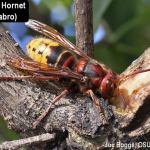 It's the time of year when queen wasps and bumble bees have emerged from hibernation and are seeking cavity sites to build their nests. An increase in wasp calls this past week means its time for a BYGL ALERT about European Hornets near the home.
Published on
May 16, 2022
Authors
Ashley Kulhanek 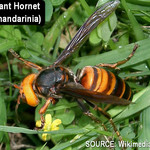 Previous BYGL Alerts noted that the Asian Giant Hornet (Vespa mandarinia) had never been officially confirmed in North America. That changed late last season when the non-native hornet was found in the northwestern corner of Washington State and just across the U.S. – Canadian border on Vancouver Island, British Columbia.
Published on
March 19, 2020
Authors
Joe Boggs
No Asian Hornets in the U.S. 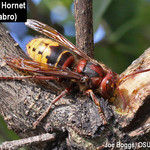 boggs.47@osu.edu Tue, 08/28/2018 - 17:04
When you read or hear about "Asian hornets," you need to keep two things in mind. First, the "Asian" moniker has been commonly applied to at least three hornet species native to various Asian regions. The second thing to remember is that none of these hornets have been found living in the U.S.
Published on
August 28, 2018
Authors
Joe Boggs
Subscribe to European Hornet
Ohio State University Extension