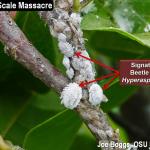 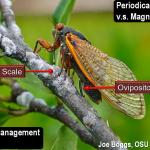 Magnolia scale is a type of "soft scale" so named because the females are hidden beneath a helmet-like soft leathery covering that provides limited protection. Soft scales can be squashed! This native insect is one of the largest soft scales found in Ohio with mature females measuring as much as 1/2" in diameter. The size and overall shape of mature magnolia scale females commonly make it a poster child for soft scales.
Published on
June 17, 2021
Authors
Joe Boggs 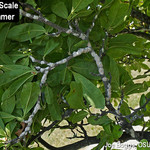 Magnolia scale (Neolecanium cornuparvum) is a type of "soft scale" so named because of the helmet-like soft leathery covering that protects the females. This is one of the largest soft scales found in Ohio with mature females measuring as much as 1/2" in diameter.
Published on
July 6, 2020
Authors
Joe Boggs
Julie Crook 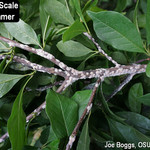 Magnolia scale females are "puffing-up" and dripping copious quantities of honeydew in southwest Ohio. This native scale has a strong affinity for non-native magnolias and associated hybrids. Common hosts include star magnolia, lily magnolia, and saucer magnolia. Native magnolias are more resistant perhaps because of natural defenses that developed through a shared evolutionary history with the scale.
Published on
June 18, 2019
Authors
Joe Boggs 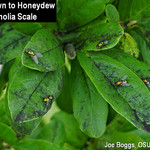 I received an e-mail Tuesday from a homeowner asking why there are a large number of flies buzzing around their magnolia. I sent them a picture of Magnolia Scale and told them to look for this insect on the twigs and branches. They responded that they had seen the scale, but thought it was a normal part of the tree. Sneaky scales!
Published on
July 5, 2018
Authors
Joe Boggs 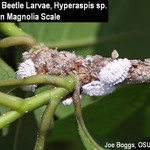 Julie Crook and I visited a magnolia in her landscape on Tuesday that is infested with Magnolia Scale. We had intended to evaluate a soft scale control method using dish scrubbers to physically remove the scales. I learned about this scale suppression technique from Dan Potter (University of Kentucky Entomology).
Published on
June 1, 2018
Authors
Joe Boggs
Julie Crook
Subscribe to Magnolia Scale
Ohio State University Extension