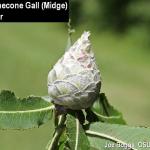 The improbable looking but appropriately named Willow Pinecone Galls are now large enough to be very noticeable on their namesake host. As the common name suggests, the galls closely resemble pine cones with closed seed scales. They are produced on willow by a gall-midge but cause little damage to the overall health of their namesake host.
Bug Bytes
Published on
July 19, 2017
Authors
Joe Boggs

Two Cats on the Prowl 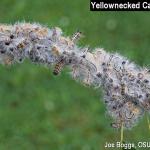 Two general defoliators are producing damage in southwest Ohio: yellownecked caterpillars and walnut caterpillars. Both of these caterpillars feed in groups, or "colonies," of 10-30 individuals throughout their development which is why their defoliation is often focused on a single branch or a group of adjoining branches. However, it's also why multiple colonies can quickly defoliate small trees.
Bug Bytes
Published on
July 18, 2017
Authors
Joe Boggs 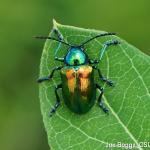 Dogbane is the representative species for the dogbane family, Apocynaceae, which includes milkweeds and other plants that ooze milky sap ladened with poisonous alkaloids. Indeed, Apocynum translates to "poisonous to dogs," or "dog killer." Sap from the plant is reported to have been used against ravenous feral dogs.
Bug Bytes
Published on
July 18, 2017
Authors
Joe Boggs

Check out The OSU Cultivar Trials in VR Mode 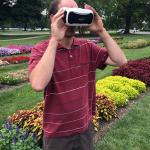 For 2017, a new program is available at the Ohio State University Cultivar Trial garden that offers a 360˙ panorama tour for anyone who uses a computer, cell phone, tablet or  a VR headset.
News & Alerts
Published on
July 17, 2017
Authors
Tim Rhodus 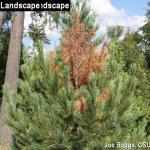 White pine weevil larval feeding damage is now evident throughout Ohio. Look for brown, wilted main shoots (terminal leaders) with the tips sometimes curved into a "shepherd’s crook." There is one generation per year and localized populations may be reduced by removing and destroying the infested terminals before new adult weevils emerge.
Bug Bytes
Published on
July 17, 2017
Authors
Joe Boggs 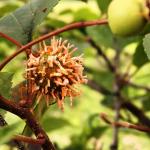 Let us call this A Case of Gallignostics. Plant galls are defined as abnormal plant growths caused by a gall-maker; the gall-maker being certain insects, mites, fungi, and bacteria. From horned oak gall to bacterial crown gall, from maple bladder galls to cedar-apple rust galls, there are many galls of interest to horticulturists. Relative to all this, Joe Boggs recently got an e-mail from Michael Goldman of the Grange Insurance Audubon Center:

I'm a big fan of the BYGL, and found something here that might be interesting for it.  The pictures I took look like some...

A Stinging Commentary on Wasps, Yellowjackets, and Baldfaced Hornets. 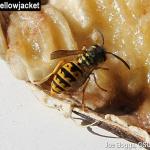 Paper Wasps, Yellowjackets, and Baldfaced Hornets are beneficial insects. Just keep repeating that to yourself when you're being chased or stung by these hymenopteran marauders! They’ve been with us since the beginning of the season. However, this is the time of the year when their ever-expanding nests become large enough and contain enough individuals to make their presence sometimes painfully known.
Bug Bytes
Published on
July 15, 2017
Authors
Joe Boggs 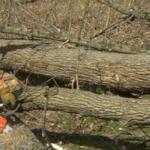 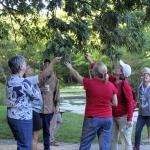 This Ohio Woodland Stewards Program spends the day with Extension specialists to diagnose some common and not so common tree problems. Learn what trees need immediate attention from what is just cosmetic and won’t compromise the health of the tree.

Ask questions and get answers and find...

Creeping Flecks of Gold and Animated Piles of Frass 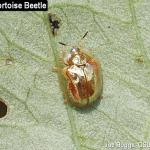 Look closely at the leaves of ornamental sweet potatoes, morning glories, or bindweed for flecks of gold creeping across the lower leaf surfaces; those would be Golden Tortoise Beetles (Charidotella sexpunctata). They are also called “sweet potato beetles” because of their common occurrence on both cultivated and ornamental sweet potatoes and “goldbugs” because of their appearance.
Bug Bytes
Published on
July 14, 2017
Authors
Joe Boggs
Subscribe to