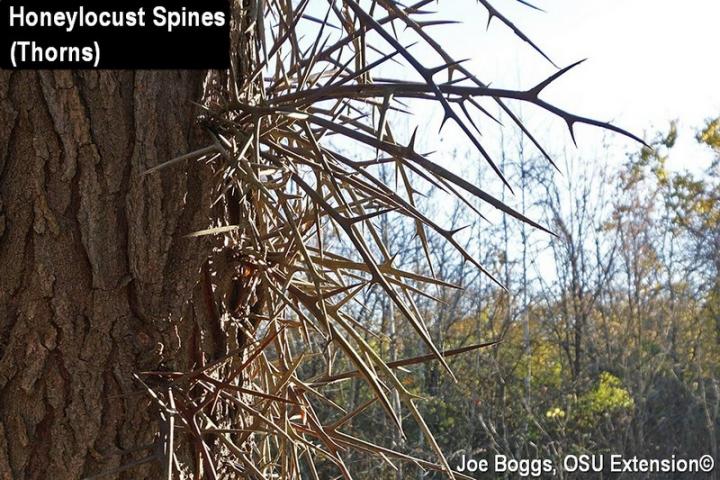 This is a great time of the year to slow down, sit down, and contemplate answers to big questions. Like, what do honeylocusts (Gleditsia triacanthos) and pronghorns (Antilocapra americana) have in common? Why do Osage orange trees (Maclura pomifera), Kentucky coffeetrees (Gymnocladus dioicus), and avocado trees (Persea americana) produce such large seed packages that, with the exception of cultivated avocados, fall to the ground to rot? In all cases, what we see now was shaped by animals that no longer exist; they are extinct.

No living North American predator can catch pronghorns as they zip around western U.S. landscapes in excess of 55 mph. However, their apparent waste of energy makes sense if you consider that they are still being chased by the ghosts of American cheetahs (Miracinonyx spp.). The trunks of honeylocusts are adorned with wickedly large pointed spines to defend against the phantom trunks of American mastodons (Mammut americanum). Pronghorns and honeylocusts evolved effective defenses against formidable animals that no longer exist.

Big fruits were for enticing big animals; megafauna. Mastodons, mammoths, camels, rhinoceroses, gomphotheres, and giant sloths once trampled the ground from the Pacific coast of Washington to the Atlantic coast of Florida. These megafauna could take mega bites and large fruits rewarded both beasts and plants. Megafauna served as high capacity moving vans for spreading seed; a dispersal mechanism known as endozoochory.

These megafauna left the North American scene relatively recently; somewhere between 13,000 and 9,000 years ago depending on the species and the location. Woolly mammoths (Mammuthus spp.) left their last fresh footprints on Earth on Wrangle Island located between the Chukchi Sea and East Siberian Sea somewhere around 4,000 years ago.

The mega-extinction of megafauna was witnessed by our Neolithic ancestors; perhaps they even had a hand in it. Regardless, the animal extinctions were very recent relative to the evolutionary time scale. Many plants and animals still live in the shadows of their extinct coevolutionary partners. Natural selection has not had time to reduce, modify, or erase characteristics that once bestowed great rewards. 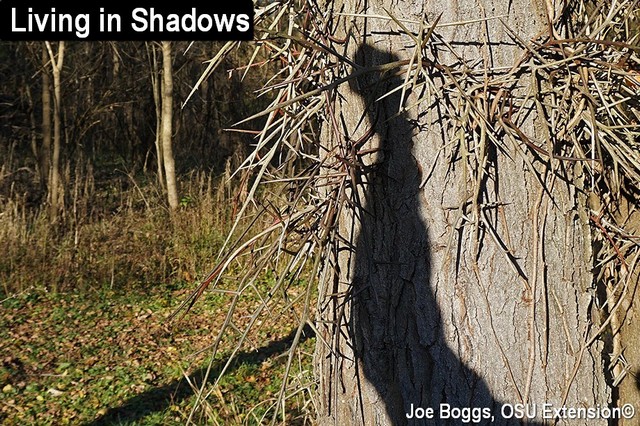 Osage orange trees, Kentucky coffeetrees, and avocado trees continue to produce large seed packages in expectation that some large animal will reward their efforts by pooping out their off-spring in far off locations. You can thank giant sloths for having to deal with the huge avocado pits the next time you make guacamole. 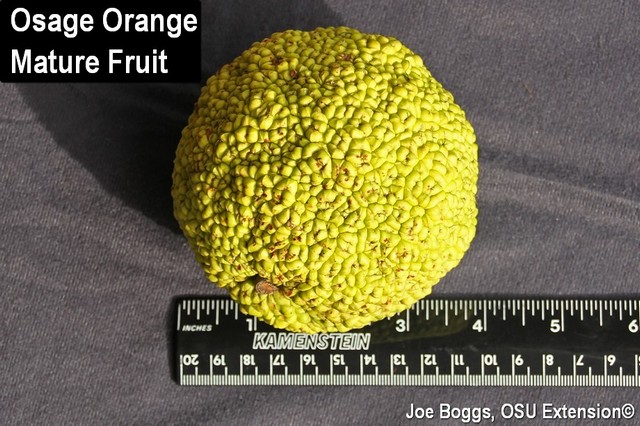 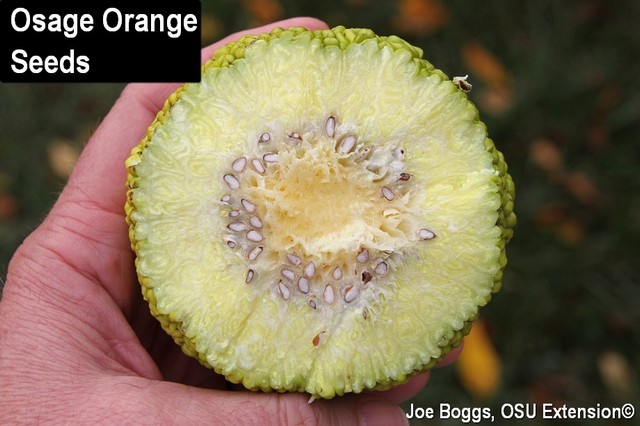 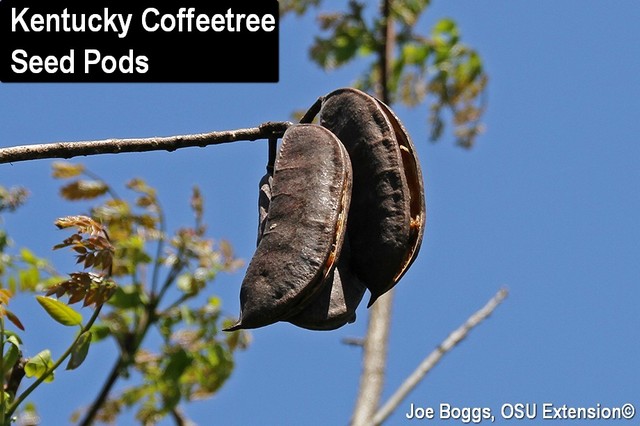 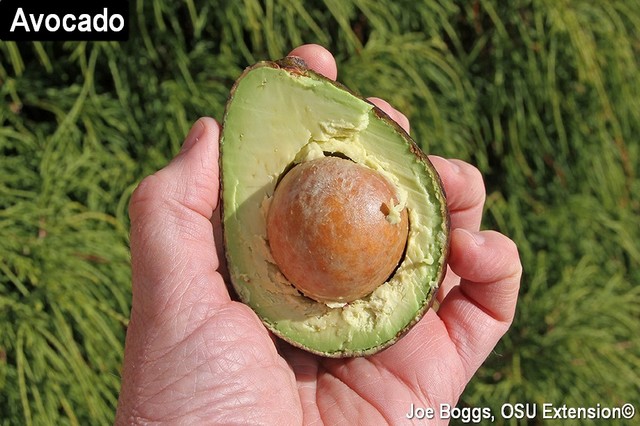 The theory that many seemingly nonsensical plant adaptations are associated with extinct animals was first proposed by Daniel Hunt Janzen (University of Pennsylvania) and Paul Martin (University of Arizona). They published the fruits of their scientific labors in the journal Science in 1982; I've included a link to their paper [see Neotropical anachronisms: the fruits the gomphotheres ate, in "More Information" below].

You can get a good "taste" of the book's content by reading an article published by Barlow in Arnoldia in 2001 and a useful book review published in BioScience by John Bois, also in 2001 [see Anachronistic Fruits and the Ghosts Who Haunt Them, and Anachronistic Relationships, in "More Information" below.].

My earlier use of the word "ghost" is a not-so-subtle homage to Barlow. She also coined the term "ecological anachronisms" which nicely summarizes the out-of-time relationship between the current and the extinct.

My visit was graciously hosted by Dr. Glenn Storrs, Associate Vice President, Collections and Research. It was an eye-opening visit on many levels with Glenn sharing his considerable knowledge and allowing me to photograph some mastodon teeth in their collection; some were collected in Kentucky not far from Cincinnati. 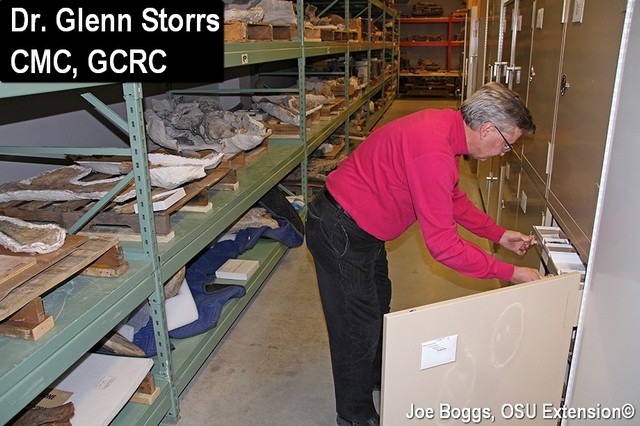 The first thing Glenn pointed out were the points on mastodon teeth. Dentition speaks volumes to how an animal makes (or made) a living. Consider the effects of being bitten by a wolf compared to being bitten by a cow. The name "mastodon" is attributed to French naturalist Georges Cuvier in reference to the nipple-like projections on the extinct animal's molars; "mastodon" comes from the Greek for "breast" and "teeth." 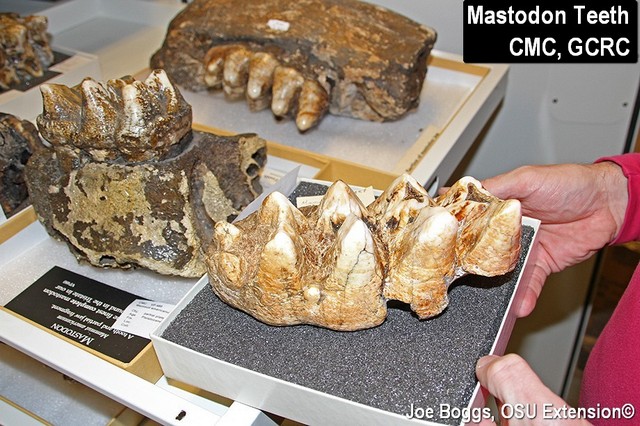 Glenn noted that the mastodon's dentition clearly shows these animals were browsers; the points on their molars allowed them to "cut and grind" woody tissue. On the other hand, Glenn pulled a woolly mammoth molar from the Research Center's collection to demonstrate that these animals were grazers; their washboard-like molars indicate they were "mash and grind" feeders best suited for grasses. Of course, I could easily imagine woolly mammoths nudging against mastodons to harvest Osage orange fruit; wouldn't that have been something to see! 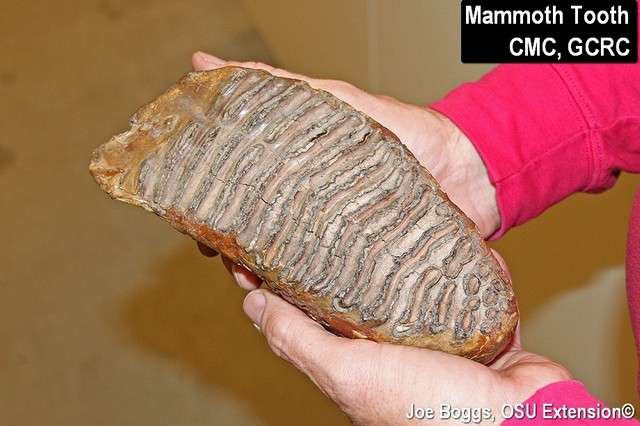 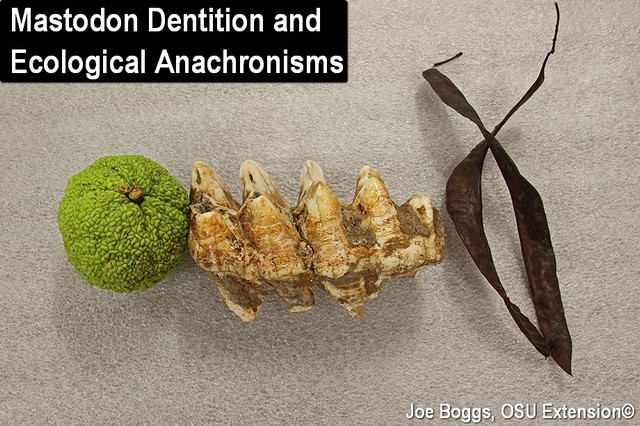 Honeylocust trees get their common name from their seed pods. The "honey" comes from the high sugar content of the sweet, sticky pulp in the seed pods. The "locust" comes from the overall appearance of their seed pods which look very similar to those produced by Black Locusts (Robinia pseudoacacia), another member of the Pea Family, Fabaceae. Of course, the reason honeylocust is written as a contraction is because the trees are neither honey nor a locust (e.g. mayapple, pineapple, etc.) 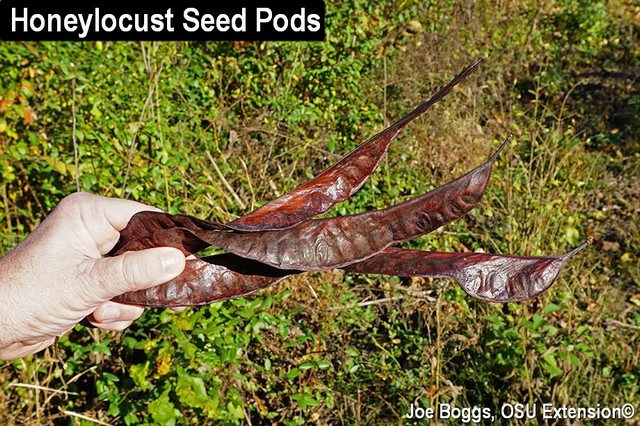 There is no doubt that mastodons ate honeylocust seed pods; remnants have been found in their preserved gut contents and manure. Imagine the sweet tasting seed pods dangling just out of reach of the probing proboscis of a mastodon. These huge beasts were perfectly capable of simply pushing over even large trees for a sweet treat.

Enter natural selection: huge spikes on the tree trunk would be a great deterrent. In fact, the specific epithet, triacanthos, translates to "three-parted thorns." The connection between marauding mastodons and the rise of spikes on honeylocusts is a matter of conjecture; however, Glenn pointed something out to me that I had never noticed before. The spikes start a few feet from the ground and end at about the highest reach of a mastodon; the greatest concentration are located where they provide maximize protection against a mischievous mastodon. 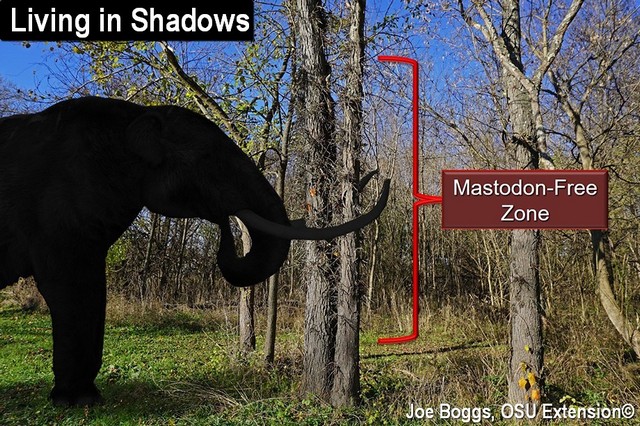 Of course, honeylocust trees still needed mastodons to dine on their seed pods; that's probably why they're sweet. However, it would be best to wait until the seeds ripened, dropped to the ground, and ultimately into the mouths of mastodons. The honeylocust seeds would then be transported distances from parent trees and "prepped" for germination: the seeds are surrounded by a thick, tough seed coat broken down by the chemical brew in the mastodon's gut. 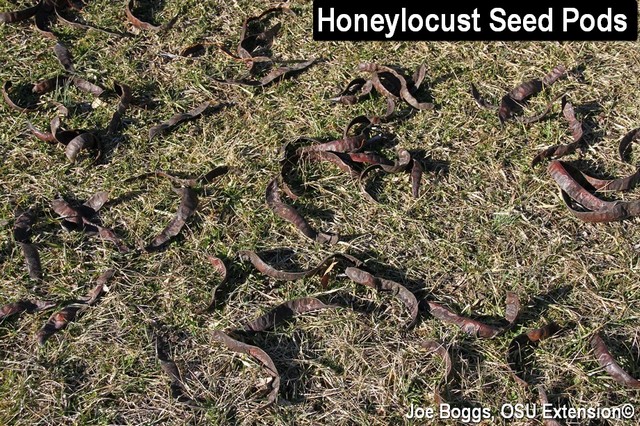 A Honey of a Story:

As I left the Geier Collection and Research Center, I noticed a large "thornless" honeylocust planted in the curb strip next to their parking lot. I wondered how the defenseless tree would have fared against the hungry ravages of massive mastodons. Indeed, the complete scientific name for thornless honeylocusts is Gleditsia triacanthos var. inermis; the varietal name inermis is Latin for "defenseless," or "toothless." 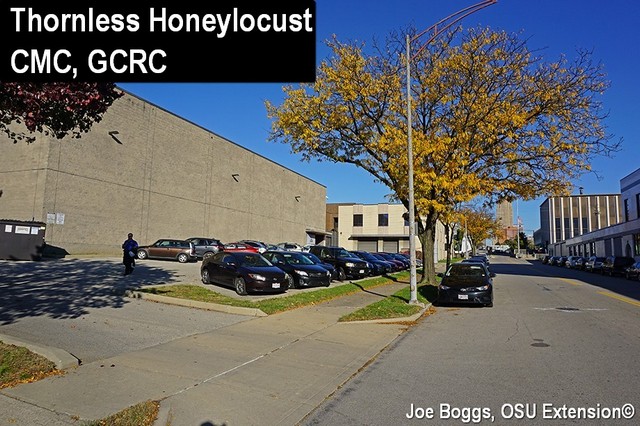 The very first thornless honeylocust brought to market was Moraine Honeylocust (Gleditsia triacanthos var. inermis 'Moraine'). I love the story behind this tree for a number of reasons including the fact that I live about 23 miles from Moraine, OH. 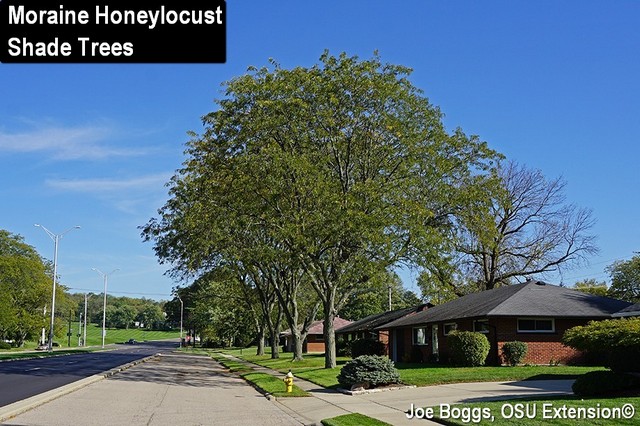 Moraine honeylocust was developed by the Siebenthaler Company of Dayton, Ohio. They were issued Plant Patent 836 for this tree in 1949. It was the first shade tree to ever receive a plant patent. The origins of the tree tells an interesting story regarding the inherent genetics behind the thorns.

The first thornless tree was discovered by Clarence (father) and Bob (son) Siebenthaler as Clarence was driving his son back to college (Michigan State; this is only a partial Buckeye story). The two collected bud wood from the "wild" thornless (and fruitless) tree they had discovered and subsequently found that the propagated trees remained "true" to the parent tree's traits. The "Moraine" name was given to the new cultivar in deference to a nursery the company owned in that Ohio town. 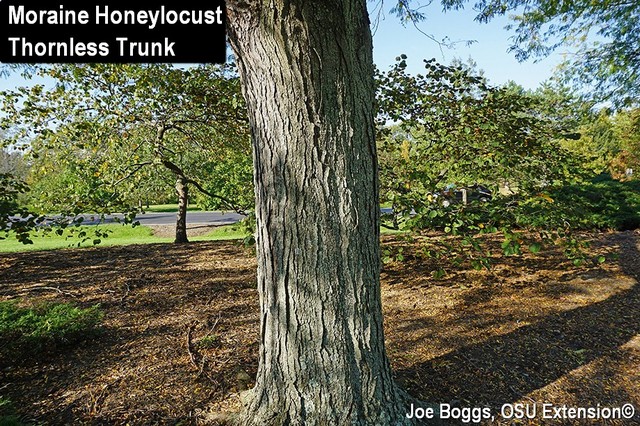 Moraine launched the development by others of a wide range of patented thornless honeylocust cultivars such as 'Shademaster', 'Skyline', 'Sunburst," and 'Imperial', to name just a few. These and other cultivars were responsible for honeylocusts rising to the top of the list of urban trees used to replace American elms (Ulmus americana) lost to Dutch elm disease. Of course, we eventually discovered that thorns weren't the only thing absent in the new cultivars; their unnatural selection produced many that had also lost the ability to fend off certain insect pests and diseases. But, that's another story. 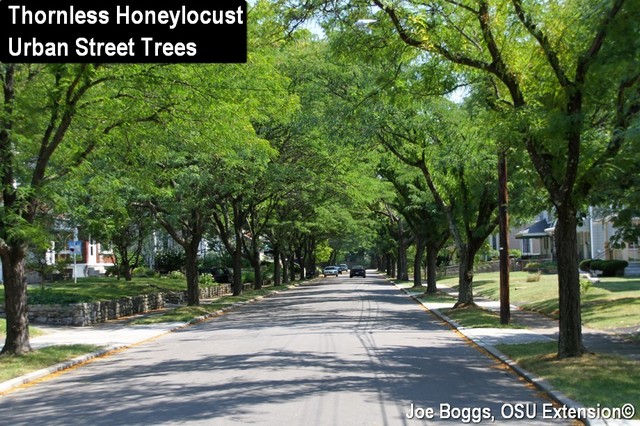 Connie Barlow in her Ghosts of Evolution book spends a considerable amount of time on the natural selection behind the development of thorns as well as the past-to-present "devolution" story behind the absence of thorns. I'm providing this teaser because her book would be a great winter-read!

I owe a debt of gratitude for the time and knowledge Dr. Glenn Storrs shared with me during my museum visit. It reminded me of our need to support our museums and the professionals dedicated to expanding scientific knowledge as well as those who design the educational displays that explain the discoveries to expand all of our knowledge.

Laid out on several long tables were numerous specimens that were being prepared for display in the Cincinnati Museum Center. Glenn shared with me that a large percentage of their funding support comes directly from proceeds earned when we pay to visit; this is true of many museums in Ohio and elsewhere. 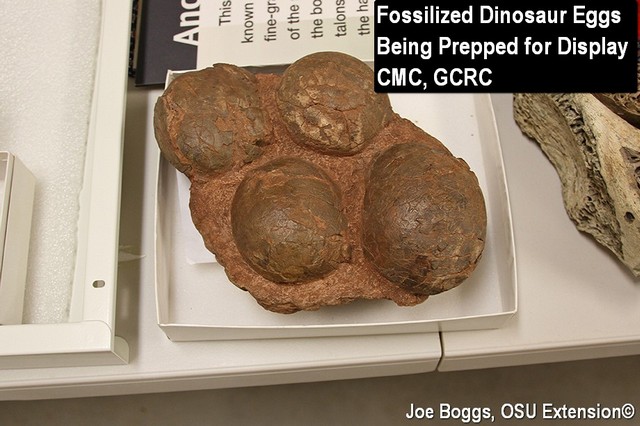 Winter is a great time of the year to visit museums to seek answers to big questions. I urge that you take time to do so; I guarantee that you will learn new things and that's definitely worth the price of admission!