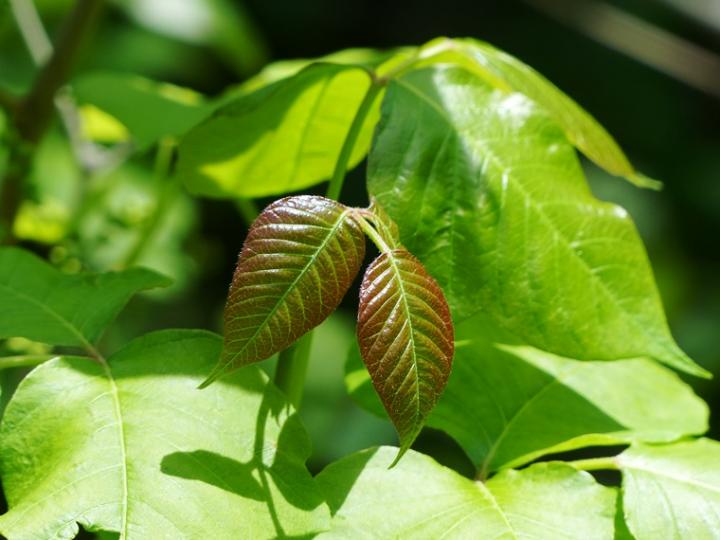 Friday the 13th has just passed and in some sort of dyslexic dystopia, the 31st is just around the corner and Halloween will soon arrive. So it seems only right to write of that which is wrong - or shall we say – wicked, as in Wicked Plants. There is an excellent book by just that title, “Wicked Plants: The Weed That Killed Lincoln’s Mother and Other Botanical Atrocities” by Amy Stewart. I recommend it, but for now, let us take a little trip into the world of some plants wicked this way come, through the house of horticultural horrors, guided by myself, and fellow OSU-Secrest Arboretoids, Paul Snyder, Joe Cochran, and Matt Shultzman.

1). Poison ivy (Toxicodendron radicans). Atop most of our lists would be poison ivy, and this is as good as a time as any to remind ourselves that the itchy immune response that some of us suffer does not end with the lovely fall color of poison ivy, nor with its cream-white berries. The itch-worthy urushiol chemical is quite present in the vines that remain on the trees through the winter, or on gloves, not to mention, at least for a while, on the fur of pets. So do not think you have a free pass. ‘Tis ever the season for poison ivy.

Speaking of urushiol, should you ever have an urge to collect the fleshy “golden apricot” arils from ginkgo trees, foraging the art-cuisinal seeds inside, wear gloves while you collect and wash away the aromas of butyric acid that surround the soft tissue surrounding the seeds. Many an edible landscaping aficionado has made the rash decision to collect and not protect - from the form of urushiol in Ginkgo biloba.

2). The Addams Family of Plants. There are several plant families running a bit to the wicked. A family of plants is an official classification of related plants, namely a group of related genera (plural). A genus (singular) is a group of related species. For example, the Solanaceae is a family of plants with numerous species of various poisonous features. Atropa belladonna, deadly nightshade is one such solanaceous plant, and featured in Amy Stewart’s book, but there are many others, from the jimsonweed (Datura species) hallucinogen/poison, to tomatoes. Yes, tomatoes: we are, thankfully, well past the time when it was thought that eating tomatoes would turn our blood to acid, but part of the tomato plant actually are poisonous – but not the fruits that we eat.

3). Tobacco (Nicotiana tabacum). It depends upon one’s perspective, but I have it on second-hand authority, at least, that the tobacco plant is wicked. Obviously indicted and convicted for a number of cancers and respiratory displeasures, this plant native to the Americas was named for a French diplomat to Portugal, Jean Nicot. Monsieur Nicot brought the strange new plant back to the French court in the 16th century. Then with a stroke of his poison pen, Linnaeus, that energetic Swedish plant-namer of the 18th century “honored” poor Jean, forever enshrining his name with our modern nicotine-stained smoke-clogged images.

We could go on and on. Devil’s walking stick, a native tree with spiny stems, stinging nettles with their urticated hairs, mandrake the aphrodisiacal wildflower, the thorned holly hedge moat surrounding the Auburn University football field, persimmon fruits that if not fully ripe will suck all moisture right out of your mouth. Enough. Wicked. For. Today.