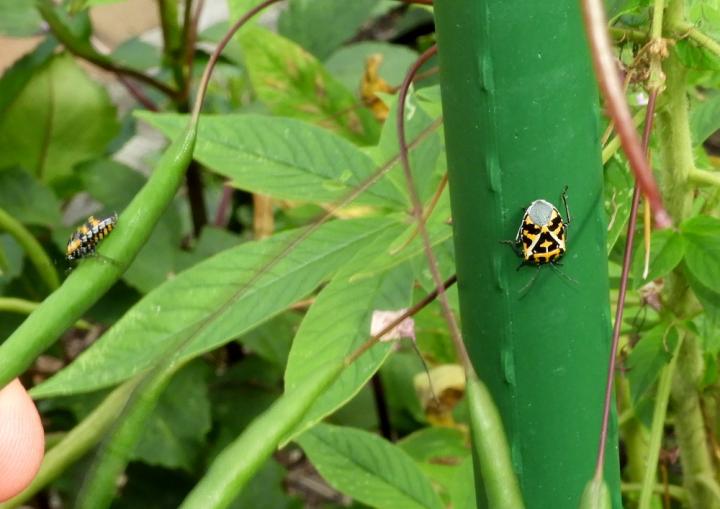 The harlequin bug (Murgantia histrionica) (a.k.a. calico bug, fire bug or harlequin cabbage bug) is a black stink bug with either yellow-orange or red markings on both its back and stomach. Additionally, there are some white markings around the edge of its abdomen.  As with all true stink bugs, it belongs to the family Pentatomidae.

Host plants of the harlequin bug include the cole crops (a.k.a. brassicas) such as cabbage, broccoli, cauliflower, turnip, collards, horseradish, and arugula. Other crops not in the Brassicaceae that may be affected by harlequin bug include asparagus, bean, cantaloupe, onion, pea, potato, squash, and tomato, and fruits such as grape, peach, pear, and raspberry.

Harlequin bug overwinters as an adult insect in sheltered locations in or near breeding sites. In spring, adults emerge from their sheltered sites, return to host plants, find mates, mate and deposit eggs on host plants, frequently on the leaf undersides. Stink bugs have piercing-sucking mouth parts.  Both nymphs and adults feed by piercing leaves, injecting saliva and sucking out liberated nutrients.

Interestingly, the harlequin bugs that sparked the writing of this BYGL Alert were observed on Cleome growing in a garden at Phipps Conservatory in Pittsburgh, PA.  Apparently harlequin bugs love feeding on cleome. This raised the question of "Why cleome?"

Cleome is a member of the family Cleomaceae. Well, that's not the family Brassicaceae or is it? Cleome was once in the family Capparaceae, until DNA studies found the Cleomaceae plants are more closely related to the Brassicaceae than the Capparaceae.  Thus, maybe it should not have been surprising that harlequin bug loves feeding on cleome!

Who knew that cleome was related to cabbage?  Apparently the harlequin bug knows!