Creeping Flecks of Gold and Animated Piles of Frass 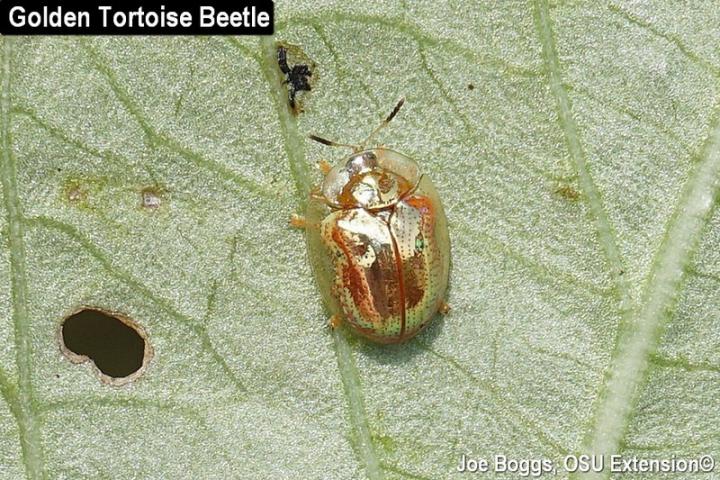 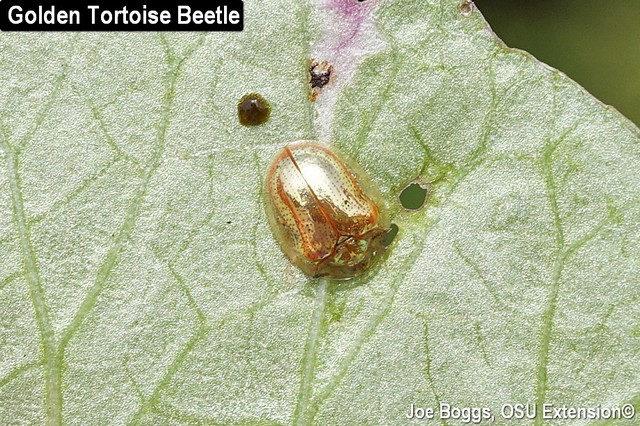 Their color is actually difficult to pin down because this is one of the few beetles that can change their colors in gecko-like fashion in response specific cues (Barrows 1979).  For example, they will change colors during mating, or if they feel threatened.  Thus, the beetles may be dressed in a spectacular molten-metallic gold, burnt orange, or deep reds.  Their colors may also mask the six dark spots responsible for their specific epithet, sexpunctata.  You can read a fascinating article about this beetle in Scientific American (2012) by clicking on the hotline under “More Information” below. 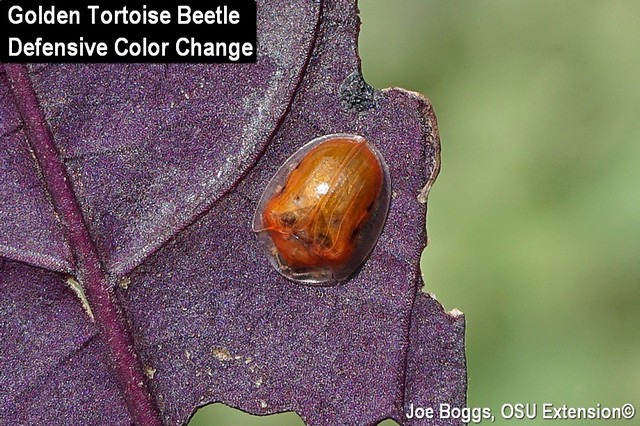 A close examination of the beetles will reveal the reason they are called “tortoise beetles.”  They are covered in a translucent shell that resembles the upper shell of a tortoise.  The gold or orange colors shine through this translucent covering.  The beetles complete their tortoise impersonation by pulling their legs and antennae under their shell when they are disturbed.  Their general appearance and defense behavior is shared with other tortoise beetles (family Chrysomelidae (leaf beetles); subfamily Cassidinae) 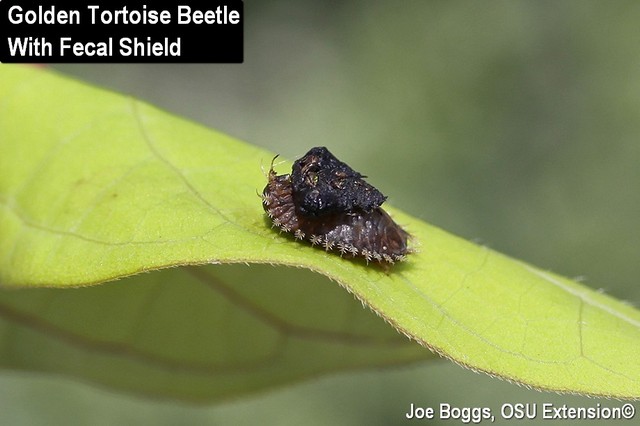 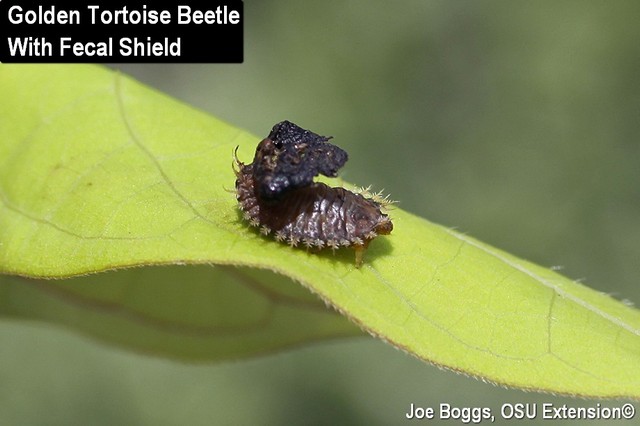 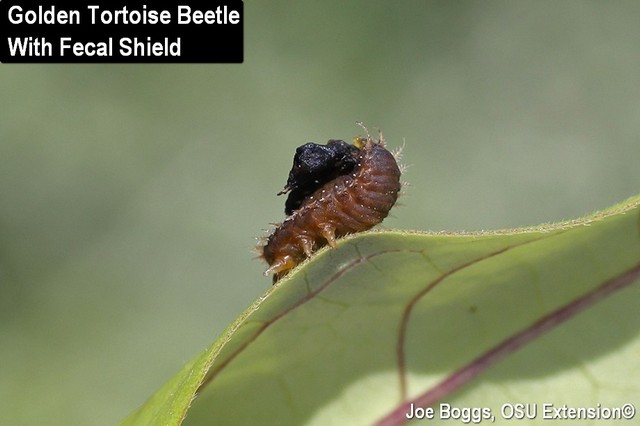 Both the adults and larvae are “specialized feeders” focusing their grazing on members of a single plant family, Convolvulaceae (bindweed or morning glory family).  Both feed on the undersides of leaves where they consume everything except the upper leaf epidermis.  The damage at first appears as oval-shaped “windows” in the leaves which become holes when the thinned epidermal tissue dries and drops from the leaf.  The holy-leaf damage is difficult to miss.  However, we are also experiencing high localized populations of Japanese Beetles (Popillia japonica) which will feed on sweet potato leaves to produce much larger, irregular-shaped holes. 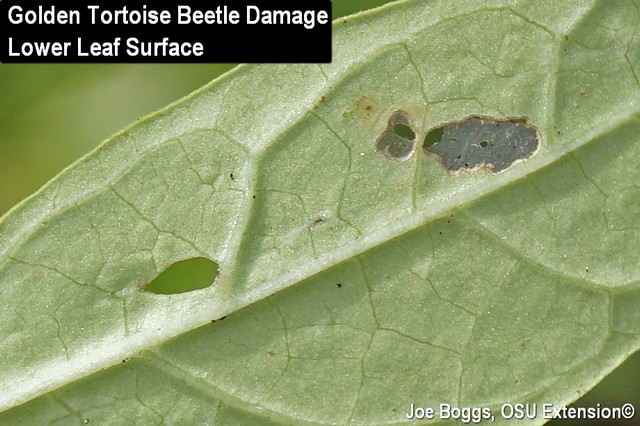 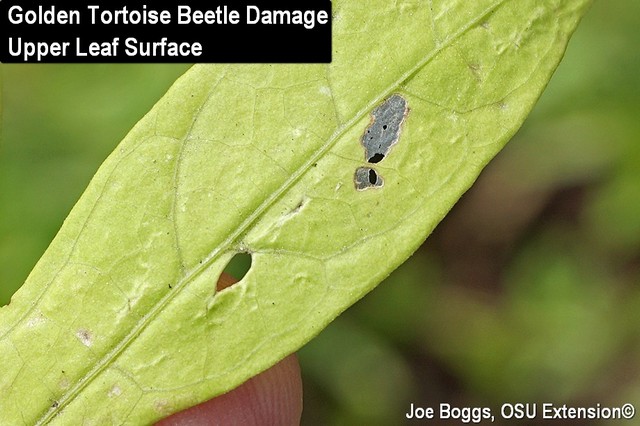 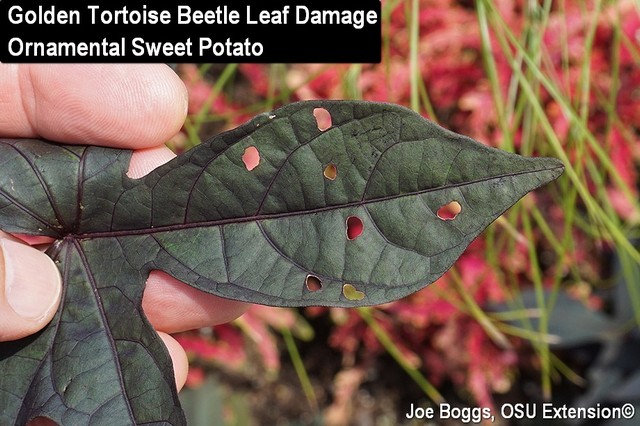 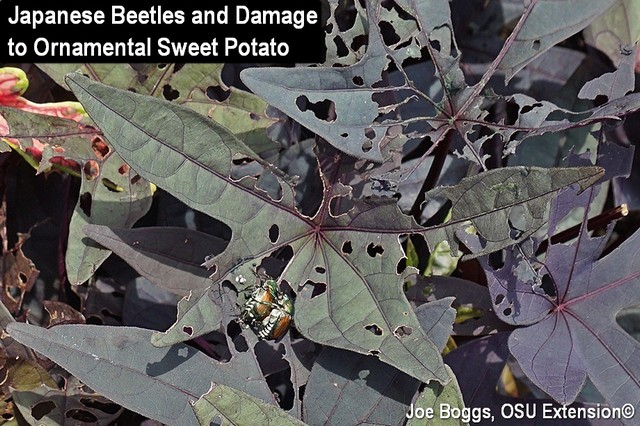 Keep in mind that despite the “potato” in the sweet potato name, the specialized golden tortoise beetles will not feed on potatoes which belong the family Solanaceae.  Likewise, despite the frequent culinary confusion between yams and sweet potatoes, the beetles will not damage yams because they belong to the family, Dioscoreaceae.  Families matter! 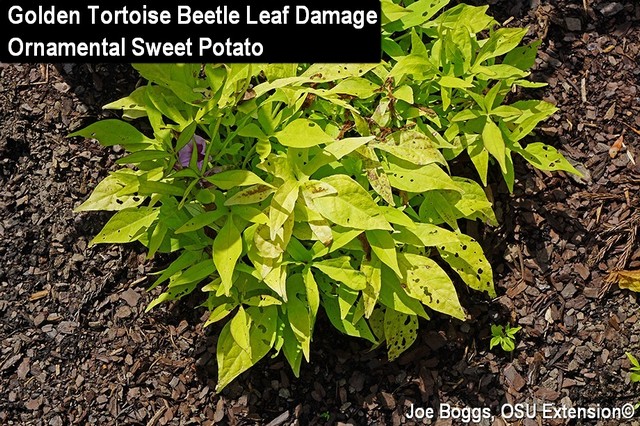 Thus far, I have not seen any damage that is heavy enough to warrant control measures.  The beetles and their damage have been more of an oddity.  Besides, the adult beetles are just about finished for the season.  They will soon go into a deep sleep (diapause) to await next spring when they will awake to mate and lay eggs.