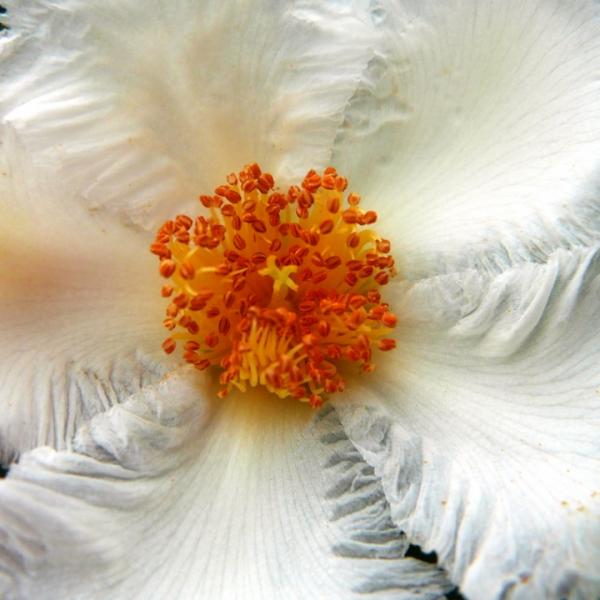 Emerson says: The Earth laughs in flowers.  Springtime, though, is when we tend to think of such mirth.   Summer is now our season, yet floral beauty continues to reign. Following are five of the boys and girls of summer.

Above is the spectacular and aromatic flower of Stewartia, a member of the camellia family (Theaceae), photographed at Secrest Arboretum where Joe Cochran, Paul Snyder, Matt Shultzman, and the legacy of Kenny Cochran, hanuve resulted in numerous stewartias planted in recent years.

Next, is chicory, Cichorum intybus, a roadside weed, with one blue blossom still alert, while the other is closed up already for the evening. I was amazed to learn years ago, while on a polder in the Netherlands, that the tulip grower with whom I stayed helped with his cash flow for the farm in winter by growing bulbs of this self-same species. He grew them in the barn in nutrient solution in the dark, harvesting the etoliated shoots for bitter slaws. Yes, cultivars of Cichorum intybus, our roadside weed and coffee substitute is also – Belgian endive.

Kim Kellogg of Grasshopper Inc. is no shrinking violet, in fact he along with his son Chad and wife Char are duly proud of their “quilt” planting of annual flowers outside the Berlin Farmstead restaurant in Berlin in Holmes County. It is quite a living representation of the craft of the local quilt makers.

Next, Calycanthus, or Carolina allspice blooms keep getting bigger and bigger, compared to the native Calycanthus florida of the Carolinas. Many hybrids with Calycanthus sinensis are now on the market and this cultivar (xSinocalycalycanthus raulstonii 'Hartlage Wine'), is planted at OSU’s Secrest Arboretum in Wooster.

Finally, I have many favorite wildflowers, from painted trillium to bloodroot, but this time of year, for me, blue-eyed grass (Sisyrinchium spp.), not a grass, but rather in the iris family (Iridaceae) ever seems to be winking at us. Enjoy the flowers of summer – with more to come.

So, the Earth indeed laughs in flowers, but as is so with many poems, a fuller reading, in this case from Emerson’s Hamatreya is not so breezy:

“Earth laughs in flowers, to see her boastful boys
Earth-proud, proud of the earth which is not theirs;
Who steer the plough but cannot steer their feet
Clear of the grave.”

Mortality wrote Emerson, though his poem lives on. And though mortality is a Munch Scream-like constant ever in the back of our minds, Emerson’s reminder is somewhat countered by the fact that the Earth is in fact, ours, as well as others. Though we do share the Earth; we are still a part, not automatically sundered from Earth and Nature. Here is some food from thought from a book I am reading, The Songs of Trees: Stories from Nature’s Great Connectors, by David George Haskell:

“We are part of the community of life, composed of relationships with ‘others’, so the human/nature duality that lives near the heart of many philosophies is, from a biological perspective, illusory.”