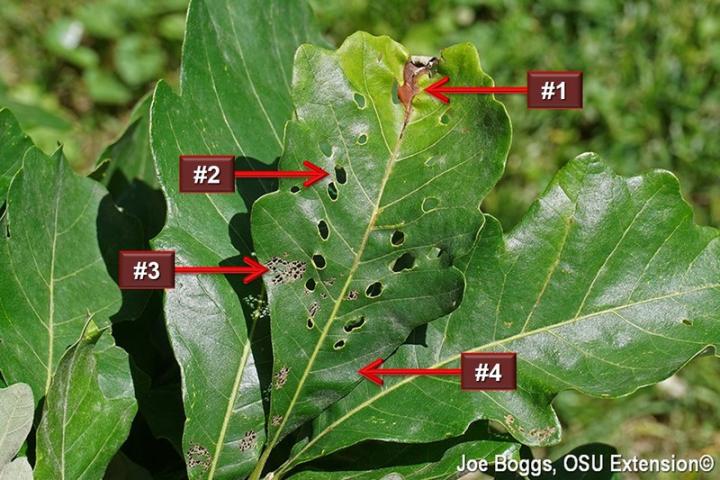 I would never recommend bringing a single tree leaf to an Extension office or garden center and asking the question, “what’s wrong with this tree?”  However, sometimes a single leaf can speak volumes.  Just accompany me or Jim Chatfield on one of our diagnostic walk-abouts (stand-abouts?) and we’ll prove it to you!

I came across this oak leaf last week in southwest Ohio that presents four diagnostic challenges in a nice, single package.  Can you diagnose the causes behind the symptoms? 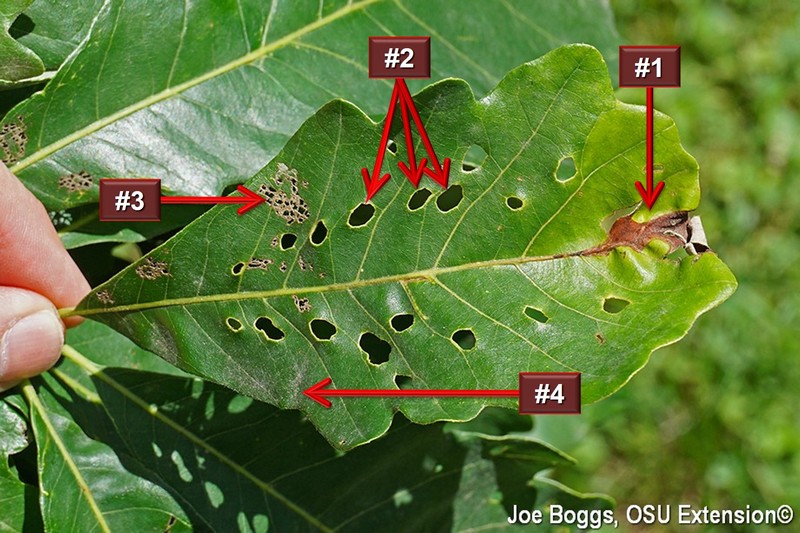 This fungal disease is specific to oaks.  The fungus (Apiognomonia quercina) behind this disease infects newly expanding leaves and infections are enhanced by cool, wet weather.  Thus, oak anthracnose is more common during seasons with cool, wet springs and symptoms are typically more prevalent on leaves of lower braches owing to less air circulation.  Although leaf infections may appear dramatic, oak anthracnose rarely causes significant harm to the overall health of established oaks in Ohio. 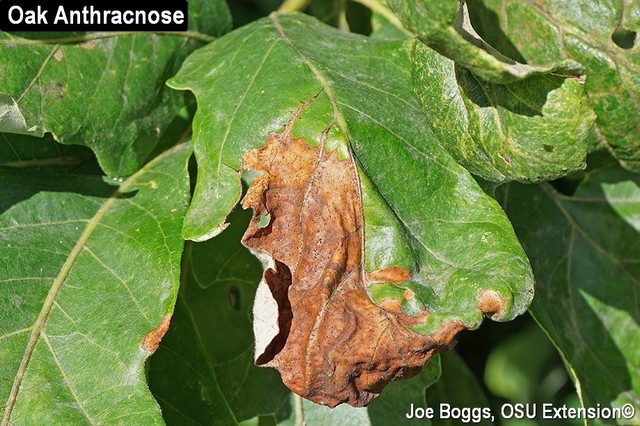 Anthracnose diseases are caused by fungi that are usually very specific to certain plant hosts.  For example Jim Chatfield posted an Alert about sycamore anthracnose last week.  The fungus behind anthracnose of sycamore and occasionally London planetree will not infect oaks, and vice versa.

The feeding behavior of the females of this tiny fly (Family Agromyzidae) produces a characteristic pattern of corresponding holes in oak leaves; note that holes on one half of the leaf match holes on the other half.  That’s because females use their sharp ovipositors to pierce swelling leaf buds in the spring.  The wounds release nutrient rich sap which they ingest using their lapping mouthparts.  The holes in the nascent leaves are minuscule but enlarge as the leaves unfurl and expand to impart a “Swiss cheese” appearance. 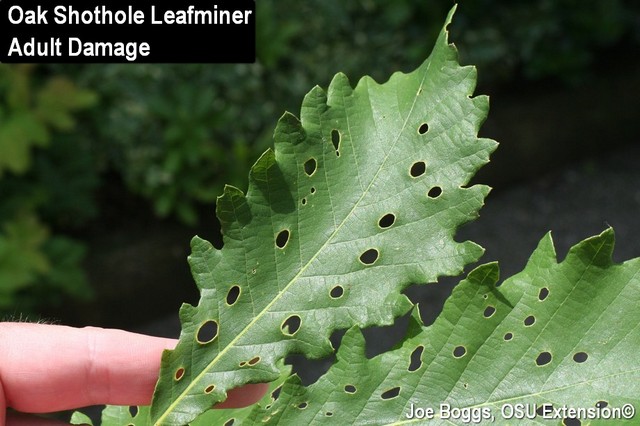 The leafmining larvae (maggots) produce dark brown “blotch mines.”  Be aware that the leafmines may be mistaken for oak anthracnose. 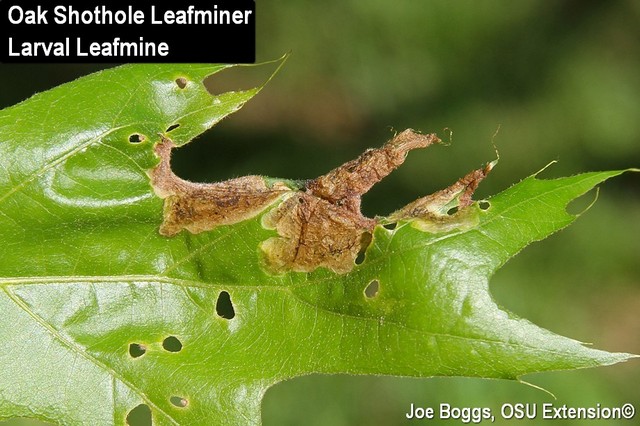 You may believe this is a “trick question” because the skeletonizing feeding damage could in fact be caused by two different leaf-feeders.  I’ll first make the case for the beetles.  Japanese beetles will feed on oak leaves and as I reported last week, we are seeing high localized Japanese beetle populations in southwest Ohio this season (see BYGL Alert!, “Japanese Beetles and Masked Chafers on the Wing” posted on June 21).  Although I didn’t find beetles on the tree, that doesn’t mean they didn’t enjoy a quick bite; perhaps an oak drive-thru (fly-thru?). 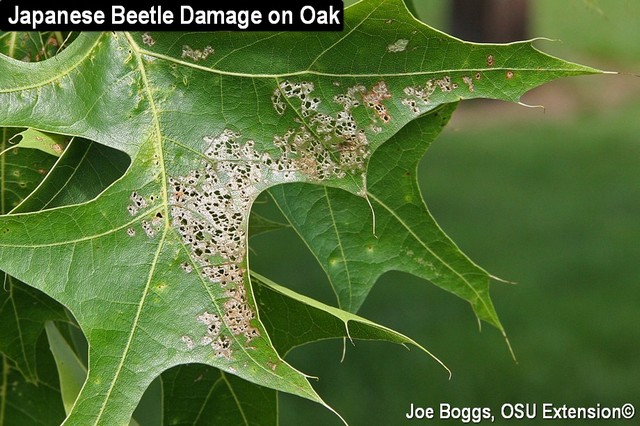 Now I’ll speak for the bagworms.  These caterpillars wrapped in silk bags festooned with host plant debris are often considered a conifer pest.  However, they will feed on over 130 species of plants including many deciduous shade trees such as oaks.  The oak tree had a sizable number of bagworms chowing down on the leaves to produce leaf skeletonizing symptoms that looked very much like Japanese beetle damage.  The take-home message is don’t jump to conclusions.  Whether it’s beetles or bags remains up in the air. 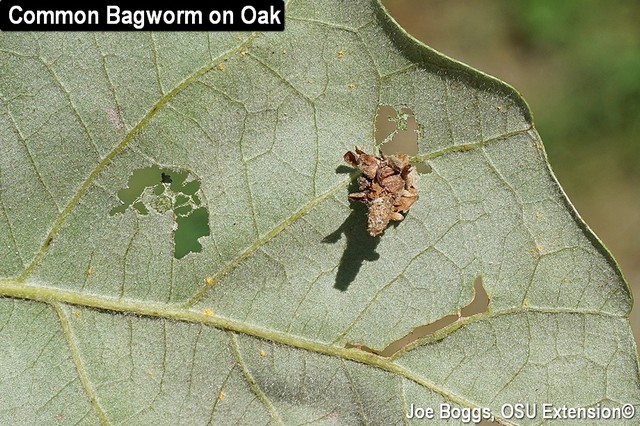 Several fungal species may appear as powdery mildews on oak.  Most often, the white mycelial signs of the disease are subtle and can be easily masked by the reflections of sunlight off of shiny leaf surfaces.   The disease may even be mistaken for dust or dirt on the leaves.  However, some powdery mildews on oak can produce severe symptoms particularly on newly emerging leaves. 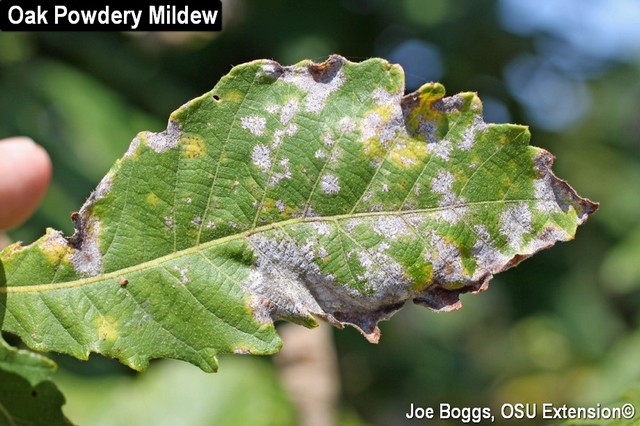 I should have taken a picture of the entire tree.  It would have helped you answer, “what is the overall health of the plant?” which is question 5 in our 20 Questions on Plant Diagnosis OSU Extension Fact Sheet (see “More Information” below).  The canopy was full and the tree appeared healthy; none of these problems were readily apparent.

How would you answer, “what is the significance of the problem” which is question 19 in our 20 Questions fact sheet?  Each of the tree problems presented above has the potential to produce noticeable leaf damage; however, they are seldom a significant problem on oak trees.  More importantly, we should measure “significance” based on the impact on the overall health of the tree rather than on noticeable damage.

Question 20: What are my recommendations?  I would recommend not worrying about any of these problems.  I used them to demonstrate several diagnostic points.  Just enjoy your 4th of July weekend by taking a hike in the woods.  Or, kick-back and enjoy a few hotdogs on the grill.