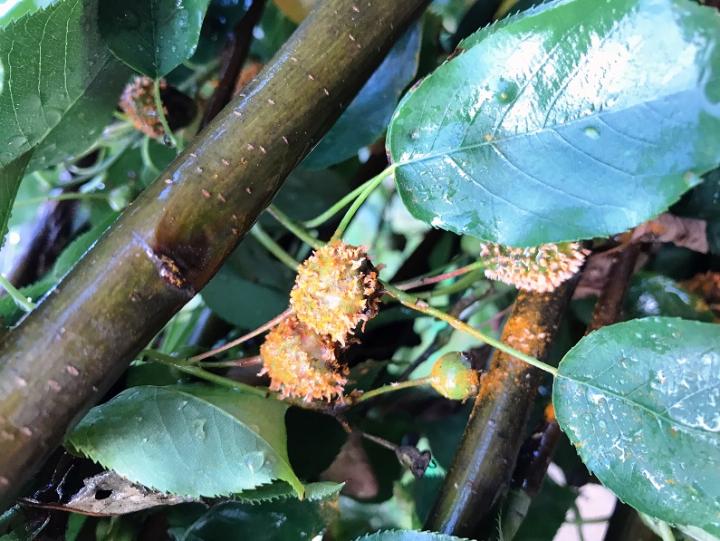 Rust on serviceberry? Yes. Has the whole world gone mad? No. It just reveals itself to each of us in manageable gulps.  We talk frequently of three “cedar rusts” on BYGL: cedar apple rust, cedar hawthorn rust, cedar quince rust, all caused by separate species in the fungal genus Gymnosporangium (bygl.osu.edu/node/781).  In fact, it is not as simple as this – there are over 40 species of the Gymnosporangium fungus.

Not only that, but there are over 480 species in 11 genera of the rose family (Rosaceae) that are affected by Gymnosporangium rusts. Again, typically we talk about only three common hosts – apple, crabapple (apples with mature fruits two inches or smaller), and hawthorn. And occasionally quinces, if someone has a quince. Nevertheless, there are other rosaceous hosts of these fungi, including serviceberry, cotoneaster, mountainash, and chokeberry.

So, when Chad Kellogg of Grasshopper, Inc. texted this morning, with the above picture of the cedar quince rust fungus (Gymnosporangium clavipes) on serviceberry (Amelanchier) fruits and a question of “Is this cedar quince rust?”, I stopped to think whether or not I had ever seen this before. Maybe, but it is certainly not common in Ohio.

Like all of these heteroecious rust diseases, the fungus goes back and forth between two different types of plants, in this case, juniper and a plant in the Rosaceae. In general, do not plant junipers near hawthorns, because cedar quince rust, generally unlike other rust diseases on hawthorn, may occur extensively on fruits and stems, rather than leaves, and thus may result in objectionable spore masses and twig death. Spray programs are available as needed on both rosaceous hosts (more typically) or on junipers.

Though as you can see below, cedar quince rust may also cause your hawthorn tree to look like Christmas ornaments in summer.

As for cedar quince rust on serviceberry – not generally a problem. Or so I claim.