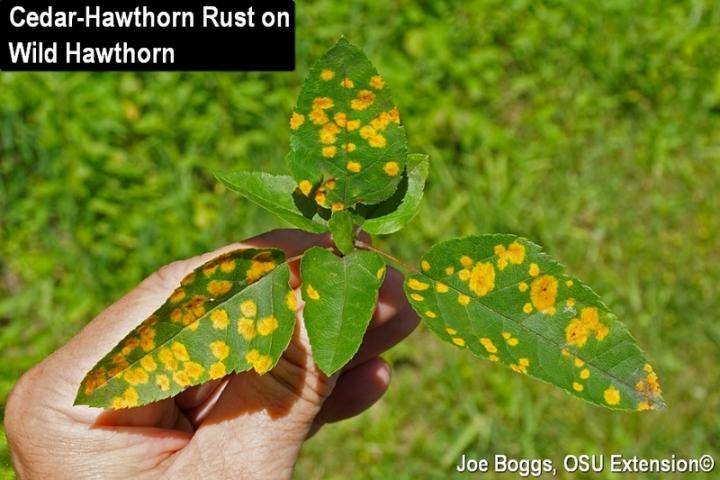 It’s easy to spot wild hawthorns growing along Ohio trails at this time of the year if they sport gaudy orange-spotted leaves.  The spots are the telltale leaf symptoms of Cedar-Hawthorn Rust and the leaf infections can cause hawthorns to stand out among other understory trees and shrubs. 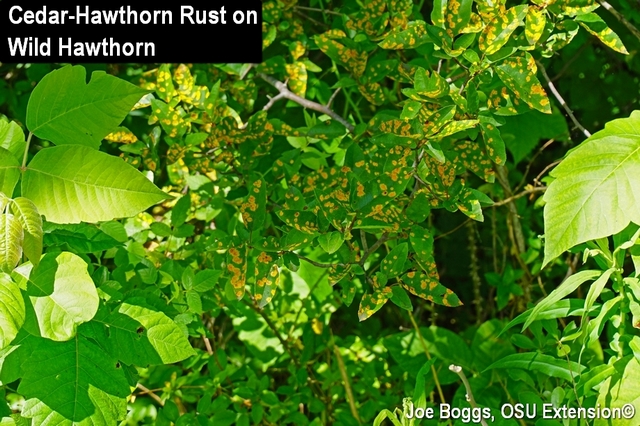 Cedar-hawthorn rust is caused by the fungus Gymnosporangium globosum.  This is one of what I call the “big three” types of rust fungi that may be found on trees and shrubs in Ohio woodlands, landscapes, and sometimes in nurseries.  The other two are G. juniperi-virginianae that produces the disease known as Cedar-Apple Rust and G. clavipes that produces Cedar-Quince Rust.  The “cedar” part of these disease names refers to eastern red cedar (Juniperus virginiana), which of course is a type of juniper; these fungi do not infect cedar.

Each of these rust fungi must alternate between a member of the plant genus Juniperus and members of the rose family (Rosaceae) in order to complete their life cycles.  The requirement to rotate between two types of widely divergent host plants coupled with the rusty color of their spores earns these fungi the collective moniker of "heteroecious" rusts.

The cedar-hawthorn rust fungus produces irregularly shaped galls on junipers measuring around 1/4 - 1/2" in diameter.  The galls may arise from the needles as well as the stems.  The cedar-apple rust fungus also produces galls on junipers; however, they occur on the stems and become much larger, sometimes measuring over 1” in diameter.  The brain-like cedar-apple rust galls are most notorious for producing long, gelatinous, tangerine orange tentacle-like “telial horns” that are extruded in the spring during wet weather. 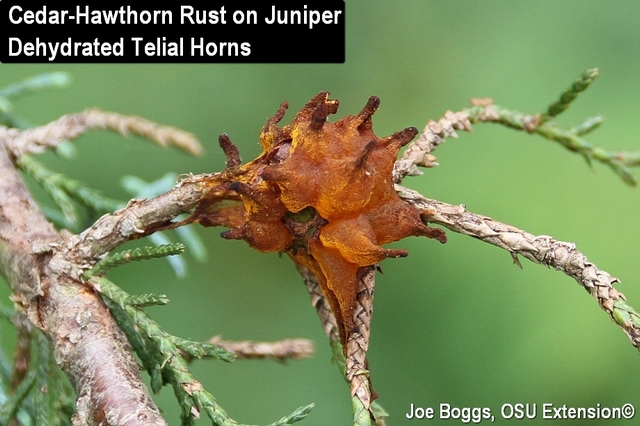 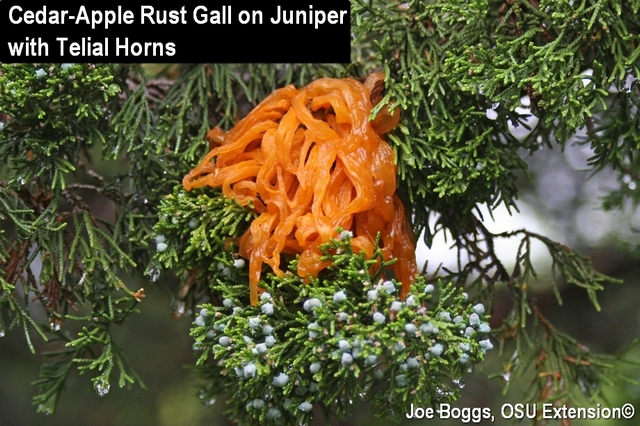 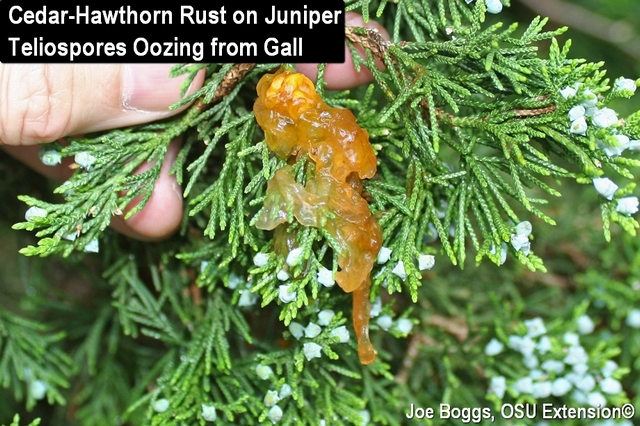 The cedar-hawthorn galls on junipers produce short, blunt, gelatinous telial horns.  During periods of extended wet weather, the telial structures may ooze mucus-like onto the stems and foliage beneath the galls.  The ooze consists of fungal teliospores that give rise to basidiospores that are ejected into the air to drift onto various rosaceous hosts where they germinate marking the beginning of the other half of the fungal life cycle.  Hawthorn is one of the alternate rosaceous hosts as well as apples and crabapples and occasionally serviceberry, quince, and pear. 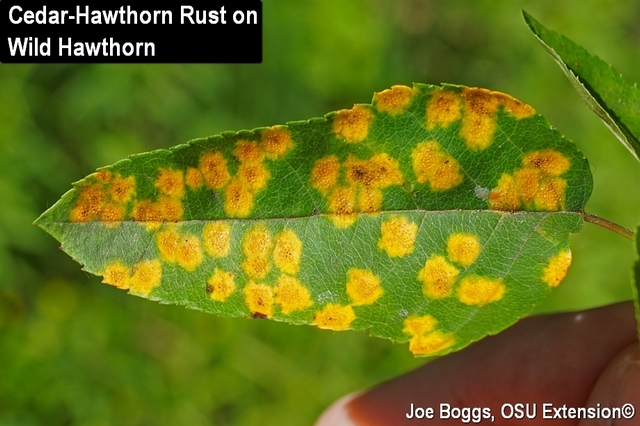 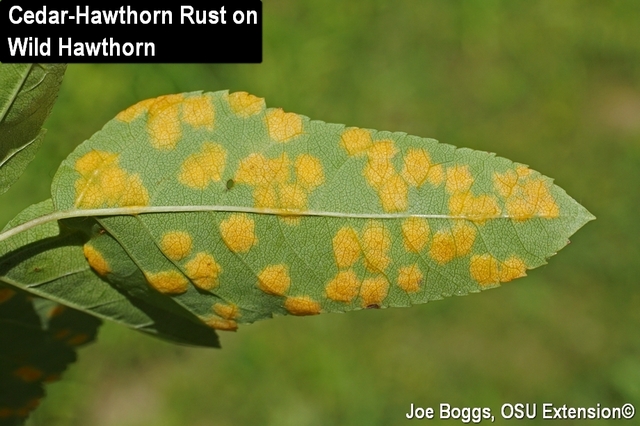 Cedar-hawthorn rust infections on hawthorn may occur on the stems and fruit; however, the most obvious infections appear as brightly colored yellowish-orange spots that contrast sharply with the dark green background color of the leaves.  The spots are evident on both the upper and lower leaf surfaces.  Eventually, tiny black dots called spermagonia appear in the spots on the upper leaf surface and short tube-like structures called aecia extend from the spots on the lower leaf surface.  Spores from the aecia, called aeciospores, drift on the wind to infect Juniperus hosts in late summer and autumn to start the alternating-host life cycle over again. 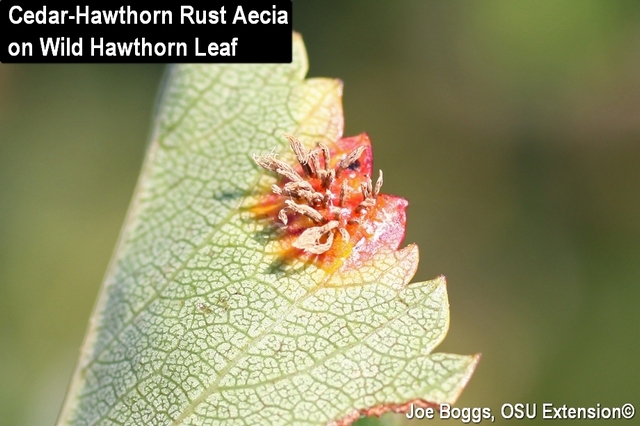