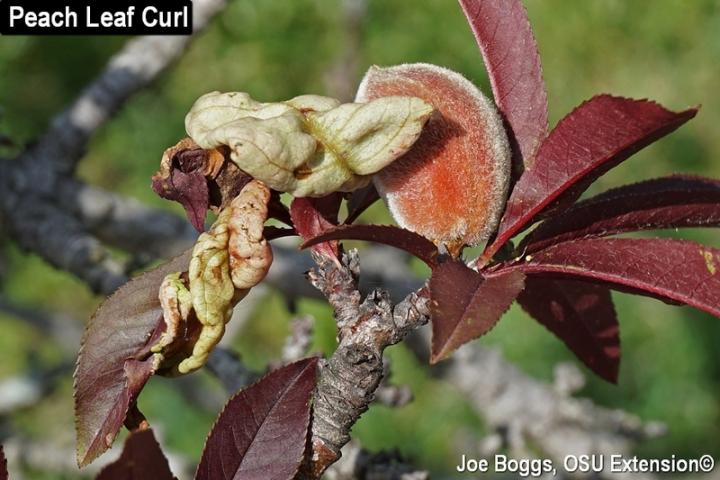 Peach Leaf Curl is a springtime disease caused by the fungus Taphrina deformans.  The fungus can infect peach (Prunus persica) as well as a few other plants in the Prunus genus.  The disease can be devastating in fruit orchards, but it can also appear on ornamental (flowering) peach trees in landscapes and nurseries; the "ornamental" designation does not impart resistance.

The fungus can infect flowers, leaves, young twigs, and fruit.  Symptoms on the small fruit of ornamental peach trees may go unnoticed, but infections can cause extensive fruit drop; this is a real problem on the fruit pie versions of peach trees.  Twig infections lead to swollen, canker-like symptoms that can cause stunting and dieback.

However, the real show-stopper are the symptoms caused by leaf infections.  Infected leaves become reddened, distorted, curled things that hang claw-like on the trees.  The infected leaves will eventually take-on a grayish-white "powdery mildew appearance" as spores are produced on the leaf surface.  Ultimately, the affected leaves turn yellow or brown and drop from the tree.  Heavy spring defoliation can cause severe stress leading to a susceptibility to other problems including a number of after-the-fact borers. 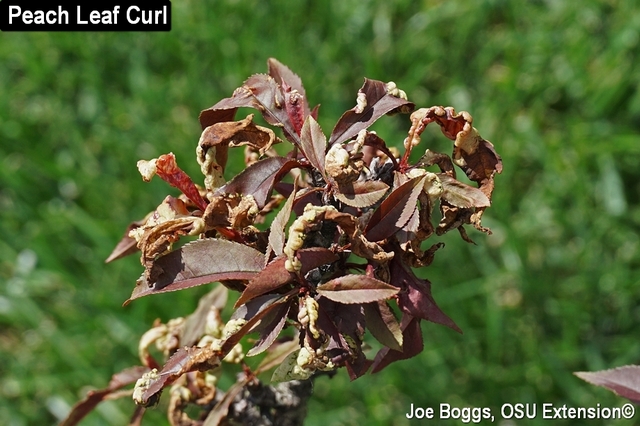 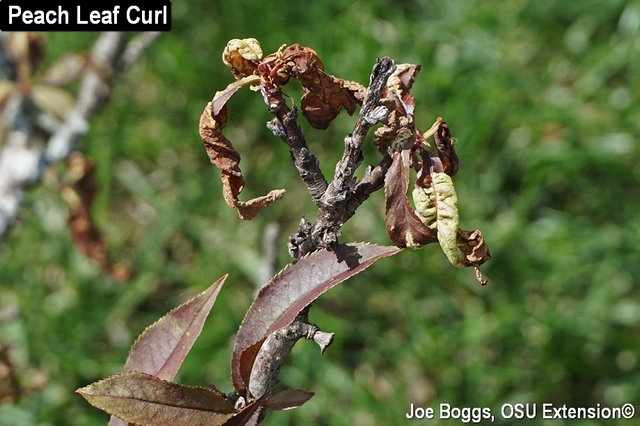 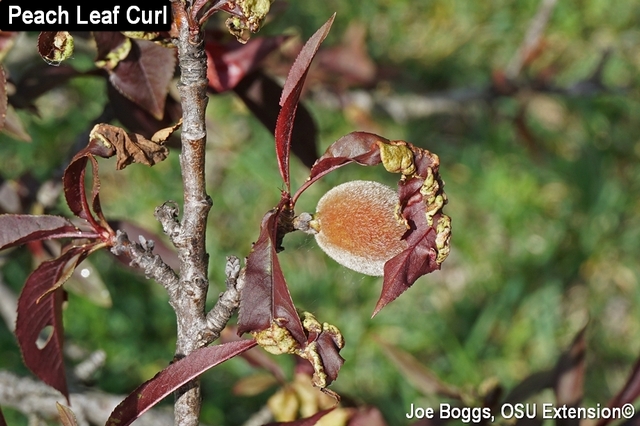 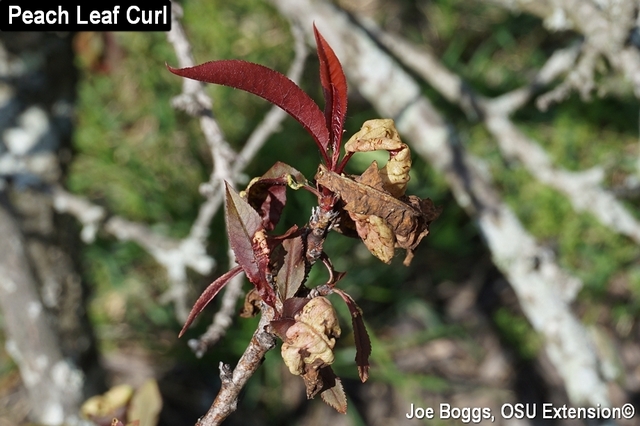 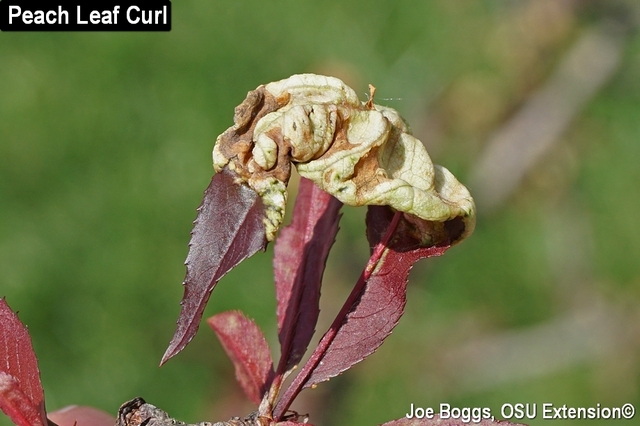 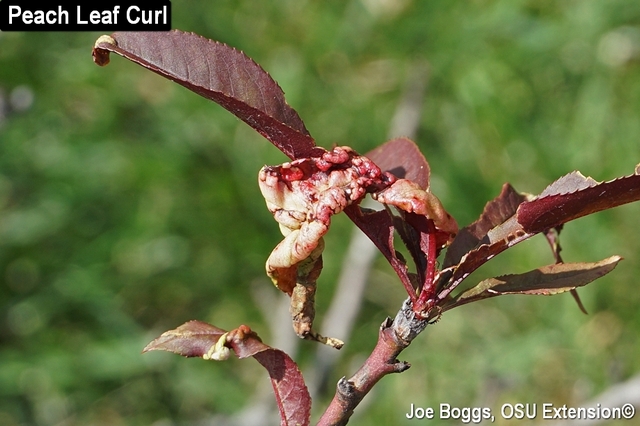 I noticed over the weekend that one of my neighbor's two ornamental peach trees in his landscape in southwest Ohio is being hammered by peach leaf curl.  The two trees are the same cultivar and located only about 50' apart, but only one tree is infected.  He does not have an irrigation system nor has he needed to water his trees this spring; we've had plenty of rainfall! 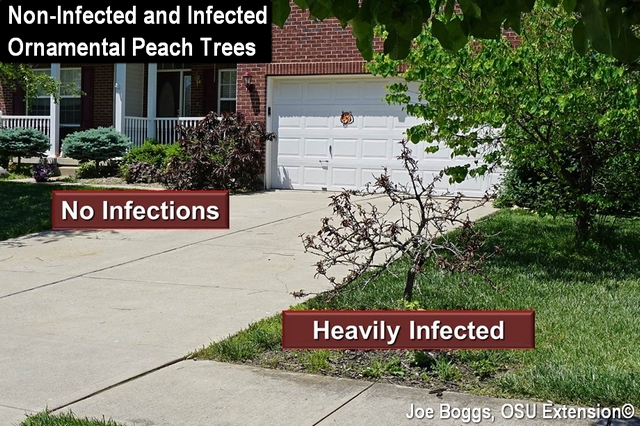 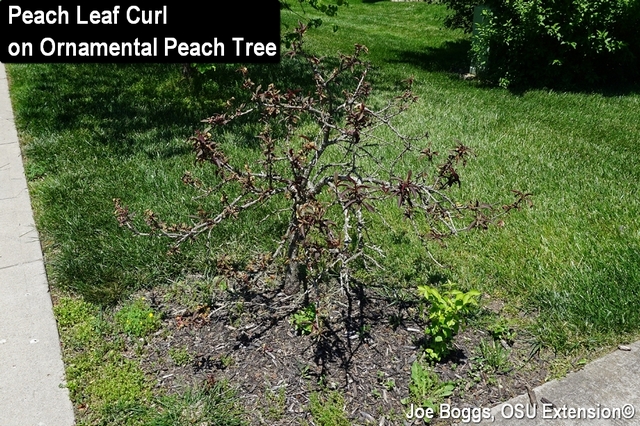 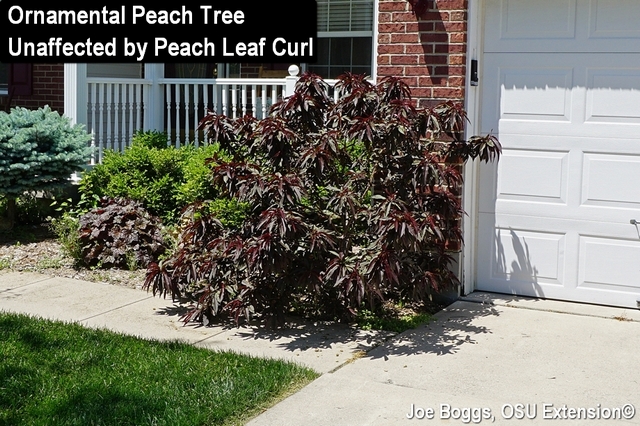 I used the "Disease Triangle" to explain to him why it could be possible for one tree to be infected while his other tree remains disease free.  The Triangle illustrates that three things must be present in order for a plant disease to develop:  the pathogen; a susceptible host; and environmental conditions that support infection and disease development.  The beauty of the Triangle is that if you remove only one of these three conditions, the disease will not develop.  I could tell that my neighbor was fascinated because he kept closing his eyes to better concentrate on all aspects of the Triangle. 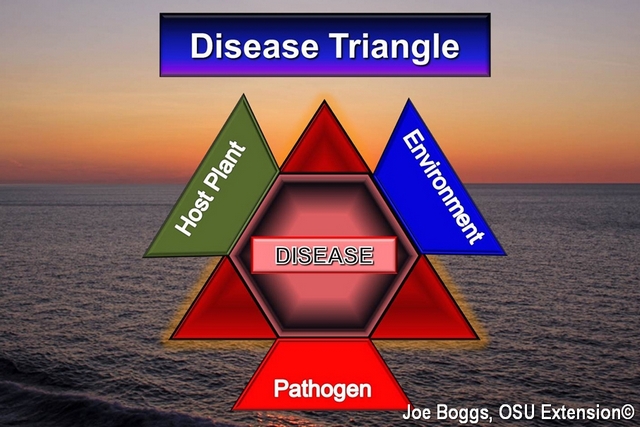 Obviously, two sides of the Triangle were present in my neighbor's landscape:  a susceptible host and the pathogen.  However, I believe microclimates within his landscape played a critical role in supporting or preventing disease development.  Quoting from the University of California, IPM fact sheet titled "Peach Leaf Curl": Wetness from rain, dew, or irrigation for more than 12.5 hours at temperatures below 61°F is needed for infection. Maximum infection occurs when trees are wet for 2 or more days. Although leaves can be infected, symptoms might not appear if temperatures remain above 69°F. Cool weather prolongs the period of disease development by favoring the pathogen and slowing leaf growth. Development of peach leaf curl ceases when young tissue is no longer developing or when weather turns dry and warmer (79° to 87°F).

Peach leaf curl is rarely an every-year occurrence, even in fruit orchards, because spring infections require such a specific cascade of environmental conditions.  Perhaps my neighbor's tree located next to his home enjoyed better canopy drying conditions and/or less foliar moisture since it is partially shielded by the overhang of my neighbor's home.  Regardless, sometimes luck is a matter of inches, or in this case, feet.

Although there is a probability that environmental conditions will not support heavy leaf infections next season, I've advised my neighbor that he should consider addressing the "pathogen" side of the Triangle through well-timed fungicide applications early next spring starting at bud break.  Of course, I urged the he read and closely follow product label directions.  Peach leaf curl can be effectively managed using several professional and over-the-counter fungicides labeled for use on fruit trees.  Preventive sprays are warranted if severe leaf damage occurred this season.