Oak "Apples" and the Gall-Making Process 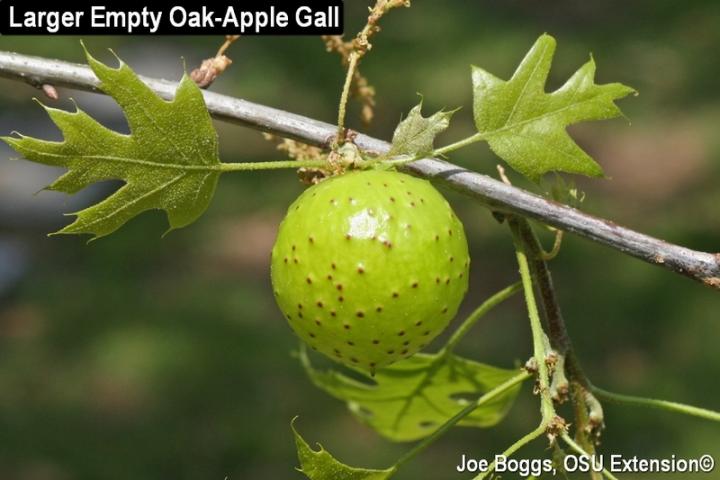 Several types of "oak-apple" galls are now obvious on their namesake oak hosts in southern and central Ohio.  These unusual plant growths range in size at maturity from 1/2 - 2" in diameter and are named for their resemblance to apples.  The galls are constructed of various plant parts that have been hijacked by a gall wasp (Family Cynipidae) to surround a single wasp larva located within a seed-like structure positioned at the center of the gall. 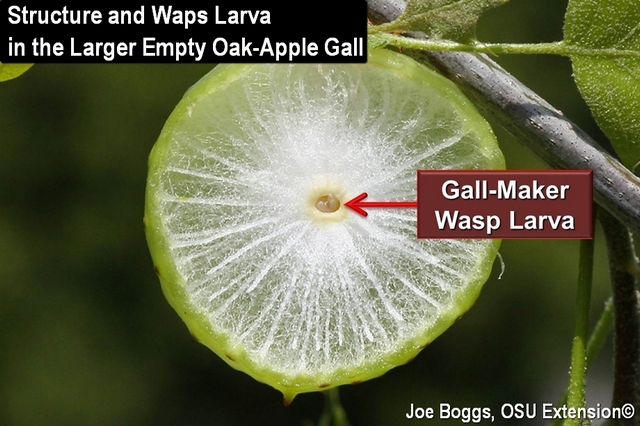 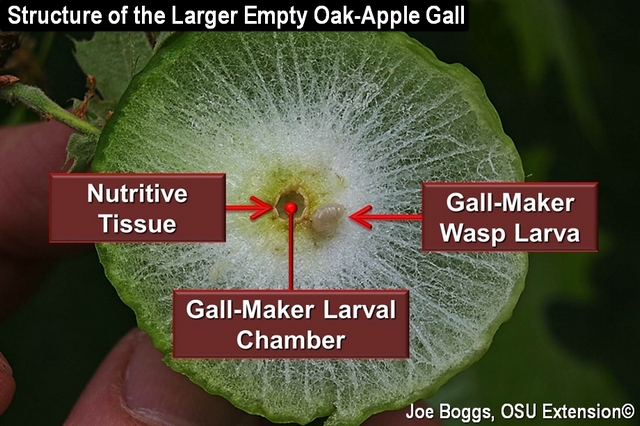 Of the over 800 different gall-makers on oaks; over 700 are gall wasps.  In other words, when trying to identify an insect gall on an oak, there is a high probability it was produced by a gall wasp.  There are over 50 species of gall wasps that are known to produce oak-apple galls in North America and there are probably at least 10-15 distinct species of oak-apple gall wasps found in Ohio.  As with the vast majority of plant galls, oak-apple galls cause little harm to the overall health of their oak hosts.  I believe they actually add ornamental value to their oak hosts, but I may be biased.

Gall formation by wasps and other insects is a complex and fascinating process that has yet to be fully understood.  Thus far, no researcher has ever produced a plant gall without the aid of a gall-maker.  Part of the reason the gall-making process is so complex is because gall-making insects and some eriophyid mites (family Eriophyidae) produce chemicals that turn plant genes on and off at just the right time to direct gall growth.  It's why some find insect and mite plant galls so fascinating.

Research has revealed that gall-makers are able to produce chemical replicas of plant hormones (only plants can actually produce "plant hormones") or they produce "hormone analogs" which are molecules that may be nothing like plant hormones but the plant's response is the same as with plant hormones.  The gall forming process is usually initiated by the female when she injects gall-inducing chemicals into the plant along with her eggs.  The eggs themselves may ooze gall-inducing chemicals and once the eggs hatch, the interaction continues with the immature gall-makers continuing to exude chemicals to direct plant growth to suit their needs.

The resulting galls provide both a protective home and nourishment for the next generation of gall-maker.  The immature gall-maker is surrounded by specialized "nutritive tissue" that lines the chamber housing the gall-maker.  The gall-maker feeds on the tissue which is constantly replenished by the host plant.

The chemicals exuded by gall-makers can only act upon meristematic plant cells.  These "undifferentiated" cells are like teenagers; they don't know what they are going to be until they grow up.  For example, some gall-makers exert their influence on the meristematic cells in leaf buds; the precursors to leaf cells.  Under the influence of chemicals exuded by a gall-maker, the meristematic cells that were originally destined to become leaf cells begin marching to a different drummer.  Once the errant leaf cells fall under the chemical spell of a gall-maker, there is no turning back; they will become gall tissue.  This means that gall formation cannot occur once meristematic leaf bud cells are committed to becoming leaf tissue; it's one reason the leaf-gall season begins in the spring!  However, once the galls start growing they will continue to grow even after the leaves fully expand.

Oak-Apples (Back to Our Regularly Scheduled Program)

The exact species of gall-wasp that is responsible for producing an oak-apple gall can be identified based on the gall's structure, size, color, and oak host.  Cutting the gall open will reveal the gall's internal structure.  In general, there are two groups of oak-apple galls:  those with internal tissue composed of a mass of white fibers radiating from the central larval capsule, and those with tissue that strongly resembles the flesh of an apple; it is spongy and juicy.  Beyond the internal structure, oak-apple galls are further identified based on the color of the gall, whether or not the surface of the gall is smooth, dimpled, or covered in bumps, and whether or not the gall has spots.

The so-called Large Empty Oak-Apple Gall is produced by the wasp, Amphibolips quercusinanis (syn. A. inanis).  Galls measures up to 2" in diameter and arise from leaf buds on scarlet and red oaks.  The gall surface is light green and covered with purplish-red bumps.  The internal structure of this gall is composed of white fibers radiating from the central larval structure.  As with all plant galls, oak-apple galls change their appearance once they reach "maturity;" the point where a mature gall-making wasp emerges.  Mature galls produced by this wasp become brittle and turn light brown.  It’s called “empty” because the filaments eventually disintegrate leaving an empty gall husk. 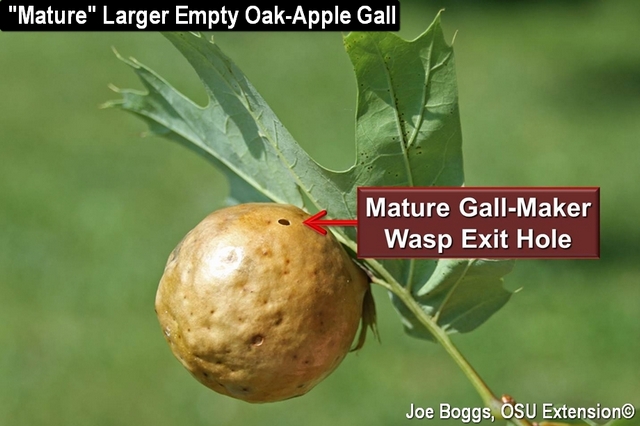 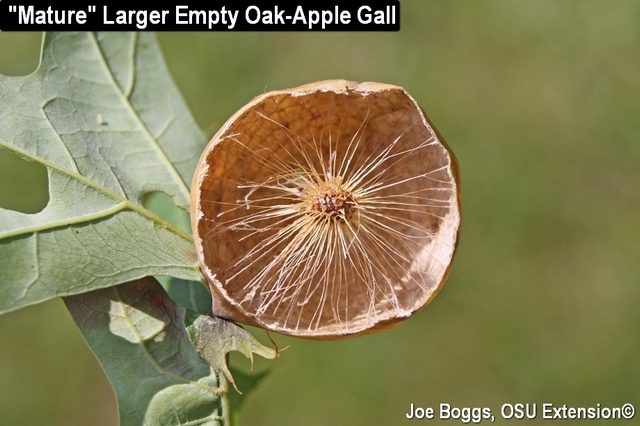 I've included pictures below of another oak-apple gall that I've not yet been able to identify.  It was found on the same tree as the Large Empty Oak-Apple Galls pictured above and it looks very similar.  However, the gall is smaller and arises from the stems of oak flowers.  Gall-makers are so specific relative to the overall appearance and size of their galls as well as the plant parts that are hijacked, such seemingly subtle differences point to a different gall-making wasp species. 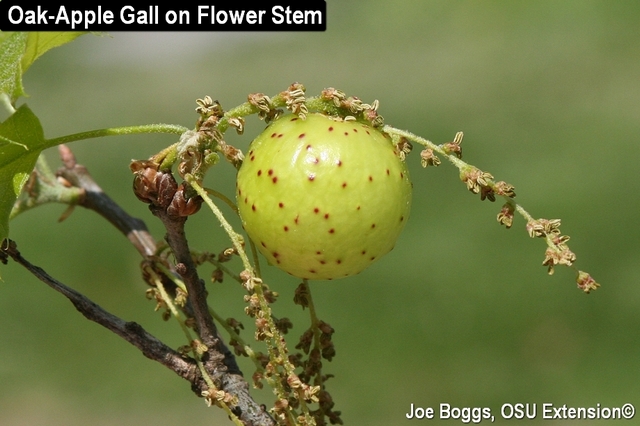 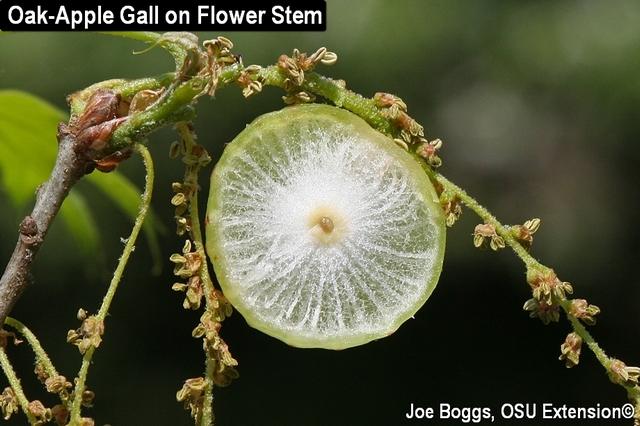 The Small Oak-Apple Gall is produced by the wasp, Cynips clivorum.  This gall forms on the underside of leaf blades as you can see in the images below.  The gall surface is free of any spots or other markings; however, the internal structure is very similar to the Large Empty Oak-Apple Gall. 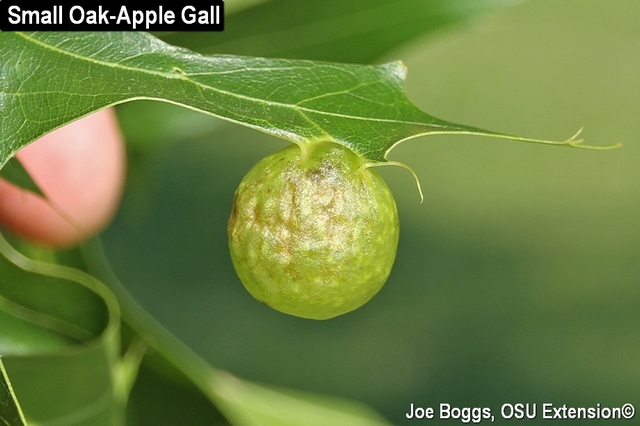 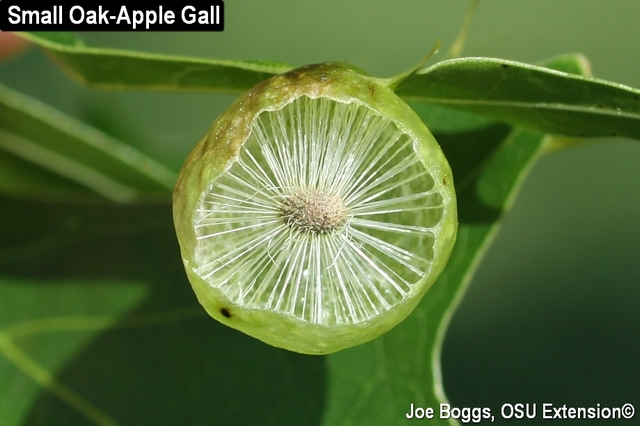 I do not have pictures of the Spongy Oak-Apple Gall that is produced by the gall wasp, Amphibolips confluenta, on scarlet, red, and black oaks.  The galls may be up to 2" in diameter and as their common name implies, the internal tissue is spongy and closely resembles the flesh of an apple.  The surface of the gall is light green, smooth, and free of spots.

For a much more in-depth look at plant galls in general, read the two-part gall series in the April and May, 2016, issues of the Tree Care Industry Association (TCIA) Magazine.  Direct hot-links to the articles appear below under "More Information."