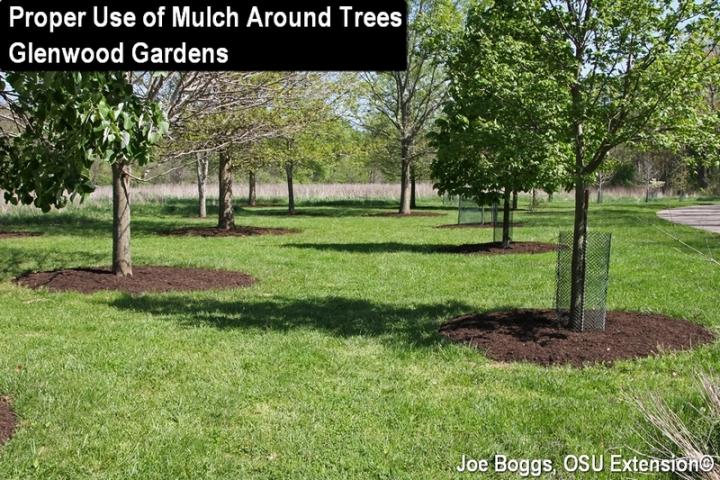 Most of my images are of bad things in landscapes:  plant pests, diseases, nutrient deficiencies, poor planting practices, etc., etc.  I use these teaching images to illustrate plant threats; sometimes those threats are from people.

So-called "volcano mulch" or "mulch mounds" is a good example.  This ill-advised mulching practice involves heaping mulch around the base of trees to create a volcano-like profile.  I seldom take pictures of volcano mulch anymore because I have so many.

That's why I was so thrilled yesterday when I found example after example of absolutely perfect tree mulching at Glenwood Gardens!  The mulch work followed all of the general recommendations for using hardwood mulch around trees.  The mulch rings were as large in diameter as practical and mulch depths were no more than 2 - 3 inches.  Mulch that found its way onto the tree trunks was pulled away from the trunk flare.  I snapped picture after picture to be used in publications and future presentations; the work was that good. 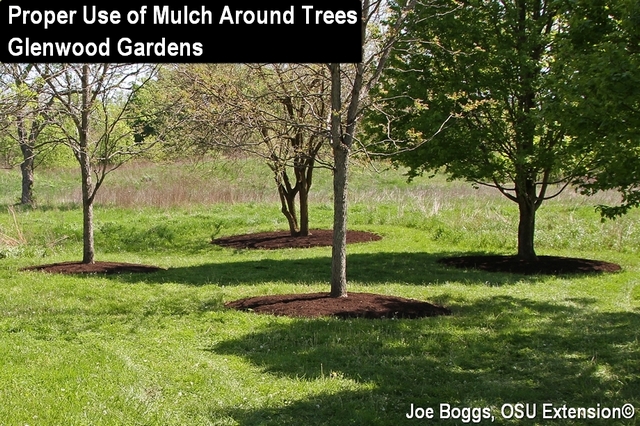 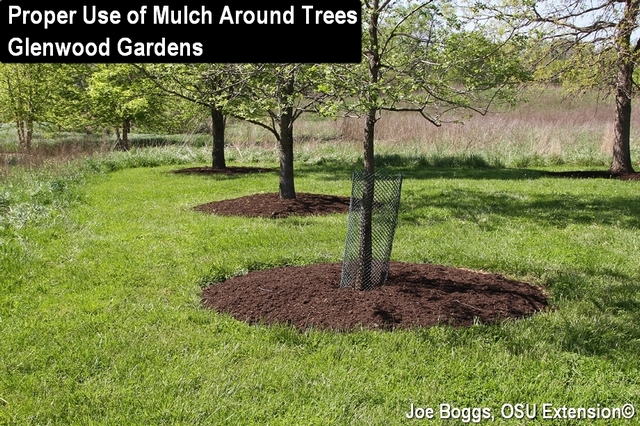 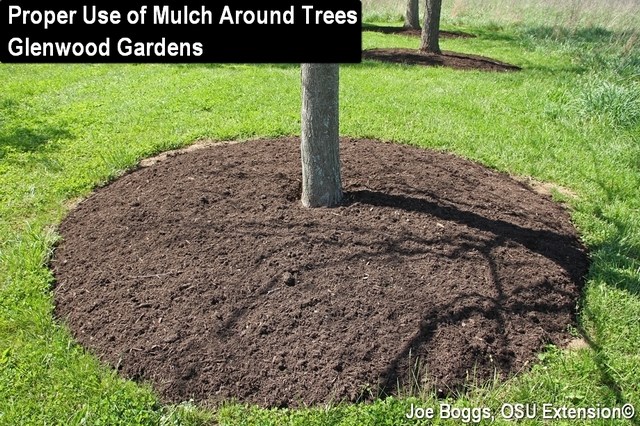 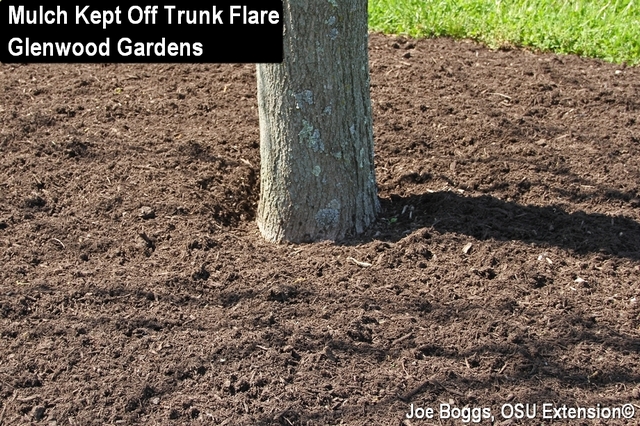 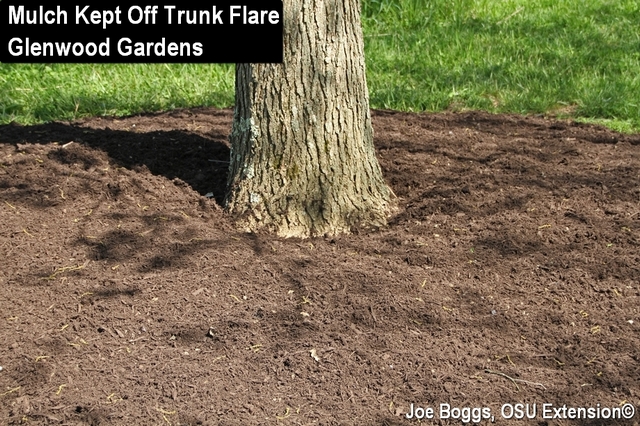 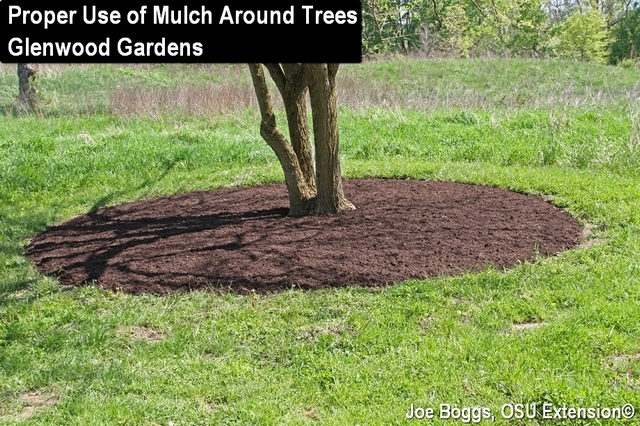 I e-mailed Jerry Frankenhoff, Landscape Manager with Great Parks, to let him know how much I appreciated his leadership in seeing to it that the general mulching recommendations were so visibly followed.  Of course, he took no credit, but instead sent this response:  "The mulching that you noticed at Glenwood Gardens was actually a joint effort utilizing the labor and talent of volunteers from General Electric.  These hard working volunteers from GE worked with staff members from the landscape department and Winton Woods operations to apply about 60 cubic yards of mulch this past Earth Day."

What a fantastic Earth Day statement!  If you know anyone who would benefit from seeing the proper use of hardwood bark mulch around trees, send them to Glenwood Gardens at 10623 Springfield Pike, Woodlawn, 45215.

Volcano mulch does not outright kill trees; if it did, people wouldn't do it.  Instead, it can produce subtle, long-term, ill-effects.  Although the bark mulch may appear light and airy at first, it will ultimately compact as it degrades to interfere with oxygen reaching tree root cells.  The trees respond by growing roots into the mulch which become exposed as the mulch further degrades.  As the mulch decomposes and dries out, it can start repelling water.  You can observe the same effect when you try to moisten a bag of dry peat moss.  This causes infiltrating roots to dehydrate. 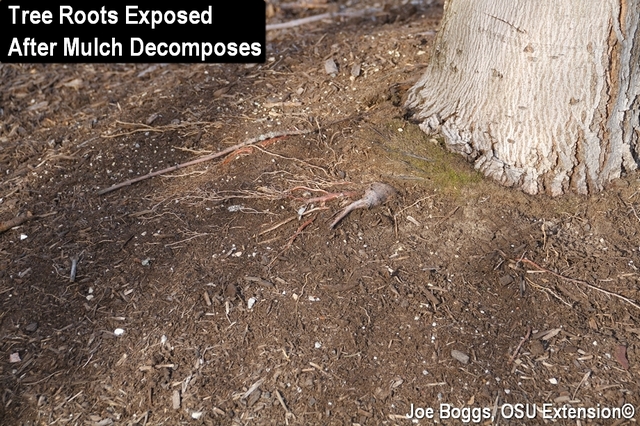 These are just a few of the tree hazards produced by volcano mulching.  Collectively, they can cause serious tree stress opening trees to other issues such as infestations by native tree borers.

William Shakespeare, in King Henry VI, Part III, provided a perfect quote that illustrates what volcano mulching does to trees: 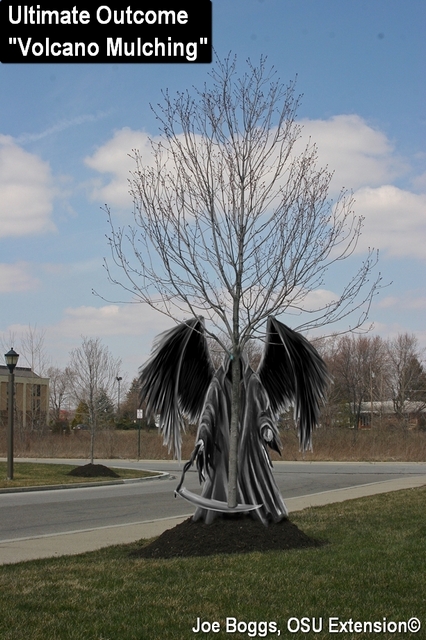 Volcano mulch is a little axe.  But, you won't find it whittling away the trees in Glenwood Gardens.