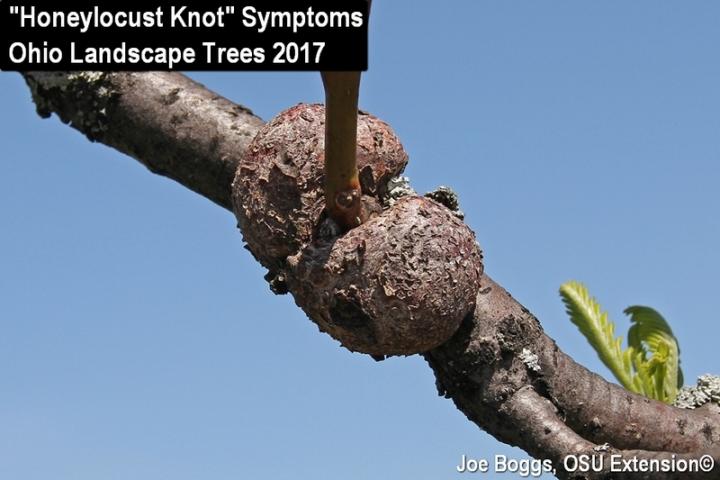 Last week, while photographing calico scale (Eulecanium cerasorum) on honeylocusts (Gleditsia triacanthos) in a commercial landscape (see BYGYL Alert, "Calico Scale is Puffing-Up and Pumping Honeydew," April 19, 2017), I came across two trees with numerous knot-like growths on the stems.  I'm pretty certain the soft scale had nothing to do with growths for two reasons:  the knotty trees were two of the least infested honeylocusts and we've seen these growths before on trees without calico scale.

Strange knot-like or gall-like growths on honeylocust were first reported and investigated back in the early 2000s by Pierluigi (Enrico) Bonello and Maria Bellizzi (OSU Plant Pathology).  The growths were found in a Greater Cincinnati nursery on 'Skyline" and in a nursery in Michigan on 'Shademaster'.  Since that time, the syndrome has been reported on nursery and landscape honeylocusts in Illinois, Iowa, Kentucky, and Maryland.

As you can see in my images taken last week, the growths arise from the nodes at the base of twigs on main branches.  The general appearance of these knot-like growths on honeylocust led to the syndrome being named "honeylocust knot."  Cutting the growths open will reveal the knots are composed of woody material with no sign of a causal agent such as a gall-making insect or mite. 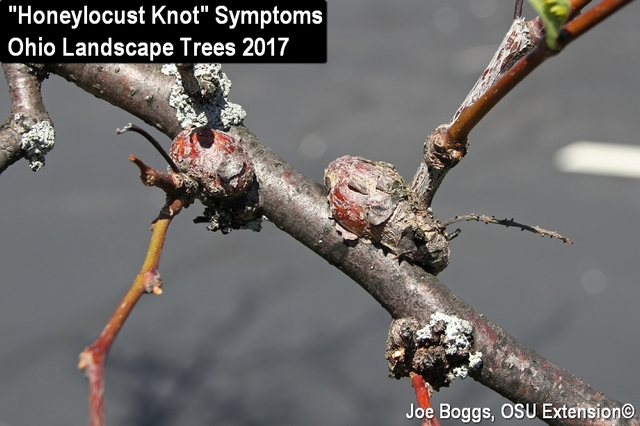 I've also included images taken in 2012 in a Greater Cincinnati nursery showing the stem growths and other symptoms associated with honeylocust knot.  Leaflets on the affected twigs develop a cup-like distortion which may superficially resemble damage caused by honeylocust plant bug (Diaphnocoris chlorionis).  Tips of the twigs often develop shepherd's crooks which may become wilted to resemble bacterial fire blight on rosaceous plants.  Although I have never observed it, others have reported that honeylocust knot may eventually cause premature leaf drop and twig dieback so severe the affected trees die. 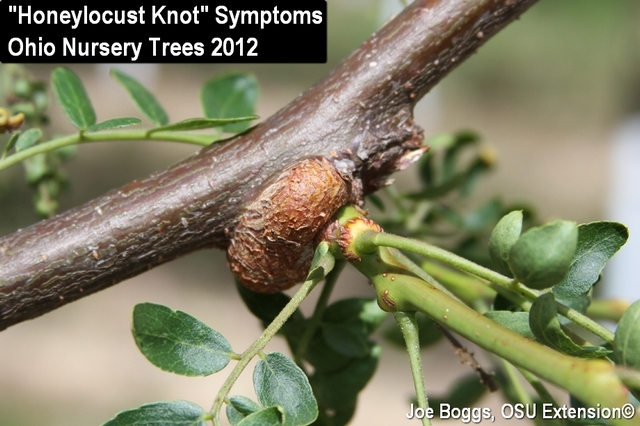 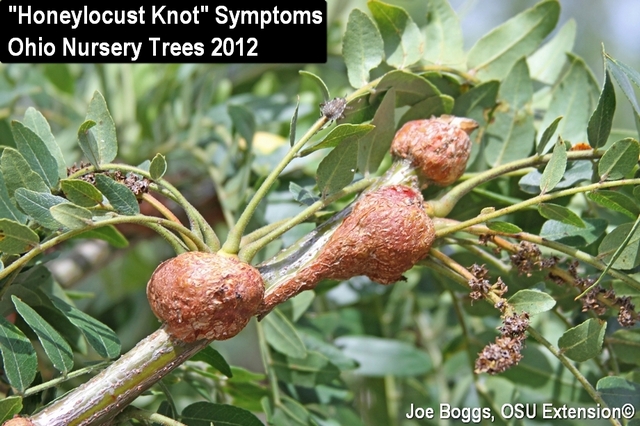 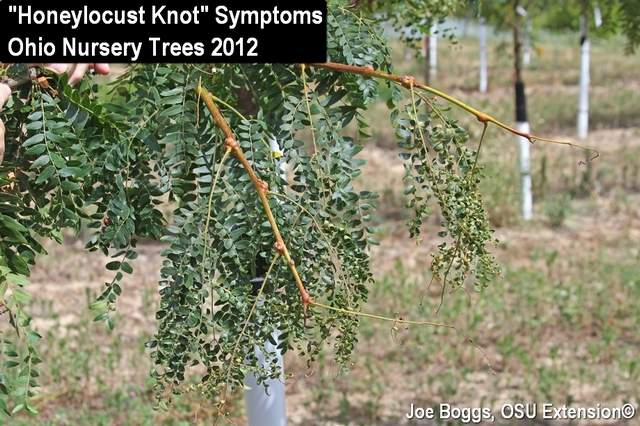 In 2012, a link was made between unusual stem growths on honeylocust and exposure to the turfgrass herbicide Imprelis during the spring of 2011.  It is my understanding that the active ingredient, aminocyclopyrachlor, was isolated from honeylocust stem growths and the makers of the herbicide recognized the knot-like growths as a symptom of Imprelis exposure in litigation settlements.  A number of other symptoms including leaf chlorosis, premature leaf drop, and twig dieback were also associated with Imprelis exposure. 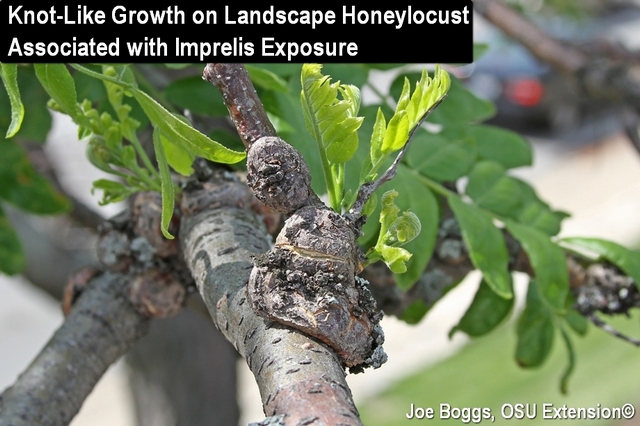 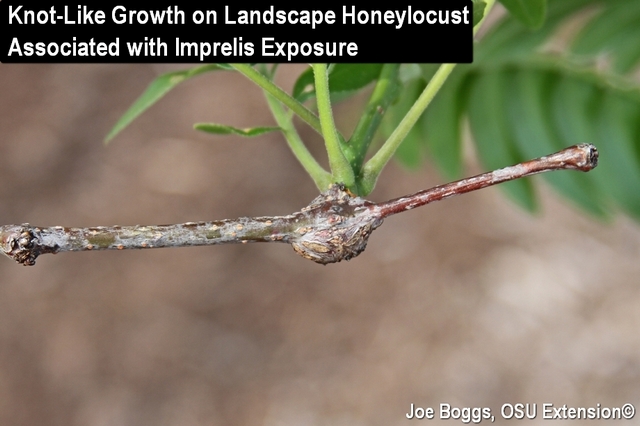 However, readers should not rush to judgment.  Honeylocust knot was obviously observed long before Imprelis made its way to turfgrass management markets in 2011.  Also, the nursery where I took the photos in 2012 was not near an Imprelis application site; not even close.  The same was true of the turfgrass-free tree wells located in a parking lot where I photographed honeylocust knot last week.  In fact, I've been monitoring the parking lot trees for calico scale for the past two years and this is the first time I've observed the growths.

I believe honeylocust knot and the knot-like growths from Imprelis exposure is an example of symptom mimicry with similar symptoms being produced by two different agents.  Of course, the similar symptoms may provide a tantalizing hint at what is really going on that could help guide future investigations.

The OSU researchers pursued several lines of investigation back on the early 2000s, but were never able to conclusively explain the cause of honeylocust knot.  You can access their report by clicking on the hotlink below under "More Information" and turning to page 69 in the publication titled, Ornamental Plants Annual Reports and Research Reviews 2002.

The bottom line is that at this point, honeylocust knot remains a diagnostic mystery.  No one knows what causes the unusual symptoms, so there are not treatments.  Part of the challenge has been the inconsistent nature of the condition from year-to-year and within or across geographical regions.  It just seems to pop-up randomly when and where we least expect it.  However, much more has been learned about various plant physiological conditions and plant pathogens since honeylocust knot was first investigated more than two decades ago.  Perhaps this knew knowledge will eventually help us solve this diagnostic conundrum.