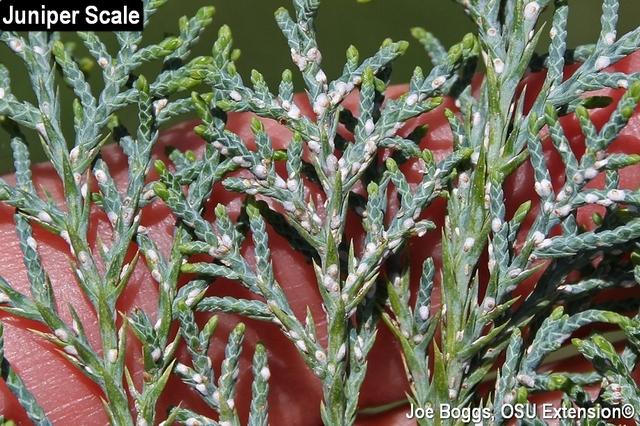 I came across an infestation of Juniper Scale (Carulaspis juniperi, Family Diaspididae) Sunday while doing unconditional pruning (whacking back!) of some wild-haired junipers in the Boggscape.  The discovery provided great samples to share, examine, and discuss with participants in the first 2017 Southwest Ohio BYGLive! Diagnostic Walk-About held yesterday at Spring Grove Cemetery and Arboretum.

Juniper scale is a European native that is now found throughout the U.S.  It will infest and thrive on a wide range of native and non-native junipers (Juniperus spp.) including eastern red cedar (J. virginiana) which almost certainly serves as a reservoir of this scale.  Along with its namesake host, the scale will also infest cypresses (Cupressus spp.) and falsecypress (Chamaecyparis spp.).

As the images demonstrate, the small, circular juniper scale females are found on the underside of needles.  This may hinder detection until host plants begin to show symptoms such as foliage yellowing (chlorosis) and dieback leading to canopy thinning.  Discovery of an infestation may also be hampered by the pattern of infestation which tends to be "bottom-up" and "inside-out" meaning the highest populations densities are typically found on older needles towards the bottom of infested plants. 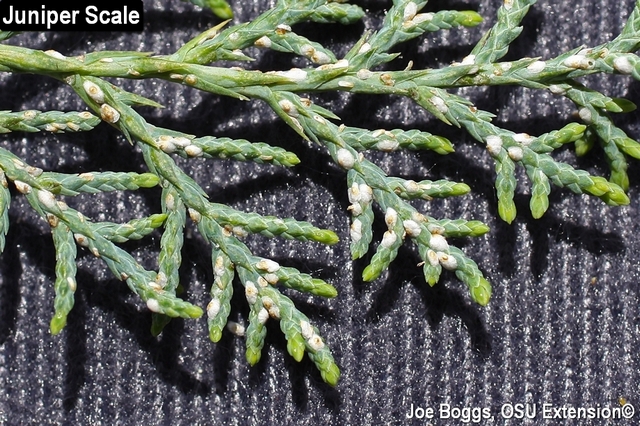 As with all scale insect pests, the overall health of host plants plays a significant role in the impact of a juniper scale infestation.  Healthy plants will be less affected compared to unhealthy plants.  My usually out-of-control junipers are pretty healthy; I only detected the infestation through pruning.  Of course, a heavy infestation will eventually affect the health of host plants possibly leading to a self-feeding spiral producing increasing populations and greater damage.  Still, scale insects are seldom responsible for directly killing their hosts, but their damage makes their hosts more susceptible to other fatal factors. 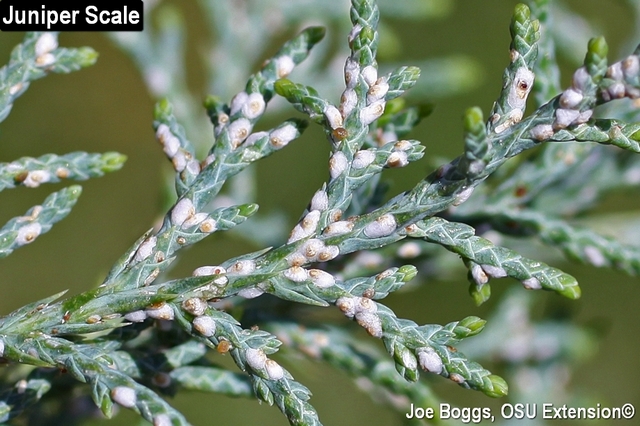 Juniper scale has one generation per season.  Eggs produced by the current crop of females begin hatching when the accumulated Growing Degree Days (GDD) reaches 571.  According to the OSU OARDC Phenological Calendar, the full bloom of Snowmound Nippon Spirea (Spiraea nipponica) and Red Java Weigela (Weigela florida) are good indicators that eggs have started hatching.  However, egg-hatch may occur over an extended period of time.  As with all armored scales, the resulting straw-colored mobile first instar nymphs (crawlers) are the most susceptible stage for insecticidal suppression.

Management options include maintaining good plant health to allow natural bio-allies, such as predators and parasitoids to keep populations below damaging thresholds.  Should juniper scale populations rise above acceptable levels, various university-based online resources indicate that the crawlers are susceptible to topical applications of azadirachtin (e.g. Azitin XL), acephate (e.g. Orthene), and pyrethroids such as bifenthrin (e.g. Talstar).  However, at least two applications may be required to account for the extended egg-hatch.  Crawlers may also be killed with insecticidal soap products which require an even greater number of applications since soap has no residual activity.  Neonicotinoid systemic insecticides (e.g. imidacloprid, dinotefuran) may also kill crawlers that have settled to begin feeding if applied with enough lead-time to reach toxic dosages within the foliage.