Tree of the Week: Ginkgo biloba 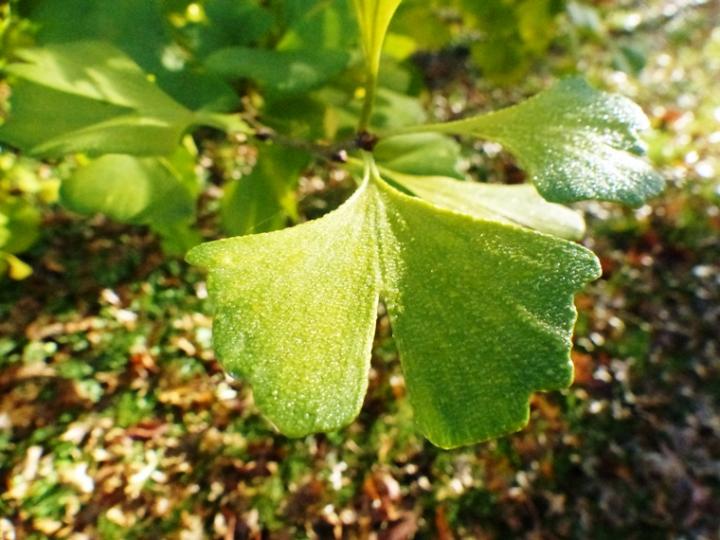 Ginkgo leaves this past week or weekend or this very day are falling, or have fallen, or are still dangling golden earrings on the tree, or yet have a touch of green, or fall with the first snow: All at once, almost quantum-esque, depending upon location, within Ohio, or on one side of the street, or dependent upon the condition of the tree. Don’t believe me: check it out.  It is certainly one thing though: The Tree of the Week. Or is it merely one, or is it two, or both one and/or two?. Read on. 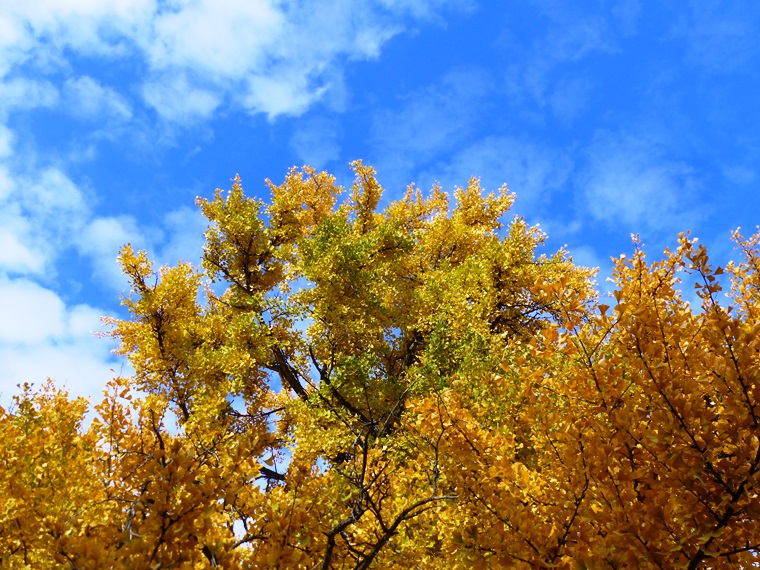 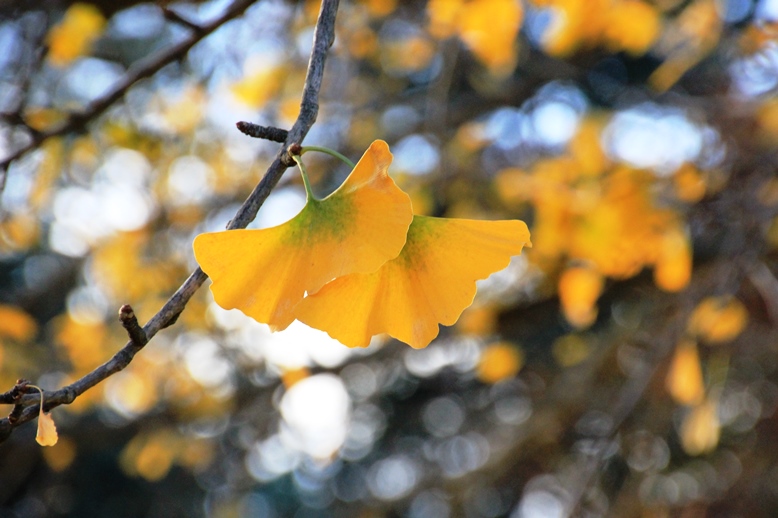 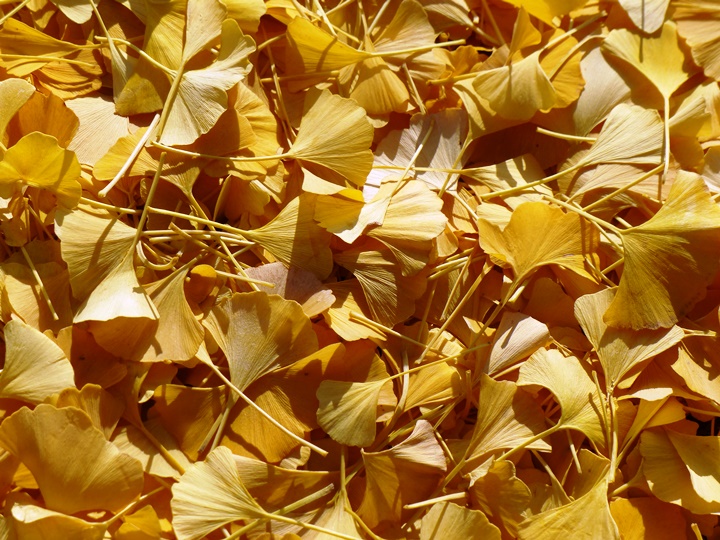 Ginkgo biloba is a fine example of a tree which not only has tremendous value as an Ohio green industry standby, but also is great natural story. The genus Ginkgo is of ancient lineage, originating as now extinct species 250 million years ago or more in the Permian period, long before other Gymnosperms which themselves predated all flowering plants (Angiosperms). Its early relatives were extinct seed ferns and the surviving ginkgo species, Ginkgo biloba, is not closely related to any currently living plants, though alone with cycads ginkgoes produce motile sperm cells and thus have some evolutionary linkage to these cycads.

Ginkgoes are dioecious (“two houses’), in that there are separate male and female plants.  Female ginkgoes (horticulturists sell male clones) have fruitlike reproductive structures (named “golden apricots” or “silver apricots” by some), the fleshy part of which is quite malodorous, in fact vomit-grade malodorous. The seeds inside are prized in Oriental cuisines, though eaten sparingly since they do have toxins which can be dangerous to all, and some individuals are especially sensitive to ginkgo seeds. 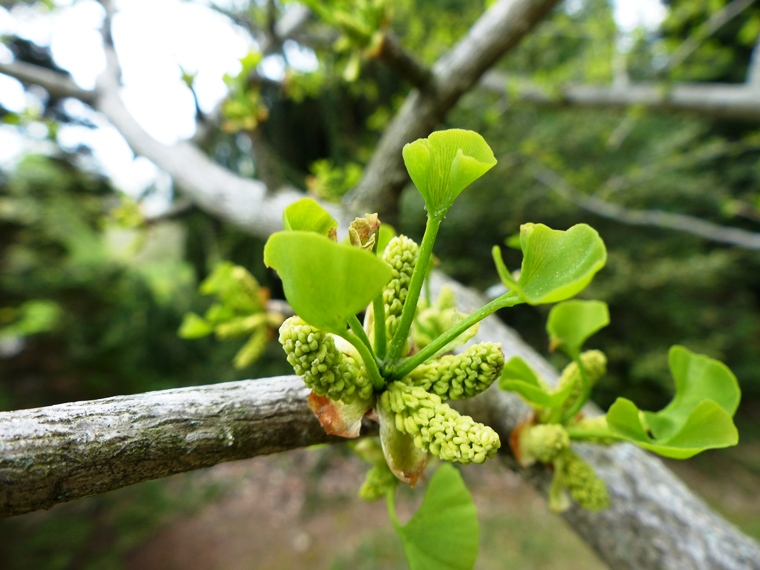 In addition if you decide to view ginkgoes as part of your edible landscape and collect those “silver apricots” for the “nuts” inside, beware. The fleshy part surrounding the inner seed, in addition to the butyric acid that gives the smell, also contain a urushiol-like chemical which, as in poison ivy, will cause your immune system to summon an itchy rash. Wear gloves. 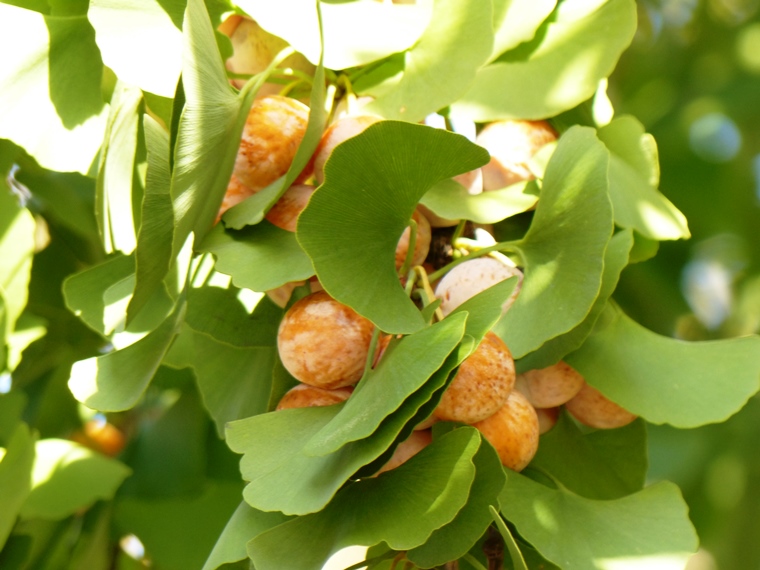 Ginkgoes are also highly valued for medicinal properties, and ginkgo plantations that harvest leaves are used to produce ginkgo products including those touted, with some evidence that they have some effects as memory aids.  At least I think I remember reading this somewhere. Oh yes, the New England Journal of Medicine.

Horticulturally, ginkgoes are quite popular as trees of veneration worldwide, from Buddhist temples to the Morton Arboretum in Chicago, from the Old Lion ginkgo at Kew Botanic Gardens to the street tree ginkgoes outside The Jake where the Indians play in Cleveland (yes, it is now Progressive Field officially, but to me it will always be The Jake).  Ginkgoes are good urban survivors.

Ginkgoes are large trees, growing to 60 or over 100 feet and over 150 feet in remnant native Chinese groves.  There are a number of cultivars these days, from upright ginkgoes, to dwarves such as ‘Troll’ to ‘Variegata’ with lovely cream-white variegation – and ginkgoes can be espaliered; just ask Swarthmore College. Natural streamside survivors, ginkgoes do best with moist, but well-drained acid soils. Ginkgoes have relatively few diseases or pests, and of course, at the end of the season, there is the wonderful sometimes quite spectacular synchronous falling of the lemon-yellow leaves on an October or November day. 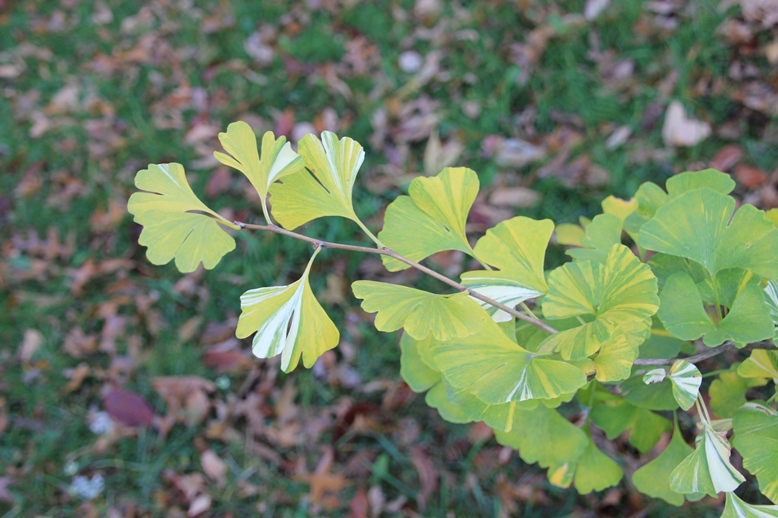 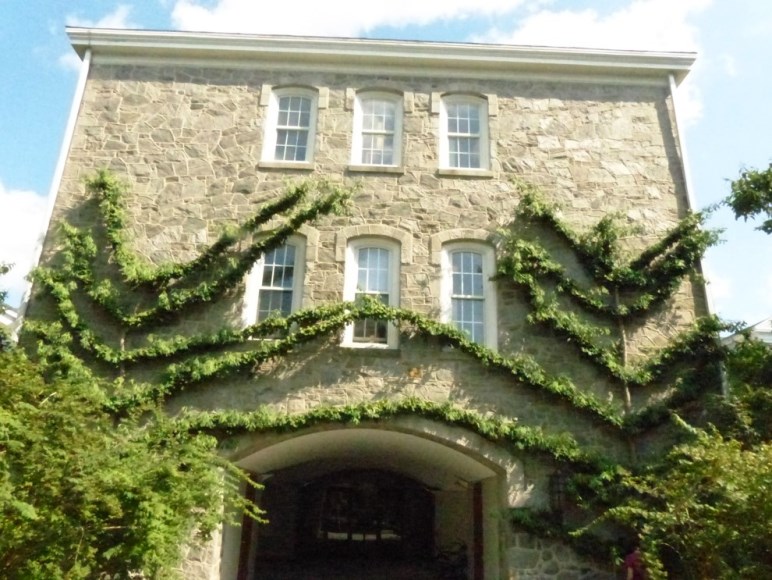 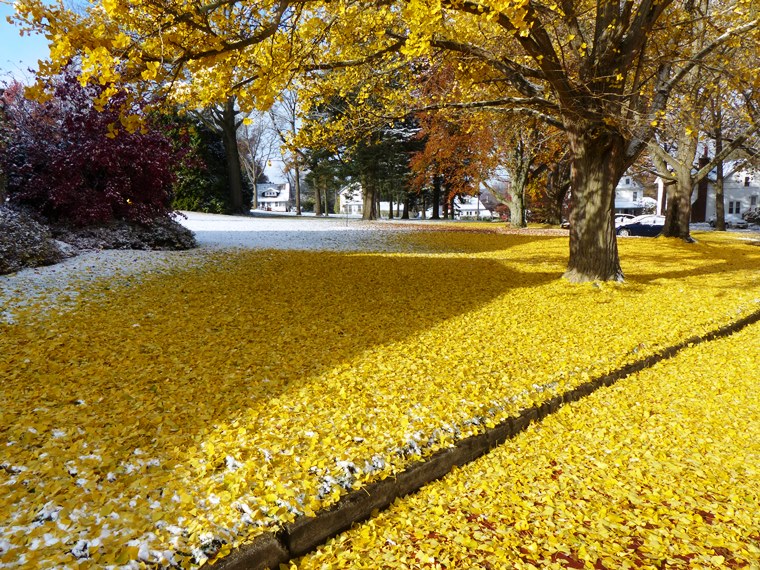 And ginkgoes have quite a literary connection, from a poem of our uneasy mortality by the former U.S. poet laureate Howard Nemerov, to Goethe’s channeling of the bilobal nature of the leaves: Note this poem “Ginkgo biloba” to his beloved:

This leaf from a tree in the East,
Has been given to my garden.
It reveals a certain secret,
Which pleases me and thoughtful people.

Does it represent One living creature
Which has divided itself?
Or are these Two, which have decided,
That they should be as One?

To reply to such a Question,
I found the right answer:
Do you notice in my songs and verses
That I am One and Two? 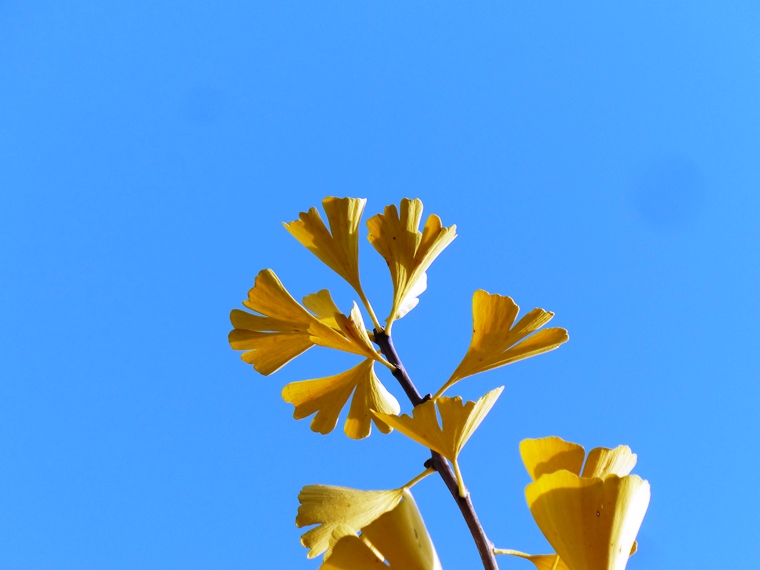