A Good Time to Scout for Calico Scale 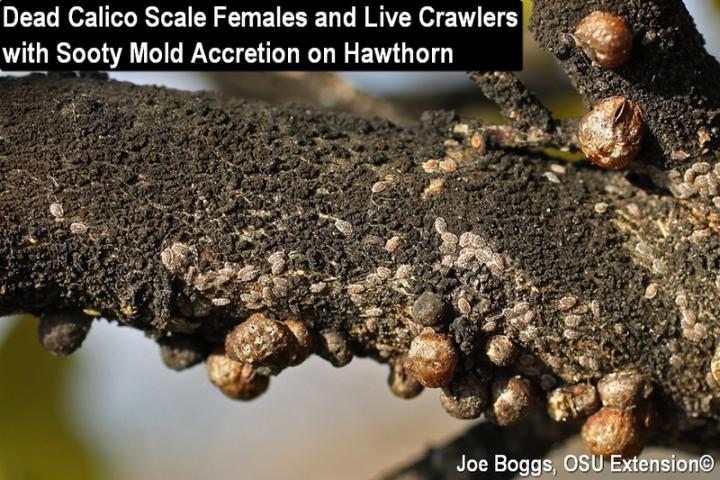 Some of the most productive scouting for insect tree pests occurs once trees lose their leaves in autumn.  If effective pest suppression tactics can't be applied in the fall, detecting insect pests at this time of the year will at least allow you to plan ahead for next season.  Such is the case with the non-native calico scale (Eulecanium cerasorum).  Here's what to look for.

Calico scale is a "soft scale" meaning that female scales are protected by a soft helmet-shaped shell.  This is a relatively large soft scale with mature female shells measuring about 1/4" in diameter. The scale's common name comes from the starkly contrasting calico pattern of black-and-white markings on the shells of live females in late spring to early summer.  Once they produce eggs, the females die and turn orangish-brown, but they don't disappear.  Some may detach from the tree, but at this time of the year, you will still find collections of dead female scales clinging to plant stems.  I know; it sounds horrible.  Pay close attention to water sprouts which are particularly attractive to this scale. 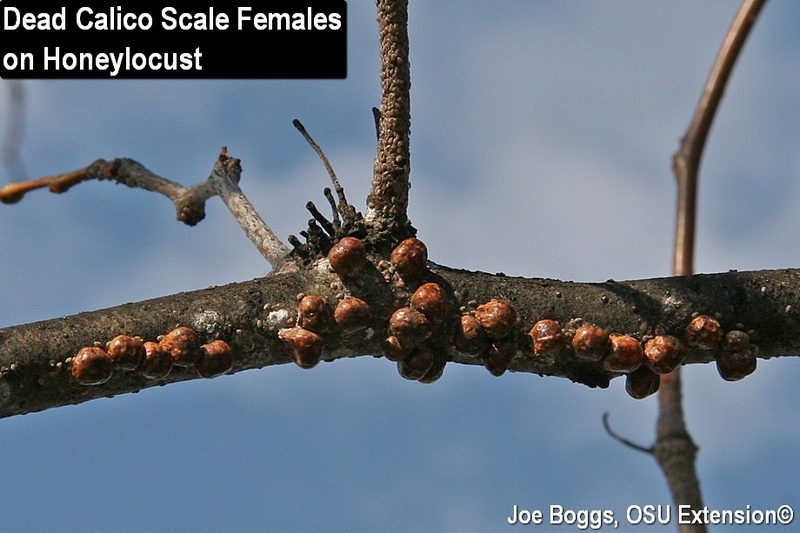 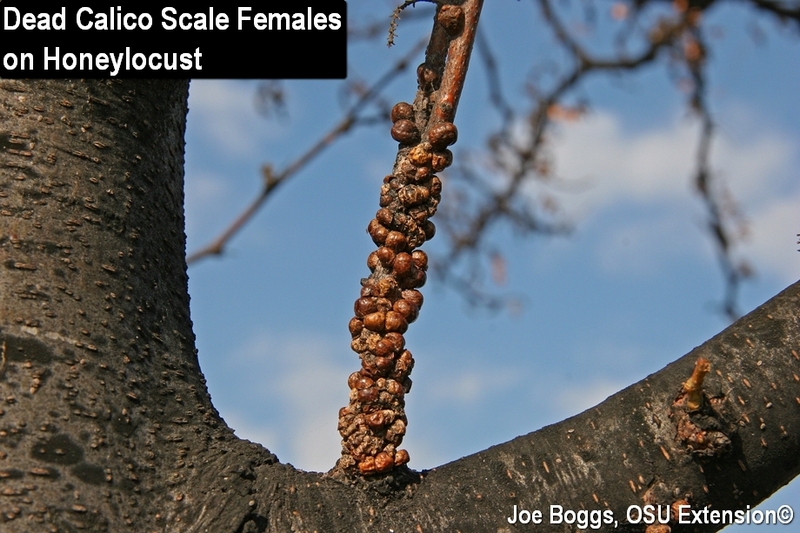 Once the eggs hatch in early summer (748 GDD), the nymphs (crawlers) migrate to the undersides of leaves (see Calico Scale Crawlers on the Move (BYGL Alert, June 7, 2016)).  The crawlers position themselves along leaf veins where they insert their piercing-sucking mouthparts into phloem vessels to feed.  Prior to leaves dropping in autumn, the crawlers migrate back to stems where they will spend the winter.  It's a smart move; they would have a terrible experience if they remained on the shed leaves.  Crawlers are easy to see with the naked eye at this time of the year, particularly if they are surrounded by black sooty mold or clustered on water sprouts; a common location. 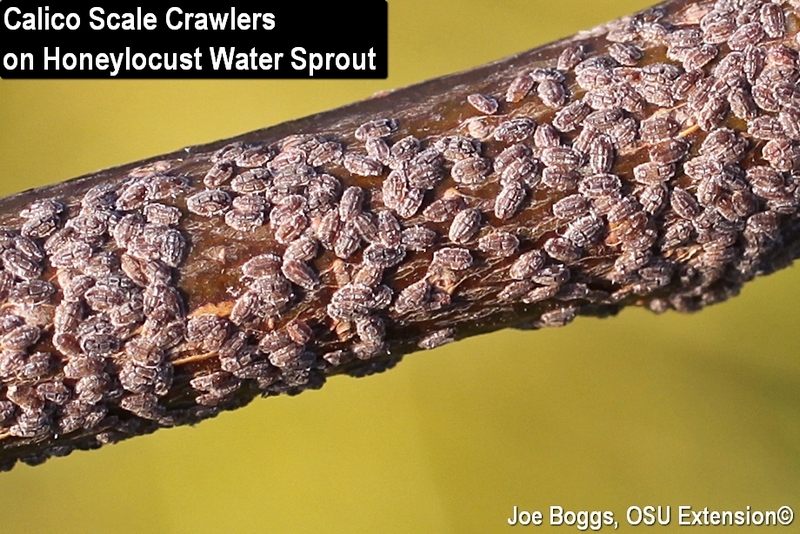 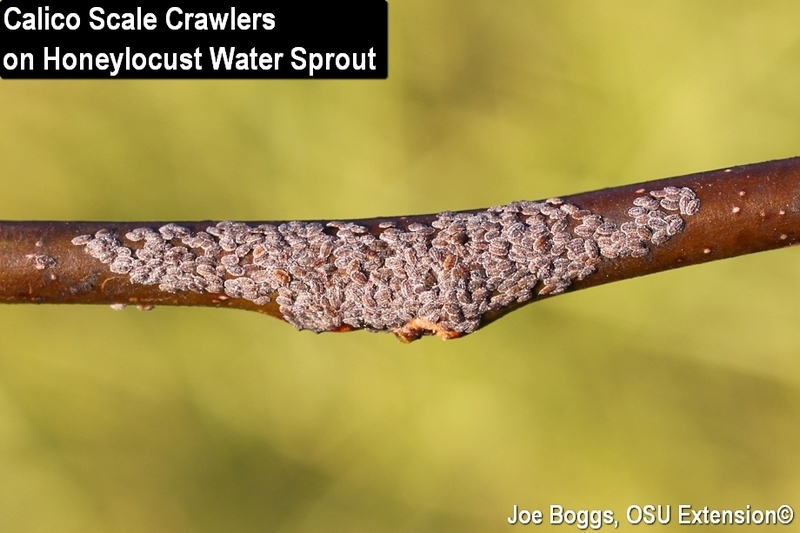 As with all soft scales, calico scale adults and crawlers feed by inserting their piercing-sucking mouthparts into phloem vessels to extract amino acids that are dissolved in the sugary plant sap.  They discharge excess sap from their anus in the form of sticky, sugary "honeydew" that drips onto the leaves, stems, and branches of scale infested trees.  Yes, honeydew is actually a type of insect poo (see Overwintered Calico Scale Females are Puffing Up and Dripping Honeydew (BYGL Alert, April 21, 2016)).

Black sooty molds colonize the honeydew to produce blackened twigs, branches, and tree trunks which is one of the most obvious symptoms of a heavy calico scale infestation.  The blackening becomes very evident this time of the year after trees have shed their leaves allowing sunshine to spotlight the black fungal growth. 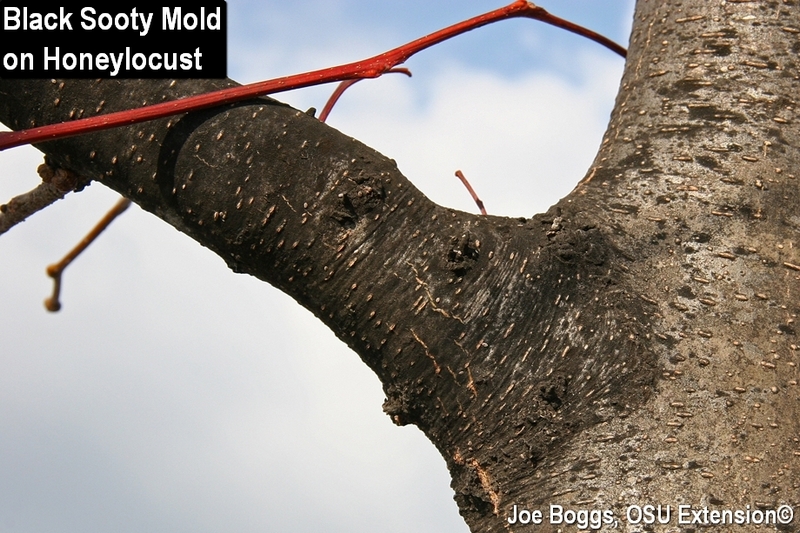 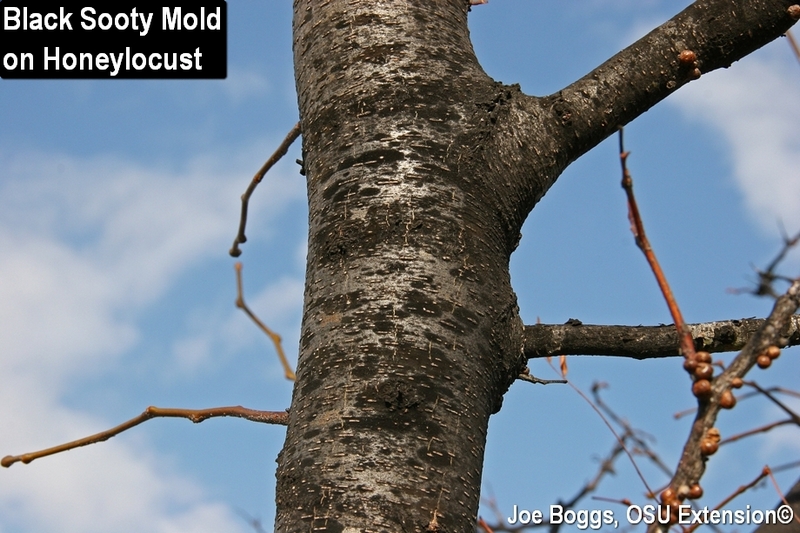 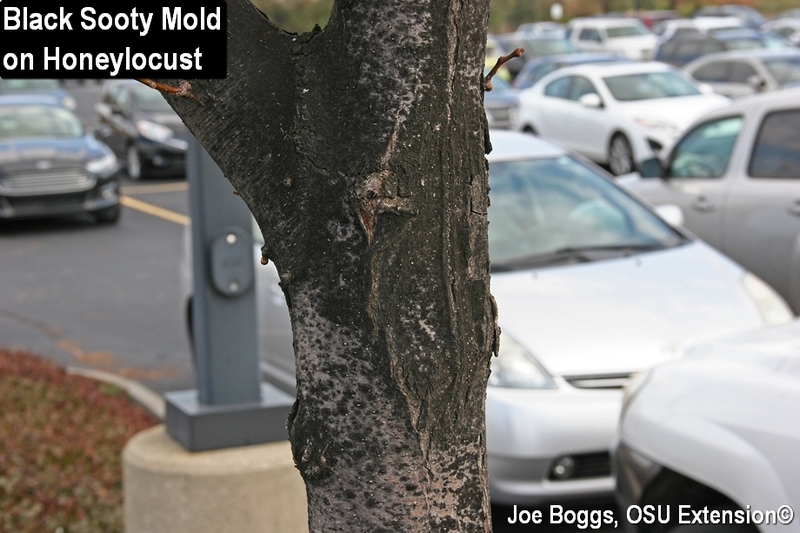 Unfortunately, there are no effective management tactics that can be applied at this time of the year to suppress a calico scale infestation.  However, discovering a calico scale infestation now will give you time to plan a management strategy for next season.  As with most soft scales, calico scale is seldom a direct killer of established landscape trees.  But heavily infested trees may suffer branch dieback and the accumulated stress caused by substantial sap loss coupled with other stress producing conditions may kill trees.  So, the best first step in scale management is to resolve other issues that may affect tree health.

Unlike many other soft scales, calico scale is not controlled with either dormant oil or summer oil applications.  Likewise, systemic insecticides such as imidacloprid (e.g. Merit) are not effective in suppressing damaging populations.  An insecticide efficacy trial conducted in 2014 by Dan Herms (OSU Entomology) in southwest Ohio showed that Onyx (bifenthrin) will provide effective control if the application targets the summer crawlers attached to the underside of leaves.  Applications were made on July 25 in the efficacy trial.