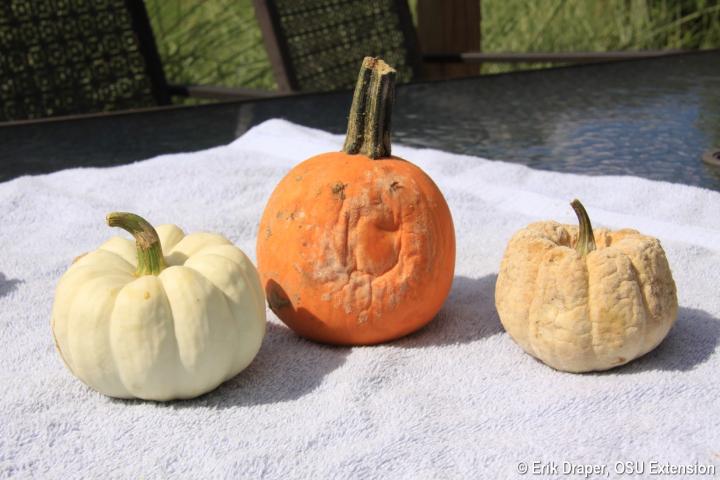 In the past few weeks, I have received multiple questions from farmers growing pumpkins, asking what is going on with the pumpkins!  When pressed about what they were seeing, the response is always a “come out and see for yourself” and so I usually do!  For me, plant problem diagnostics are ALWAYS more accurate and effective when done hands-on, using my own senses and asking those pertinent or impertinent questions to get at the answers!  In these cases of the great pumpkin patch puzzle, they would pick perfectly healthy looking pumpkins, wash the dirt off of rinds and put them into bins.  A couple of days later, when getting ready to load the bins, it was noted that liquid was dripping out of the bins and puddling onto the floor and the liquid really stunk!  When they dug into the bin to see what was going on, a pumpkin had turned into soft, rotted mush!  Any pumpkin that was touching the pumpkin mush or had been dripped on by the liquid stink, had rotted too!

In all of these cases, the first question was “How can they be going bad when I never missed an application and stayed perfectly on schedule with my fungicide sprays?”  My answer always initiated a blank inquisitive stare, which was always instructive to me.  My answer was a simple question of “which fungus were you attempting to control?”  The invariable answer back to me was always “well, all of them, of course!”  I then pointed out the obvious answer and lesson- “Doesn’t look like it worked very well to me…how about you, what do you think?”  Then came the teachable moment when I informed them of the plant pathology mantra “not all fungicides will control all fungi!”

The place to start with this persnickety pumpkin problem is to identify which fungus, fungi, or bacterium or even bacteria were causing the pumpkins to go zombie-like and slough off their rinds.  After examining and checking a lot of putrid pumpkins, I determined the reason was due to two fungi; namely, Pythium rot caused by the pathogen Pythium sp. and Phytophthora fruit rot caused by the pathogen Phytophthora capsici.  When I revealed that it was due to these fungi (not really fungi but water molds) the first thing I heard was “how can that be, I spent thousands of dollars this year on fungicides- are you telling me that they didn’t work?”  I explained that these specific pathogens are Oomycetes or water molds, and they DO NOT RESPOND TO MOST OF THE TYPICAL FUNGICIDES USED IN PUMPKIN PRODUCTION.

I pointed out that these pathogens, Phytophthora and Pythium, both commonly exist in our heavier soils.  I described how these pathogens can move into and infect the rind of the pumpkin fruit; especially, if that fruit is sitting on bare soil and that soil has been wet/moist for an extended period of time, like a couple of weeks.  The grower then tells me I’m crazy and how can that be the reason for the diseases because we have been so dry this year!  I helped him to recall that for the past three weeks, we have had intermittent rain showers, totaling at least one inch of rain each week and we have had extremely heavy dews, which persisted from early evening, through the night and right up until 10-11am during most mornings.  I spelled it out for the grower to think about the underside of that pumpkin sitting on bare soil, which NEVER dried out, not only from the rains but also from the dews running down the sides of the fruit.  This creates the perfect environmental conditions for the fruits to become infected by Pythium and/or Phytophthora.

Therein lies the irony of the whole situation… we were so dry through most of the growing season that most were worried that the fruit wouldn’t even size up at all!  And now that the fruit is sitting out in the fields ready to be harvested, the rains return and the fruit begins to rot!