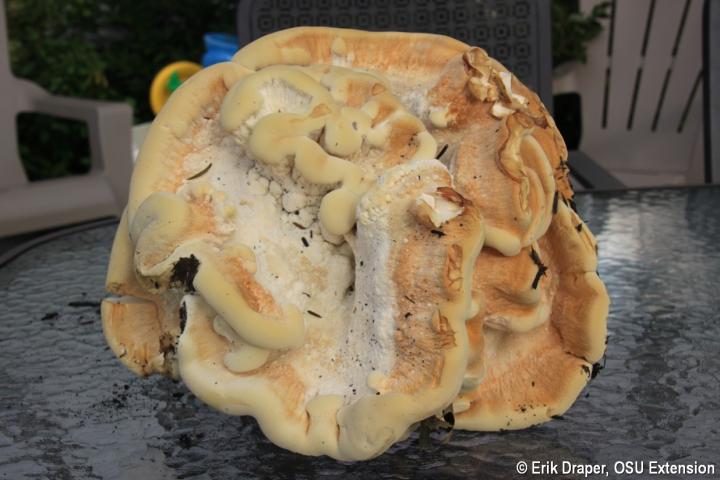 A local arborist called me one day and asked if it was possible that I could identify a mushroom.  Sure, I said I could do that and reminded him that identification is always much easier if a sample was dropped off for me to examine.  Later, as I rehearsed our conversation, I remember hearing him chuckle and then saying, “Well, you’re going to love this one”.   I was thinking through a couple of types and shapes of typical mushrooms when I walked into my office the next morning.  You can imagine my surprise when I spied on my desk, the huge fruiting body of Bondarzewia berkeleyi or more commonly known as Berkeley’s Polypore, which was about 12 inches wide and almost that same height!

Little did I know, during my first introduction to Berkeley’s Polypore, that my specimen was considered a small one because these fruiting bodies can be as large as 39 inches across!!  Regardless, my little beauty at only 12 inches across, really was an awesome sight to behold!  I showed it to everyone who came into the office that day and the next for their educational enlightenment.

Unfortunately, this fungus is both parasitic and saprophytic on hardwoods, especially oaks.  Parasitic because this organism lives off or in another organism; specifically, in this case a red oak and obtains its nourishment from the living tree, while offering no benefit in return.  Saprophytic because this fungus also derives its nourishment from the breakdown and decay products of organic materials, like wood.

This fungus causes a white, stringy, butt rot of deciduous hardwoods and is often found growing alone or gregariously at the base of trees, just like the sample I received.  The fruiting bodies may be produced in both summer and fall.  The Berkeley’s Polypore fungus causes butt rot in the living host tree's heartwood and/or around decaying stumps or from buried roots it is most widely distributed east of the Rocky Mountains.

This group of Basidiomycota fungi, known as “polypores”, are usually identified by their uniquely-shaped fruiting bodies, which contain many pores or tubes on the underside of the mushroom.  Typically, these fruiting bodies have a hard exterior, usually consisting of a tiered, "non-mushroom" shape, and they are most often found on wood, because after all, they are wood decomposers too.