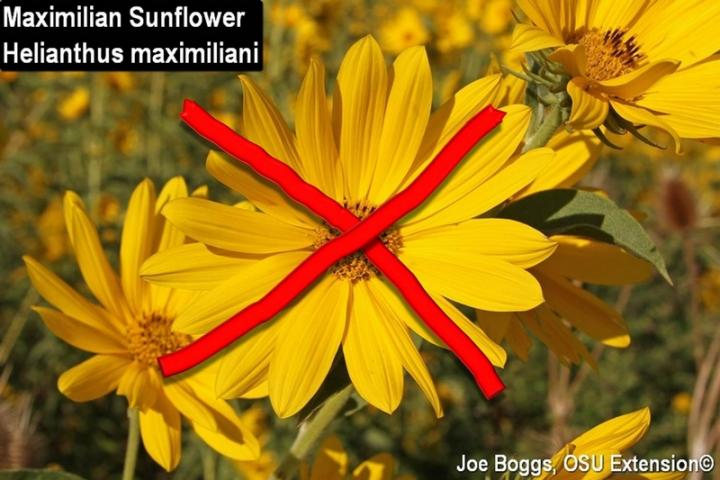 I noted that one of the downsides of the plant is that it "may squeeze out other prairie plants," but this was only after declaring that it "has become one of my top favorite plants for naturalized areas."  Perhaps I was blinded by the sun … flower.

Concerns regarding the downsides of this plant may go far beyond Susan Albert's quote, “One person's weed is another person's wildflower.”  John Blakeman with the Ohio Prairie Association provided some thoughtful insights into this "native" plant along with helpful recommendations.

He noted that while Maximilian Sunflower is native to the U.S., it's not native to Ohio.  It behaves as a mild mannered Dr. Jekyll in the dry regions of the U.S. where it is native.  However, the abundant (mostly) rainfall in Ohio can turn it into an evil Mr. Hyde causing it to dominate prairie plantings.  John also reported that plants are highly allelopathic so they don't fight fair in suppressing surrounding plants.

For these reasons, he noted that Ohio prairie biologists are not in favor of planting this species in Ohio.  John recommended using some better behaving sunflowers including:  Sawtooth Sunflower (H. grosseserratus); Giant Sunflower (H. giganteus); or the lower growing Downy or Ashy Sunflower (H. mollis).

I may be overreacting with downgrading Maximilian Sunflower from "Perennial of the Week" to "Weed of the Week."  However, the potential domineering nature of this native non-native species of sunflower in Ohio highlights the need to consider the ecological parameters where the plant evolved when moving the plant to a new geographical location but continuing to bestow the lofty "native" status on the plant.  Otherwise, it may behave just like any other sinister non-native; which it is.

Regarding my complete reversal in supporting the Maximilian Sunflower:  "Those are my principles, and if you don't like them ... well, I have others."  -- Groucho Marx