Perennial of the Week: Ironweed

Here at the Medina Extension Office, we have Ironweed (Vernonia spp.) planted among other native and annual flowers outside.  And every year people visit our office just to ask, "What is that giant purple flower!?"  Its purple flowers are quite an eye catcher and, despite having "weed" in its name, ironweed's late blooms in summer to fall and brilliant color make it an attractive native wildflower for many gardeners. 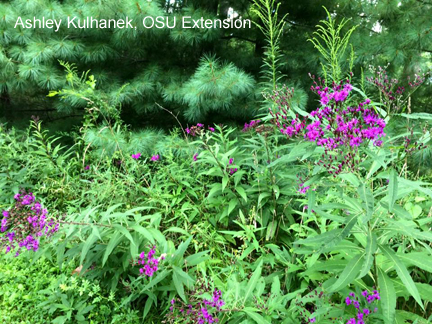 Ironweed is a perennial wildflower in the family Asteraceae.  It is a tall upright plant that can grow 3 to 8 feet tall.  Their stem is described as light green to "purplish-green" and can be smooth to fuzzy.  It has alternately arranged leaves that are long and narrow, dark green in color have serate to smooth leaf edges.  As you see there can be a lot of variation within the group.  But it is the flower that wins favor.  The wide, flat panicle of flowers consists of 10 to 30 small "fluffy" florets.  These loosely clustered composite flowers can span 6 to 16 inches across!  It blooms July through September.  The color can range from pinkish purple to dark magenta to deep purple.  The flowers last 1 to 1.5 months and are attractive to pollinators and beneficial predators. 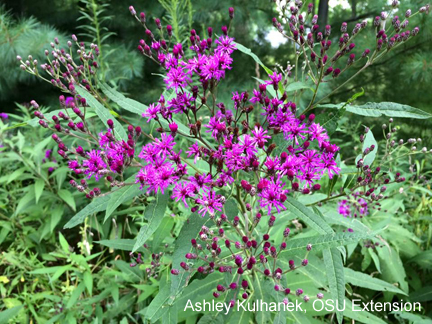 There are many species of ironweeds (Vernonia spp.) that are found in the wild.  Each species itself is highly variable and they can hybridize, so there is great potential for variation in floret number, color shade, and leaf shape and variation in identification too!  For example, Vernonia noveboracensis is called New York Ironweed and Common Ironweed in the literature.  Common Ironweed can be as above or V. fasciculate, which itself can also be called "western ironweed," which is native to Ohio.  So pay close attention when purchasing to see what you are really getting.  In the end, it's all ironweed to me!

Ironweed prefers full sun to light shade and moist conditions.  It is suitable for wetter sites along banks or in a rain garden.  It is considered easy to grow, evidenced perhaps by its weedy nomenclature.  It can be found naturally along woodland borders, thickets, paths, swamps, prairies, pastures, and fields.  It is considered a weed in grazing pastures and is often controlled.  Ironweed has bitter foliage so it is also somewhat wildlife-resistant (but is also why it is a problem in pastures for cows and horses).

Ironweed provides nectar to many favorite pollinators such as long-tongued bees, flies, skippers and various other butterflies including Monarchs, swallowtails, and Great Spangled Frritillaries.  Caterpillars of many moth species feed on Vernonia species (ironweeds) including Pyralid Moths, Eupatorium Borer Moth, and others.  A Michigan State factsheet also notes it is an attractive plant for natural enemies, notably soldier beetles, in the late season with 3 times more natural enemies than the grass control plot (see link below).