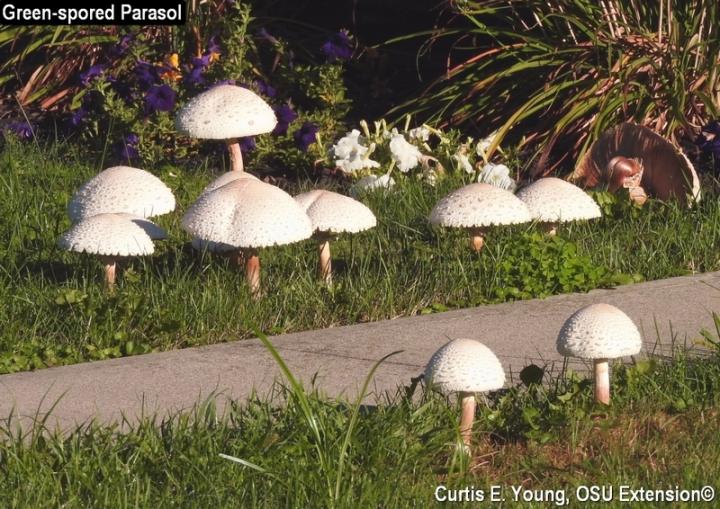 Identification of some of these mushrooms is easier than others.  For example, it is expected that ringless honey mushrooms (Armillaria tabescens) will soon be popping up in many landscapes across Ohio.  These mushrooms are wood decomposing fungi and are associated with dead and dying trees, stumps and buried roots of standing trees and trees that were removed years in the past.  Ringless honey mushrooms grow in clusters where multiple mushroom stalks emerge from a common central growing point.  They typically are tan to brown in color, have gills attached to and sometimes extending down part of the stalk, produce white spores, and lack an annulus ring around the stalk.  The honey mushrooms are said to be edible in many field guides, but others have reported prolonged gastrointestinal distress after consuming them.  The operative words for eating this one would be, approach with caution, be certain of your identification, and sample very small quantities at first until you know how your body will respond to this mushroom.

The decision to eat or not to eat other species of mushrooms that pop up in and around Ohio landscapes is much easier to make…DON'T EAT THEM!!  Curtis Young has discovered two of them in NW Ohio over the past couple of weeks.  These two mushrooms are the green-spored parasol or lepiota (Chlorophyllum molybdites) and the death angel or destroying angel amanita (Amanita bisporigera).

The green-spored parasol is a large mushroom some of them standing up to 14" tall with caps 10-12" in diameter.  The cap starts out more or less round (ball-like) and is 2-4" in diameter, eventually expanding until it is nearly flat.  The cap is dry and white, and has brownish patches that develop into scales, especially near the center of the cap.  The flesh inside the cap is thick and white.  The gills are initially white, becoming greenish to greenish gray as the mushroom matures.  The gills are initially covered by a white, membranous partial veil that usually persists as a ring of tissue around the upper stalk and may be moveable.  Its stalk is smooth and white, 3-14" in height and about 1/2-1" in diameter, sometimes slightly thickened toward the bottom end and no volva.  Its spore print is green to grayish-green.

They look like they would make a fantastic "portabella" sandwich.  However, if one eats these green-spored parasol mushrooms, they will be green around the gills just like the mushrooms.  Green-spored parasols can be mistaken for another mushroom that frequently emerges at the same time, the meadow mushroom (Agaricus campestris).  Meadow mushrooms can also be large in size, but their gills start out pink and turn a dark brown as spore production occurs.

Symptoms of green-spored parasol poisoning are mostly gastrointestinal in nature.  A quote from a mushroom web page composed by Tom Volk of the University of Wisconsin-La Crosse describes the potential of this mushroom.  "According to Dennis Benjamin (Mushrooms: poisonings and panaceas, 1995, W.H. Freeman and Company, 422 pp.) 'In some individuals the gastrointestinal syndrome, which occurs about 1 - 3 hours after the meal, can be very severe, especially the colicky abdominal pain, which can mimic that of a 'surgical' abdomen.  Symptoms persist for up to six hours, and even longer in a few patients.  Nausea, vomiting and diarrhea complete the picture.  The diarrhea can be explosive in nature and become bloody.'  You probably won't die from eating this mushroom (although there is one recorded fatality involving a child), but it's certainly not a pleasant dining experience - So be very careful if you plan on eating any Lepiota species.  Projectile diarrhea would not be very much fun."

Destroying angels are much, much worse than the green-spored parasols.  The unfortunate sole who consumes destroying angel mushrooms frequently does not survive the poisoning to learn from the experience.  The destroying angel is stark white in color.  It usually is several inches tall and possesses a prominent sack (volva) around the base of the stalk.  Its cap starts out bell-shaped, but flattens out with age.  Some caps become convex in shape with the outer edges curling upwards.  Its gills are free or nearly free from the stalk.  Its stalk has a persistent, thin, high, skirt-like ring near the cap and a white, sack-like volva encasing the base, which may be underground or broken up.  They can grow singularly or in scattered groups.

At the following link is quite an interesting story of surviving (barely) a destroying angel mushroom poisoning of a bold (careless) mushroom hunter: https://blog.mycology.cornell.edu/2006/11/22/i-survived-the-destroying-angel/