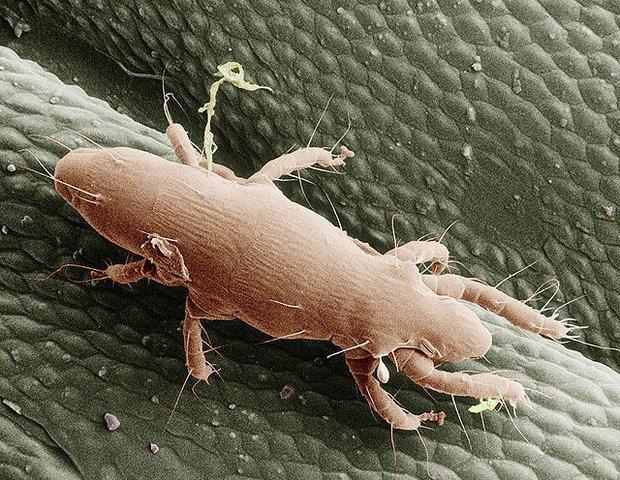 Folks in Northeastern Ohio complain of itchy welts on their heads, neck and upper torso. The oak itch mite, Pyemotes herfsi, has been identified as the culprit.

The last time Ohio suffered an outbreak was in 2008 in the Cincinnati area. At that time, walkers, joggers and cyclists were complaining that when they followed trails that were overhung by oak trees, they would end up with itchy welts the following day. At that time, the oak itch mite had been recorded as being a periodic pest from Nebraska to Texas and eastward to Tennessee. The bites were most common in July and August, but the following summer, there were no complaints!

This mite has an interesting history. It appears to be a species native to Europe and it was first detected in the Kansas City area in 1994 when 19,000 people were reported as having bites. Since that time, this mite has been associated with a small leaf margin-folding midge. This midge only attacks pin and red oaks, hence the name oak itch mite. The midge and mites have periodic outbreaks and these outbreaks often do not persist from year to year. Upon reading about this mite in the European literature, it the mites are known to feed on a much wider range of insects. What struck my eye was a report that the mite was found feeding on cicada eggs!

The life cycle of this mite is also strange! In general, the female mites feed by piercing the exoskeleton of an insect such as midge larvae. They then inject a paralyzing chemical that keeps the host insect from moving. The attached mite then begins to feed on the insect blood, and quickly the abdomen expands to many times the size of the original mite. Within this sac, eggs hatch and the immature mites complete their entire development within the brood sac! Soon, fully developed adult mites begin to emerge from the abdomen. Males come out first so that they can mate with the females that follow. The new females then seek out more insects to attack. Each successful female can produce up to 250 offspring. There are reports that a single midge "gall" can produce thousands of new mites. When the mites run out of insect food, they drop out of the galls and drop in the hopes of being picked up by the wind to be blown to additional sites. Unfortunately, if the mites drop onto human skin, they will try to pierce the skin as if it was the exoskeleton of an insect. Their saliva can liquefy tissues and most people have a severe allergic reaction to this. The result is often an itchy red welt with a small pimple in the middle.

The reports of this mite in northeastern Ohio started about the time that periodical cicada eggs were hatching (last week of July into the second week of August). If this mite was using the cicada eggs as food, that food resource is gone and the mites are dispersing as normal. This would also help explain why folks are experiencing bites when they haven't been under oak trees.

There are no published reports of insecticides or miticides that have been tested to control the midge or oak itch mites, so we have no evidence that sprays would control this mite. In this case, if the mites are feeding on the periodical cicada eggs, that event is over for another 17 years. There is also little evidence that normal insect repellents are effective at preventing mite bites. I recommend that folks who are out and about where this mite might be present, they should put their clothing into a clothes dryer after coming in (about 15 minutes on medium to high heat), and quickly proceed to take a shower while liberally using soap. This may not prevent all bites, but it should reduce the incidence.

Revision on August 31: After this article went out, I've heard from folks in the southeastern part of Ohio that they are also suffering the effects of the oak itch mite, so activity is much wider than originally stated!  Apparently, there is also a good "crop" of new larval ticks (commonly called seed tick) which are also being picked up and some are thinking that these larval ticks are producing the itchy welts!  Not so!!

The biggest question now is, "When will this stop?"  If past experience is correct, these mites continue with their activity for a 4-6 week period and they definitely will stop after the first frost event. If these mites built up because of the periodical cicada eggs, we are nearing the 4th week after cicada egg hatch. Therefore, the bites should taper off pretty soon!