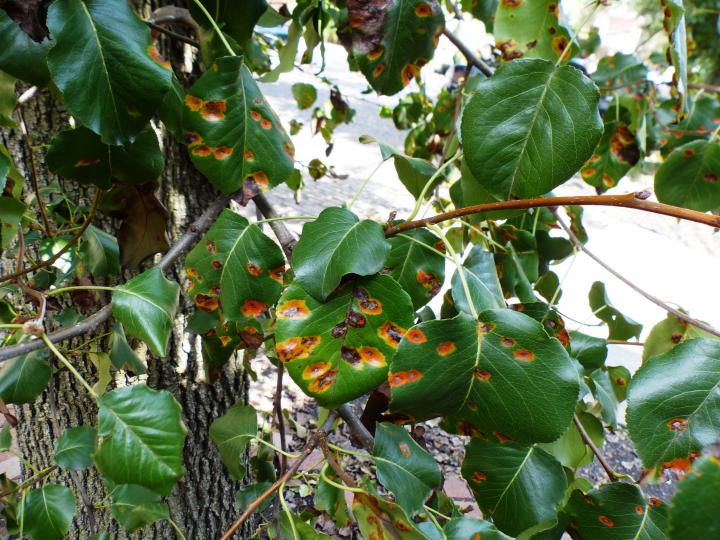 While walking in German Village in Columbus with ONLA’s Frits Risor last week we revisited the Callery pears with rust disease noted earlier this season (http://bygl.osu.edu/node/342). I wanted to see if the rust was isolated to the two trees heavily affected in June. As earlier, the two trees in question were speckled with bright orange lesions on the upper leaf surfaces, but I suspected that by now the rust fungus would have undergone sexual reproduction in the leaves with aecial spore pustules developing  on the lower leaf surfaces as would be seen with the cedar-apple rust fungus (Gymnosporangium juniper-virginianae) or cedar-hawthorn rust fungus (G. globosum). Not so. 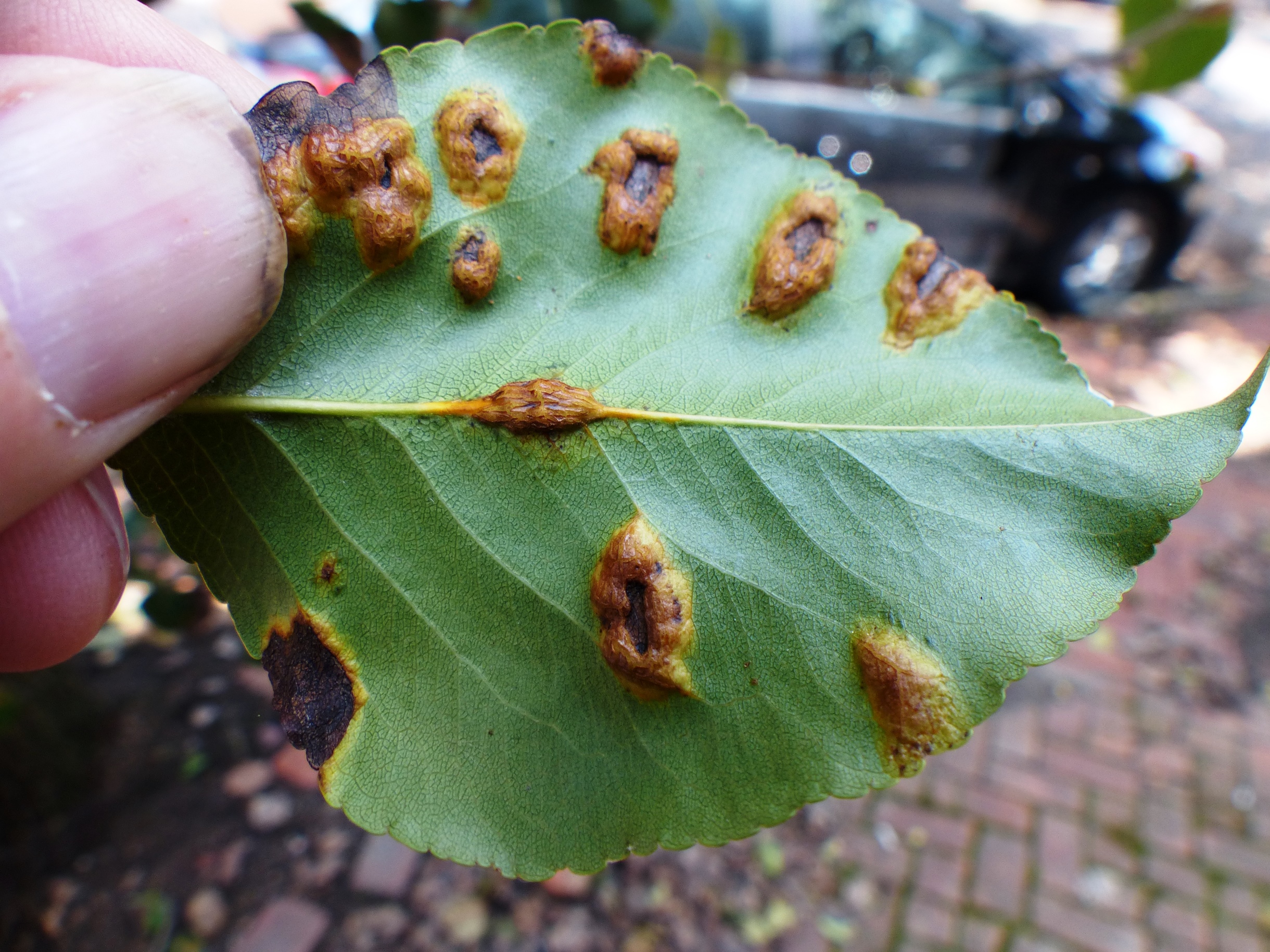 Then earlier this week, between talks at the Indiana Professional Lawn and Landscape Association program in Danville, Indiana I asked Purdue’s super diagnostician Gail Ruhl if she had ever seen rust disease on Callery pear in their lab. She had - once, last year, and here are a few notes from a paper they published in the American Phytopathological Society Journal Plant Disease:

“Rust-infected specimens of Bradford pear were collected from a nursery at Elkhart, IN, in July 2015 and submitted to the Purdue Plant and Pest Diagnostic Laboratory, a member of the National Plant Diagnostic Network, for diagnosis. Only a few trees showed rust symptoms… To our knowledge, this is the first report of G. clavipes on the genus Pyrus in Indiana and the first published report of the rust infecting P. calleryana in the United States. Moreover, P. calleryana is reported here as a new host (Matrix nova) for G. clavipes.”

Interesting.  I had not considered that the pears in Columbus were infected with Gymnosporangium clavipes, the cedar-quince rust fungus, which typically infects crabapples and hawthorn fruits and stems, rather than leaves. I thought in June that I was seeing the European pear trellis rust fungus (Gymnosporangium sabine), which had been reported in Ontario. Obviously, more sleuthing (and lab work) is needed here in Ohio.

Is whatever rust disease we are seeing on Callery pear here something we will see more of? Hard to say, even if less Callery pears are planted due to concerns over their invasiveness. Regardless of that, there are still millions upon millions of Callery pears, the ‘Bradford’ cultivar and many others, in landscapes and elsewhere. As Frits and I walked down 4th Street in German Village, we noticed that although none were as affected by rust as the two spectacularly infected trees, virtually all of the Callery pears there had some rust lesions. 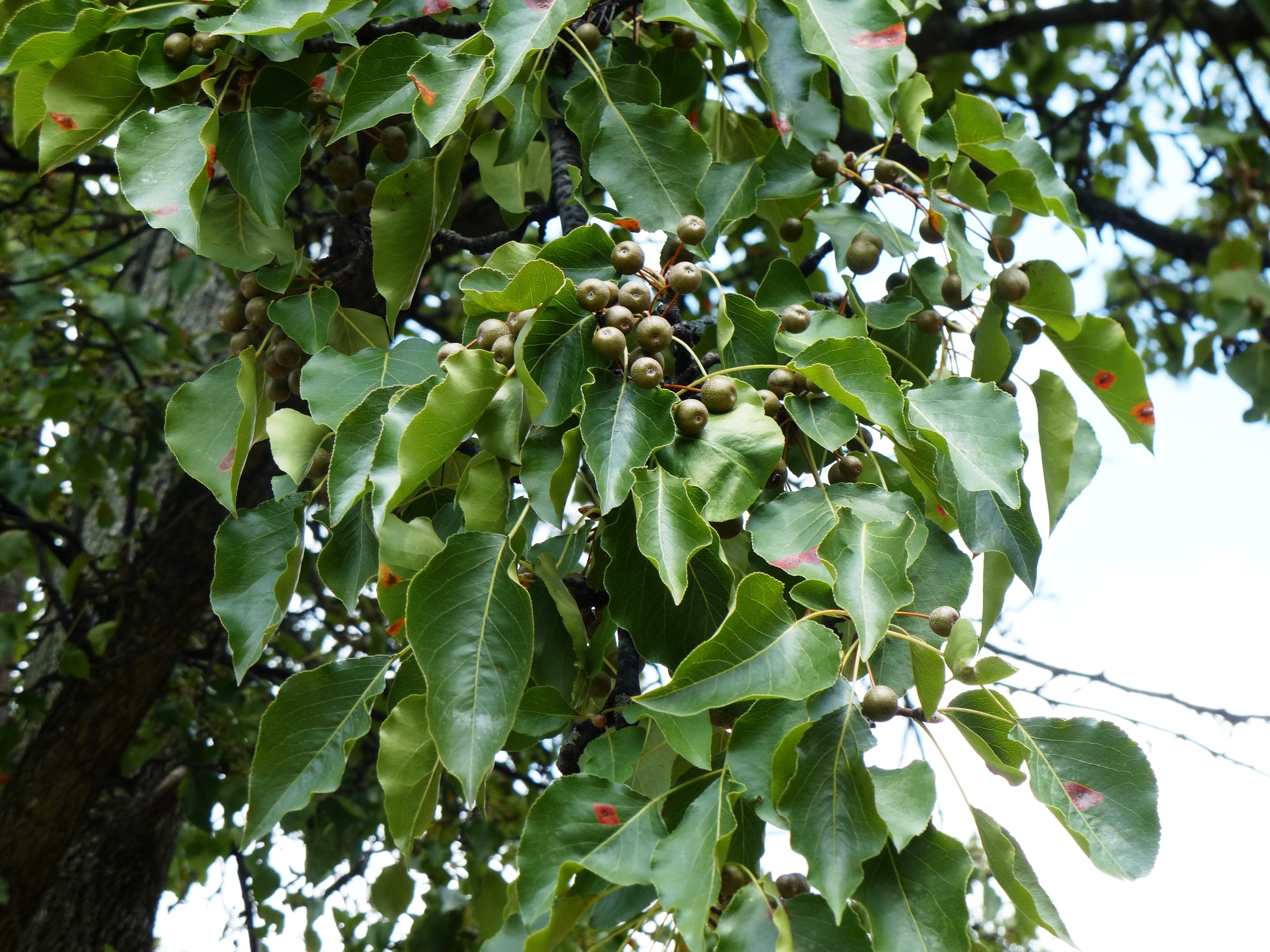 Note: Here is the citation for the Purdue paper: