Portulaca has become my re-discovered, new favorite annual flowering plant.  My wife sowed seed six years ago in our Portulaca-planter shown in this photo; it hasn't been re-seeded or re-planted since.  The planter is setting on our driveway with a southern exposure and gets watered when I think of it which isn't very often.  Over the past four weeks, we've had inconsistent rainfall at our home and day after day of 85 F. or better; many days in the 90s.  The plants are thriving and have never looked better! That's the true value of Portulaca; it loves hot / dry conditions and little to no fuss.  And, as demonstrated by our Portulaca-planter, some varieties are prolific re-seeders.  I call it our seed-and-forget planting.  It's even out-performing some of our tough, dry adapted perennials.

Portulaca was grown by my grandmother in a rock garden.  Actually, it was just a place where we threw rocks from our vegetable garden, but someone in my family found the name "rock garden" in a gardening magazine and it sounded much better than rock pile.  We called Portulaca "moss rose" instead of referring to the genus Portulaca.  We didn't realize we were eating a wild cousin, common purslane (P.  oleracea), that grew as a weed in or vegetable garden.  We enjoyed the blooms on Portulaca in our rock pile/garden and ate the common purslane weed-cousin in our vegetable garden.  There's a fable in there someplace. 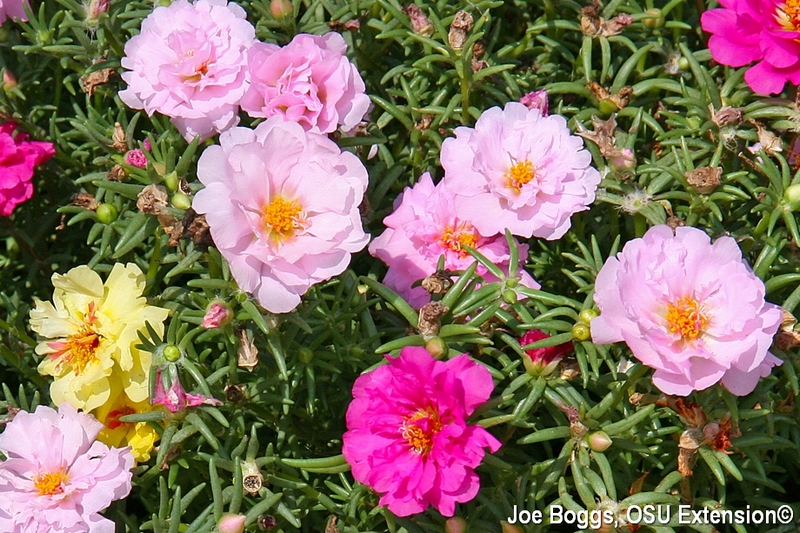 Moss rose describes both the ruffled, rose-like flowers and the mounded, moss-like growth habit of the plants.  Plants are more finely textured than purslane (another hort-slam!) and the flowers come in many shades of red, pink, yellow, orange, white, and purple.  And, it's one tough plant as my homily to moss rose illustrates.