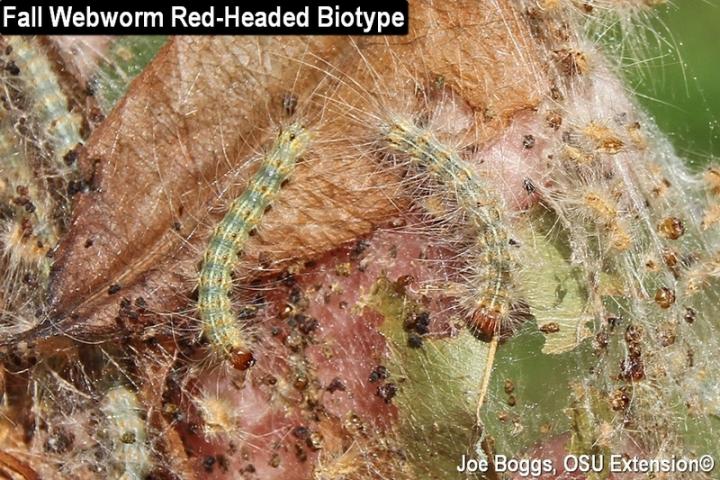 Southern and central Ohio do not appear to be experiencing an "outbreak" of our native fall webworm (Hyphantria cunea) this season.  However, I'm seeing some relatively high localized populations and this lead to a surprising discovery of red-headed webworms in southwest Ohio. 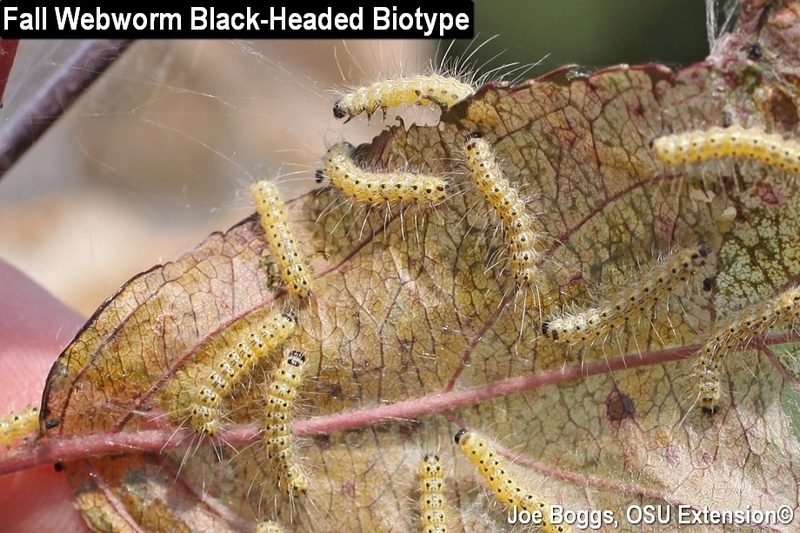 Fall webworm has two distinct biotypes named for the color of the caterpillar's head capsule:  black-headed and red-headed.  I was unaware of this until about ten years ago.  Since that time, I and Curtis Young (OSU Extension, Van Wert County) have ripped open nests around the state to see which biotype we find.  In general, we only found red-headed webworms in the northeast and eastern parts of Ohio and black-headed caterpillars elsewhere.  In fact, I had never found the red-headed biotype in the southwest part of the state.  That changed when I found numerous red-headed nests sprinkled among black-headed nests in Miami Whitewater Forest - Great Parks of Hamilton County. 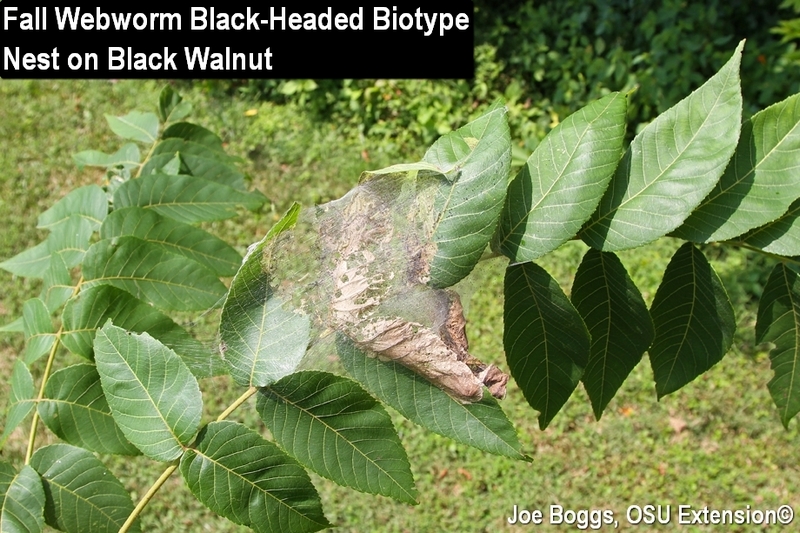 The two biotypes are more than an entomological curiosity.  Black-headed webworms make small nests most likely involving caterpillars from a single egg mass.  Their wispy nests may only involve a dozen or so leaves.  While numerous nests may appear on trees during outbreak years, the damage is usually negligible.  Red-headed webworms make large communal nests involving caterpillars from multiple egg masses.  The size of their nests and the resulting damage can be astonishing, particularly during the second generation. 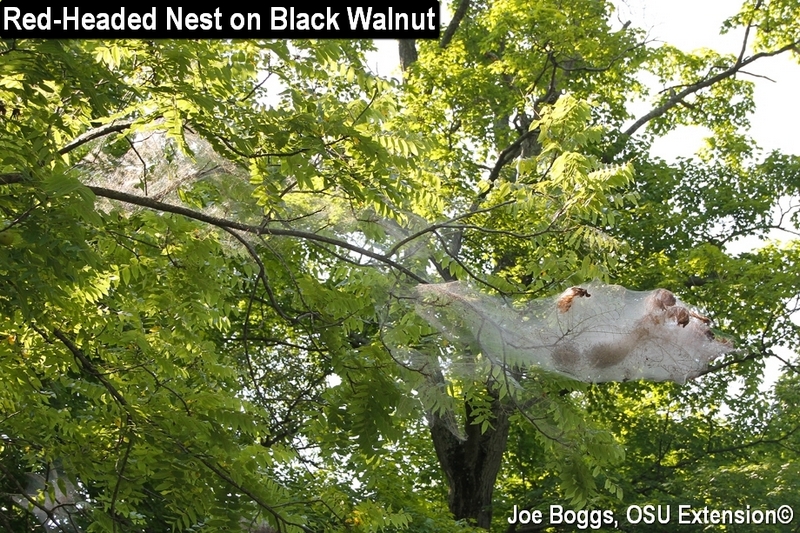 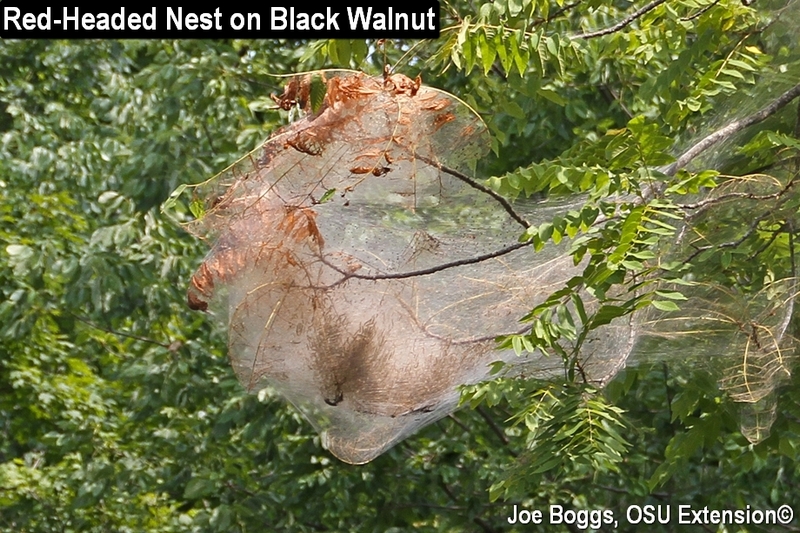 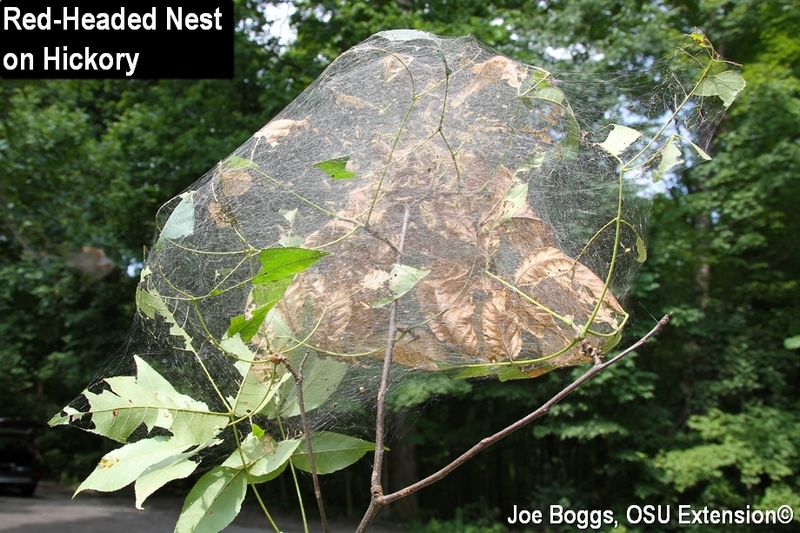 Prior to learning about the two biotypes, I came to view damage caused by fall webworm, even during outbreak years, as only boarder-line significant.  That's because I was only seeing the nesting-feeding work of black-headed webworms.  I was often baffled by the descriptions from my Extension colleagues in the northeast part of the state of huge nests and widespread defoliation.  Of course, my perception changed after viewing first-hand the more destructive nature of red-headed webworms in northeast Ohio.  This was reinforced when I came across some huge nests in Miami Whitewater Park.  I don't know how they got there or if this means we will start seeing a wider localized distribution.  Thankfully, we do know that there are over 50 species of parasitoids, and 36 species of predators known to make a living on fall webworms.  These beneficial insects are very effective in reducing year‑to‑year populations of this defoliator.  But, if you take a drive into the south side of Miami Whitewater Forest past Tanager Meadow and Beech Bluff towards the Tallgrass Prairie Trail parking lot, you'll see the impressive nest-building skills of the redheads. 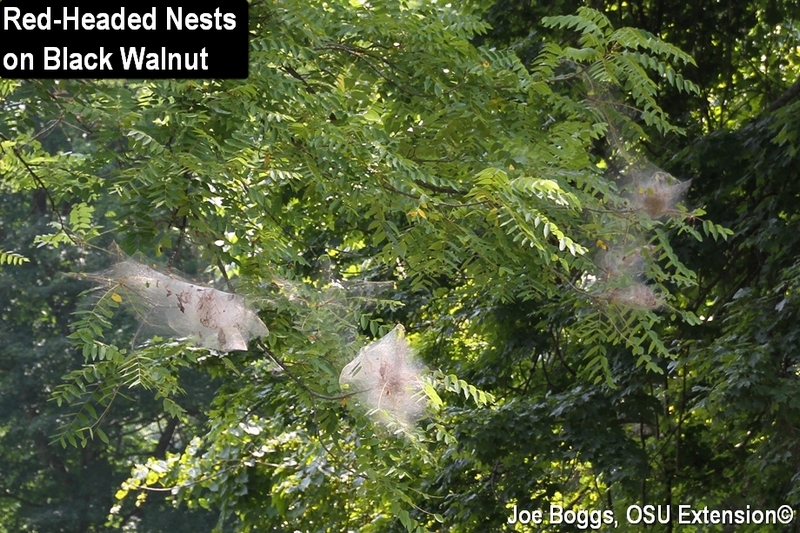