Yellownecked Caterpillars Rear Their Heads and Other End 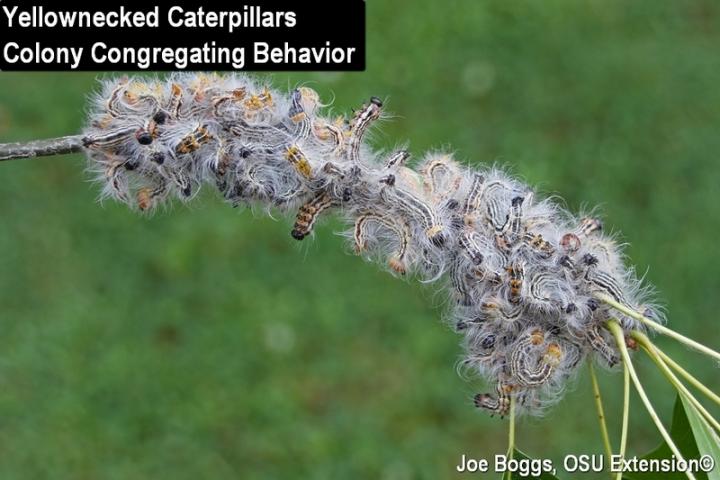 Thanks to the sharp eyes of Lenny Farlee (Extension Forester, Purdue University), the congregated yellownecked caterpillar (Datana ministra) colony shown in this picture was discovered yesterday during a diagnostic walk-about he, Kathy Smith (OSU Extension Program Director - Forestry), and I lead in Shawnee Lookout Park in southwest Ohio.  You may recognize the genus, Datana, because we've had a bumper crop of walnut caterpillars (D. integerrima) this season (see Alert on July 15, 2016, "Walnut Caterpillars on the Prowl"). 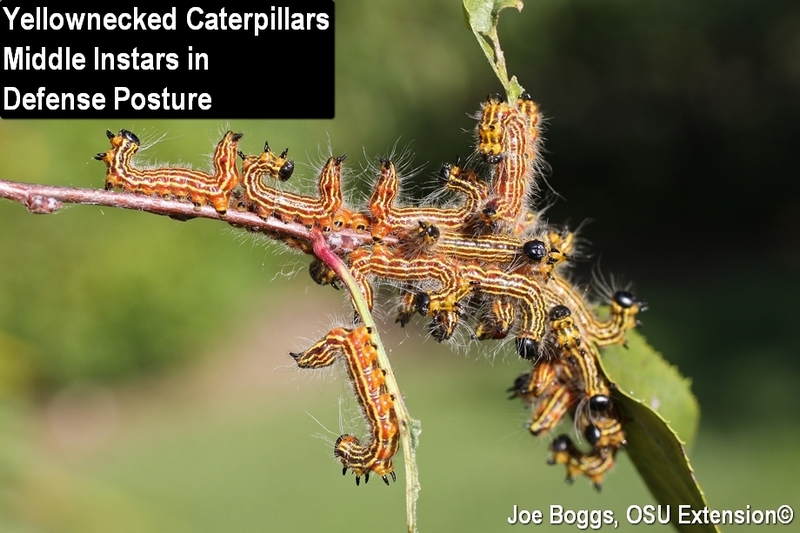 Yellownecked caterpillars feed in groups, or "colonies," throughout their development.  They practice an interesting defense behavior when disturbed:  the entire colony will rear their front and tail ends in unison presumably to confuse predators.  This behavior is shared with walnut caterpillars; both species have great entertainment value! 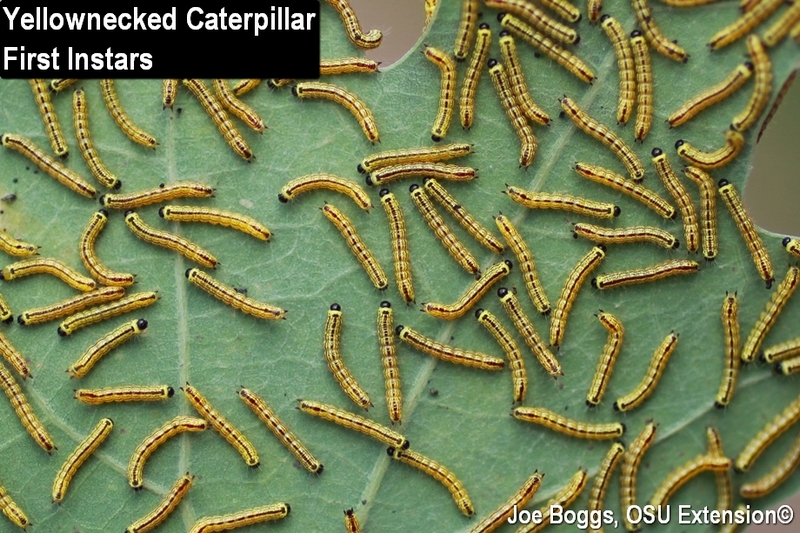 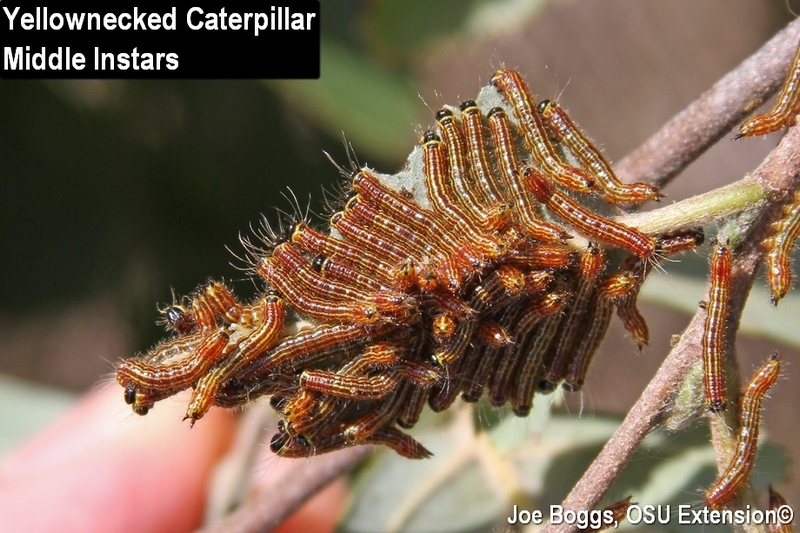 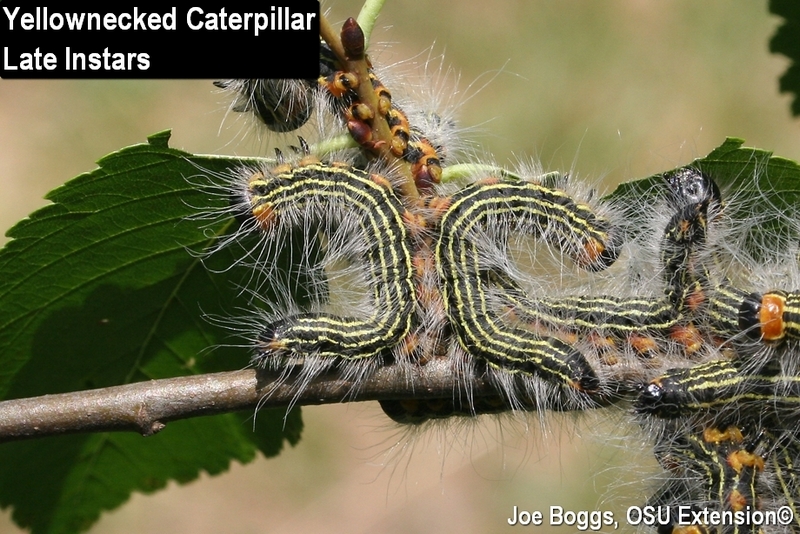 There is one generation per year in Ohio; however, adults lay eggs for over a month so early instar caterpillars may be found at the same time as late instars giving the impression there is more than one generation.  During their development, the caterpillars pass through three distinct "color phases" meaning they change their colors and markings as they mature. Their "yellownecked" common name comes from a yellowish-orange "neck," or prothorax, located just behind their black head capsule.  This feature becomes more apparent during the later instar stages. 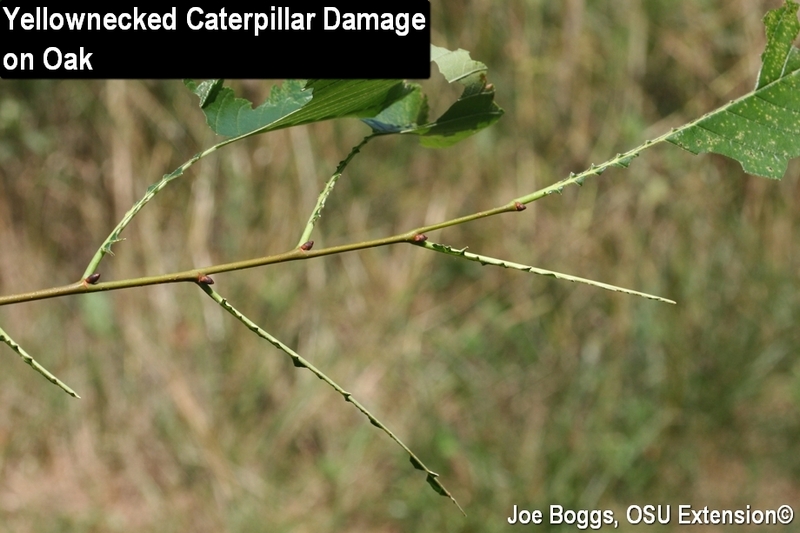 Yellownecked caterpillars are general defoliators and may be found on a wide variety of trees and shrubs including:  beech; boxwoods; crabapples and other ornamental fruit trees; elms; hickories; honeylocust; maples; and oaks.  Since the caterpillars are gregarious feeders, defoliation tends to occur one branch at a time, unless populations are high and multiple colonies are feeding on many branches.

The caterpillars can be suppressed using standard appropriately labeled insecticides.  However, an alternative method that will preserve beneficial insects is to knock the colonies into a bucket of soapy water where they will drown, or onto the ground where they can be dispatched by doing the "caterpillar two-step" dance.  Thus far, no caterpillar populations have become resistant to foot suppression. 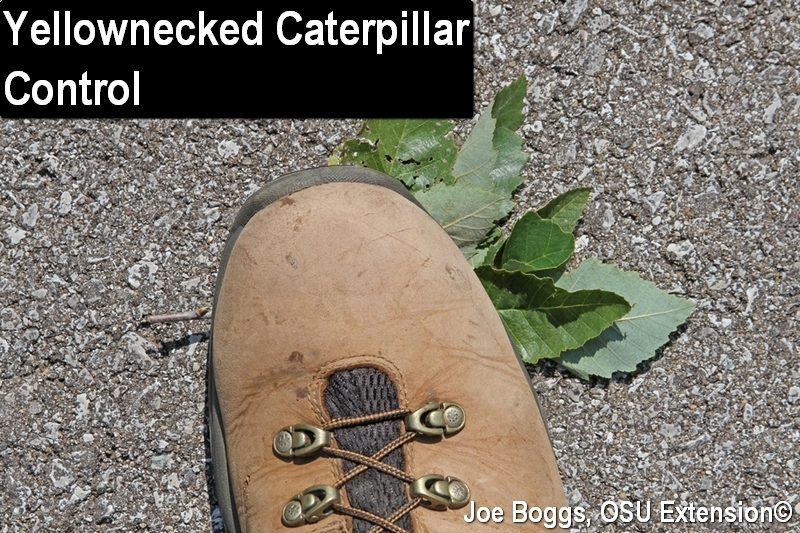