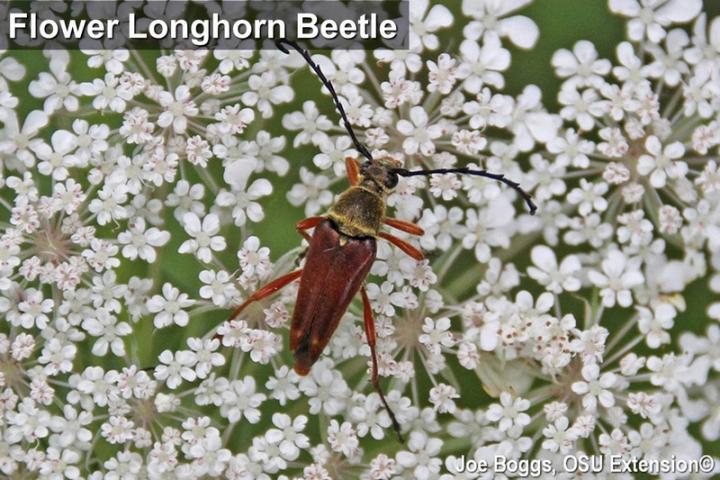 True to their common name, Flower Longhorn Beetles (family Cerambycidae, subfamily Lepturinae) are found on flowers where they feed on pollen and nectar.  They have a particular affinity for the umbel flowers produced my members of the carrot/parsley/celery family (Apiaceae, formerly Umbelliferae).  I always look closely at Queen Anne's lace which is where I found the bachelor beetle shown at the beginning of this report and the cavorting couple shown below.  Flower longhorn beetles are considered plant pollinators although little is known of the extent of their impact. 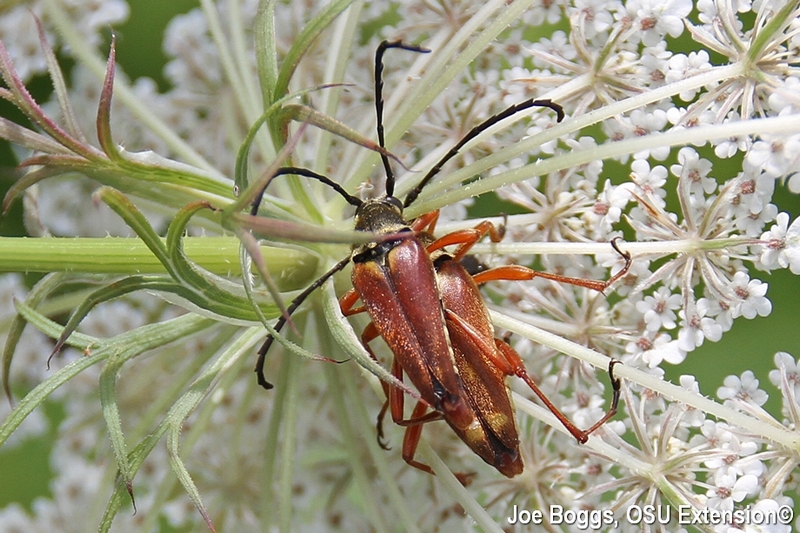 Most species of flower longhorn beetles have rather narrow bodies and very long legs.  They also share the family trait with other cerambycids of having very long antennae.  However, I have no idea why they are called "longhorn" rather than "longhorned" like all the other members of the cerambycid family.  Maybe the first type specimen was missing an antenna (unicorn beetles?).  Or there is a singular rule for the common names of subfamilies.

On the plus side, flower longhorn beetles don't invoke the fear and loathing attached to certain family miscreants like Asian longhorned beetle (Anoplophora glabripennis) (ALB); the de facto family poster child in recent years.  Of course, ALB misbehaves because it's new to our North American trees.  There were no Darwinian live and let live deals because ALB didn't co-evolve with our trees and vice versa.  Hardly a justification for broad-based cerambycidaphobia.

Made-up words aside, flower longhorn beetles spend their larval days as borers, just like other cerambycids.  However, they are not considered pests.  Those species that are tree borers select trees that are stressed, dying, or dead.  Of course, this is also true for the vast majority of native cerambycid tree borers.