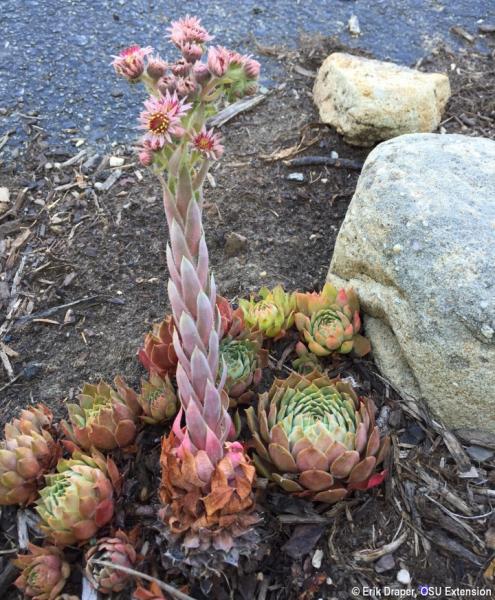 Last week, as I was walking into the office one morning, I suddenly noticed what appeared to be a strange swelling coming up out of the center of one of the succulents, commonly called “hen and chicks” (Sempervivium spp.)  I decided to keep an eye on it as I passed daily since the plants were clustered at the sidewalk by the entrance.

After a couple of days, it began to appear to me that it was going to be a stalk of some kind.  In rapt amazement, I watched as I saw flower buds form on that stalk, which was about 6” tall.  In all of my plant gawking years, I have never seen such a sight!  That hen and chick plant was going to bloom and I had no idea that it could do such a thing!

I then started receiving calls from other concerned citizens asking what was going on with their “hen and chicks” plants and they wondered if they needed to cut off the weird growth.  When I explained what I thought was going to happen, every single person asked me if I was sure that something wasn’t wrong with the plant.  Everyone informed me that these plants were at least 20 years old or more and they had never, ever flowered!  So it was with a great sigh of relief that I finally observed my first “bloomin’ event” on the hen and chicks succulents.  It was worth the wait!

My theory as to why this is happening this year and not in any other previous years… I think we have had the conditions which favor succulents!  Namely, extremely dry to droughty conditions and very warm (upper 80’s & low 90’s) temperatures, accompanied by clear skies and lots of sunshine.  Who could have guessed that such a beautiful result would come from such a parched, hot summer in Northeast Ohio!!!