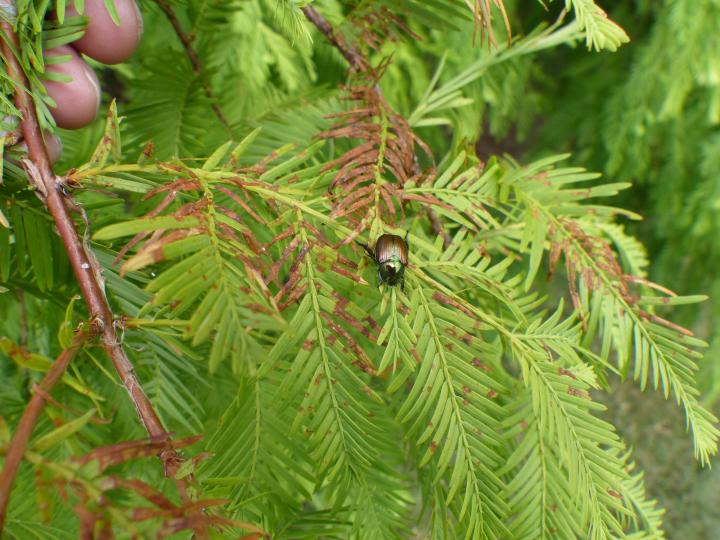 Japanese beetles on a linden leaf or on a rose leaf or flower - to this we are accustomed. On certain plants though, such as cut-leaf rhamnus or as shown here from Wooster, Ohio on dawnredwood (Metasequoia glyptostroboides); somehow it seems like they do not have enough of a perch or dining area.  Perhaps it is the small-plates phenomenon. At any rate, the chewing-mouthparts damage here is quite familiar and Popillia japonica damage to the turf and ornamental industry is huge. In fact, a 2002 paper by Dan Potter and David Held of the University of Kentucky (Annu. Rev. Entomol. 2002. 47:175–205) entitled “Biology and Management of the Japanese Beetle” reported that Japanese beetle adults and grubworm larvae caused more than $450 million in direct control and renovation costs to ornamentals and turfgrass alone at that time.

Taxonomy note: The Popillia genus is in the Scarabaeidae family of insects. Also note that insect families (and other animals) end in “ae”, while plant families end in “aceae”, such as in Cupressaceae for the Metasequoia genus. What is a family, you ask?  A family is a group of related genera (the plural of genus).

Finally, let us now non-celebrate the centennial of the first collection of Japanese beetles in the U.S. (New Jersey, 1916).