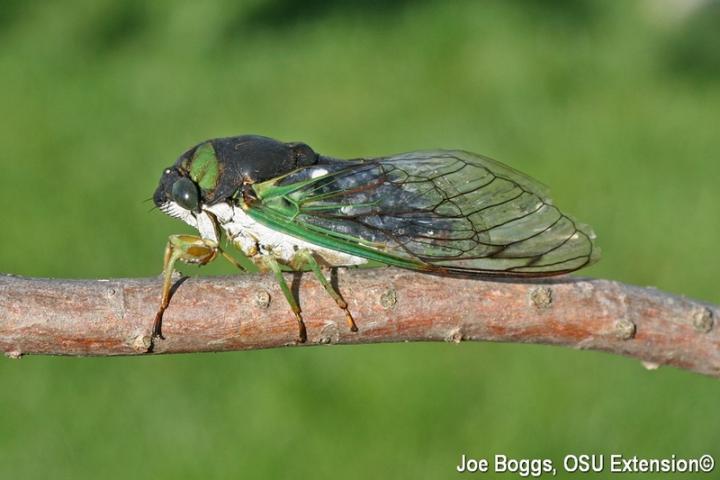 Dog-day cicadas appear sporadically throughout the "dog days" of summer usually beginning sometime in July.  Although it takes 2-3 years for dog-day cicadas to complete their development, some adults emerge every year due to overlapping generations.  Even though dog-day and periodical cicadas do not appear together in Ohio, the two types of cicadas are sometimes mistaken for one another, particularly during years with unusually high dog-day cicada population.  Dog-day cicadas have silvery-white underbellies, greenish-black eyes, green legs and wing veins, and green markings on their black thorax.  Periodical cicadas are usually smaller, depending upon the species.  They have reddish-orange eyes, and reddish-tan legs and wing veins.

As with periodical cicadas, dog-day cicada females use their long, spade-like ovipositors to insert eggs through the bark of twigs and into the white wood.  The resulting damage splits the bark and white wood leaving deep longitudinal furrows of ruptured tissue.  The injury often causes the twig to die, the leaves to turn brown ("flag"), and the twig to detach and drop.   However, owing to the smaller numbers of dog-day cicadas, their egg-laying damage usually goes unnoticed.

Like their periodical cousins, dog-day cicada males also "sing" to attract females.  However, the sound of an occasional dog-day cicada buzzing to entice a female doesn't compare to the cacophony created by a multitude of periodical cicadas; a barbershop quartet doesn't compare to a million man chorus!  An abrupt halt in the buzzing of a cicada, often punctuated by a high-pitched screech, usually means a CICADA KILLER WASP (Sphecius speciosus) has committed an insecticidal act.