The Beringian Land Bridge and the Sumac Gall Aphid 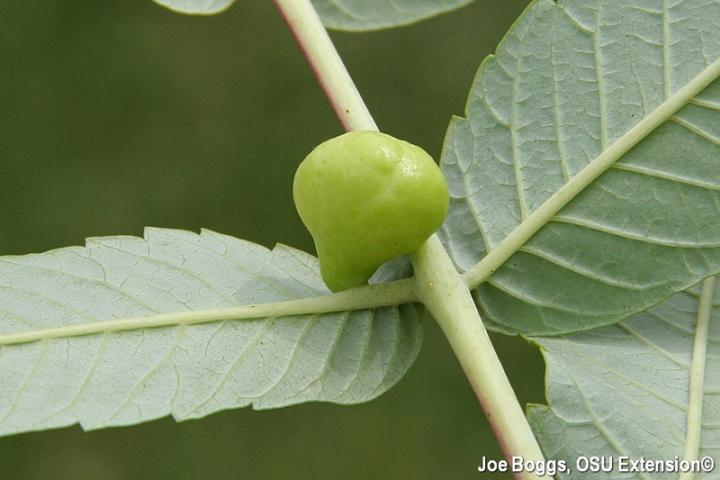 The bladder-like galls produced the Sumac Gall Aphid (Melaphis rhois) are just beginning to develop on the leaflet midveins of its namesake host in southwest Ohio.  The galls are currently light green and so small they may be difficult to detect.  However, as the season progresses, the galls will eventually become more evident growing to 1/2 - 1" in length and becoming variegated with areas that are greenish-white bounded by areas that are mottled reddish-pink.

The aphid has a complex life cycle with summer generations producing galls on sumac and winter generations living on mosses beneath or near the sumac.  Females released from the summer galls drop onto moss where they reproduce and the subsequent generation survives the winter.  In the spring, sexual females migrate to sumac where each female lays a single egg.  Their egg laying activity stimulates gall formation and the single aphid offspring proliferate clonally within the gall.  Although heavy galling may cause early coloring and shedding of some sumac leaflets, the overall impact appears to be inconsequential relative to overall health of affected plants.

International research conducted by Zhumei Ren (School of Life Science, Shanxi University, Taiyuan, China) has shown a prehistoric connection between Asia and North America for the gall-making aphids in the genus Melaphis.  I first met Zhumei last August at a stand of sumac along a walking trail in Liberty Township, OH.  She was on a collection trip hosted by Sue Lutz (Botanist, Smithsonian National Museum of Natural History) that was funded by the Museum's Global Genome Initiative.  To read more about Ren's research and collection trip, click on the hotlink under "More Information" at the bottom of this Alert.

Ren's research has clearly shown the aphids are "biogeographically disjunct" Asian and North American species meaning they are related, but separated geographically.  Even more intriguing, she and her research team have shown that the break occurred sometime during the Eocene–Oligocene boundary approximately 33 to 35 million years ago which coincides with closure of the first land bridge across the Bering Sea which is known as the Beringian Land Bridge I.  Other research has shown that the break between Asian and North American sumac host species occurred at the same time.

The influx of non-native Asian plants and plant pests in recent years, with the Emerald Ash Borer (Agrilus planipennis) being the poster child, may cause us to believe this is a modern occurrence.  However, Asian species have clearly been invading North America, and vice versa, for millions of years.  Indeed, anthropological evidence has shown that humans rode the bio-train that chugged across the Bering Sea land bridges between the two continents.  So, on a grand scale, we were just one of many "non-native invasive" species to settle in North America.