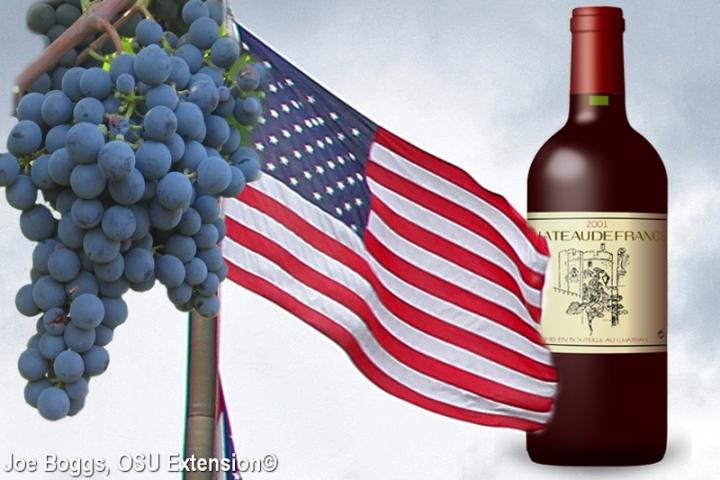 Every time I see the bristly, lumpy round galls produced by the grape phylloxera (Daktulosphaira vitifoliae) on the lower leaf surfaces of wild grape (Vitis spp.), I'm reminded of the story of how an American saved the French (and European) wine industry.  Some may consider it a return on the favor for the French making it possible for us to have something to celebrate on the 4th of July. 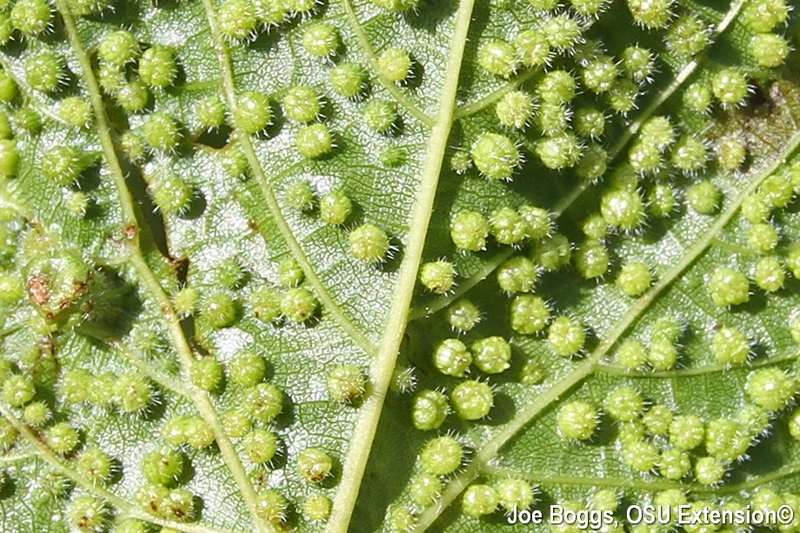 The grape phylloxera is a native sucking insect that's related to aphids.  It has a complex life cycle that involves both root forms as well as foliage forms.  The foliage forms produce the galls that are the most apparent indicator of a phylloxeran infestation.  The root forms are hidden beneath the soil where they use their piercing-sucking mouthparts to draw juices from the roots and to inject toxins that prevent roots from healing.  Their damage causes nodule-like growths to form on roots.  However, since native grapes co-evolved with the grape phylloxera, our grapes evolved defenses including the ability to ooze sticky sap from their roots that saps the vigor of the phylloxera.  This is not the case with the European grape, V. vinifera; the mainstay of the French and European wine industries. 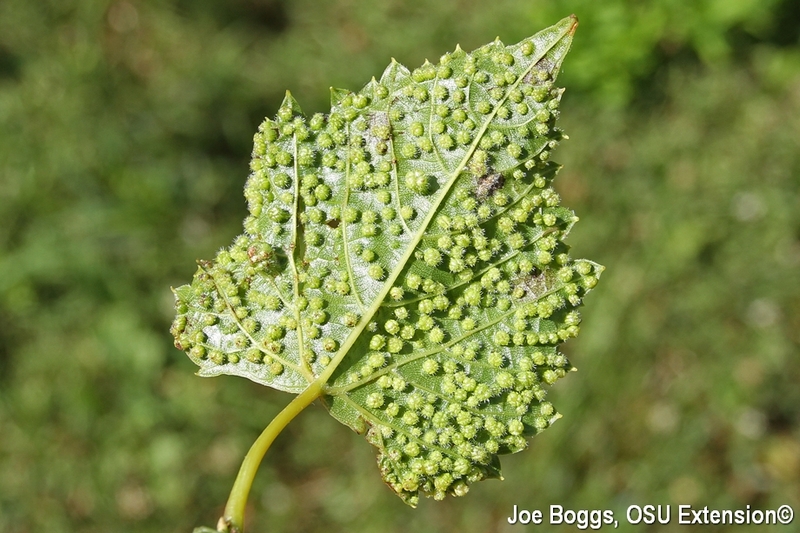 The grape phylloxera hitchhiked to England in the 1850s on specimens of American grapes collected by British horticulturists.  After devastating British vineyards, the phylloxeran moved onto the mainland where it wreaked havoc on the highly susceptible V. vinifera grapes as it spread across Europe. By 1889, 2/3rds of all vineyards in Europe and been destroyed.  Total wine production was cut by 57% in France alone from 1875 to 1889.

The European phylloxeran plague drew the attention of the accomplished American entomologist, Charles Valentine Riley (C.V. Riley).  He had been appointed Missouri's first State Entomologist in 1868 and was named the Chief of the U.S. Entomological Commission and Chief Entomologist for the U. S. Department of Agriculture in 1876.  He was also the Curator of the Smithsonian Institution's national insect collection from 1878 to 1895.  C.V. Riley is sometimes called the "Father of Biological Control" for his work in saving the California citrus industry from the cottony cushion scale (Icerya purchasi) by introducing the predaceous Austrialian vedalia beetle.

Riley was among the first to observe that the American grape, V. labrusca, was resistant to grape phylloxera.  American grape plants could be infested, but they were not killed.  Working with the French botanists Jules Emile Planchon and Pierre-Marie-Alexis Millardet, Riley pioneered grafting French grapes onto V. labrusca root stock to produce plants resistant to the phylloxera. Since genes that direct grape fruit development reside in upper portion of the graft, the scion, and not in the root stock, the grafted plants retained the flavor profiles of the French grapes.  In 1884, Riley was awarded the French Grand Gold Medal and was named a Chevalier of the Legion of Honor.  To say that Riley's work saved the French and European wine industries is no exaggeration.

On Monday, we commemorate the adoption of the Declaration of Independence by the Continental Congress on July 4, 1776.  The significance of the 4th has nothing to do with actually winning our independence from Britain.  That didn't happen until the Treaty of Paris was signed on September 3, 1783.  To say that the French made it possible for us to have something to celebrate on Monday is no exaggeration; just Google the "Siege of Yorktown."