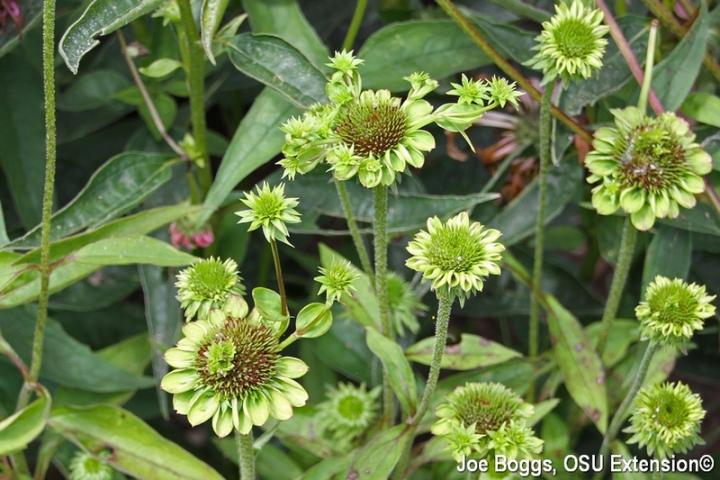 Stunted and deformed coneflower plants are symptoms of Aster Yellows.  Of the three coneflower problems I'm presenting in this series, Aster Yellows is the most serious and its control requires the most extreme measures.  This is a serious, chronic disease that occurs throughout North America and may affect over 300 species of plants in 38 families including a number of vegetables such as carrots and potatoes.  However, as its common name implies, the disease most occurs on members of the aster family (Asteraceae (= Compositae); coneflowers appear to be particularly susceptible.

The disease is produced by a phytoplasma.  These single celled organisms were once referred to as "mycoplasma-like organisms"; however, they are now classified as a group of very small, specialized bacteria.  All known forms are plant pathogenic; they are obligate parasites of plant phloem tissue.  Phytoplasmas are naturally spread from plant to plant by sucking insects, particularly leafhoppers.  Symptoms of aster yellows include: chlorotic, curled foliage; stunted stems; and bizarrely distorted flower parts.  Flower petals may appear as a ring of tiny greenish-yellow spoons arrayed around the base of highly deformed cones.  Cones may appear as tightly clustered rosettes. 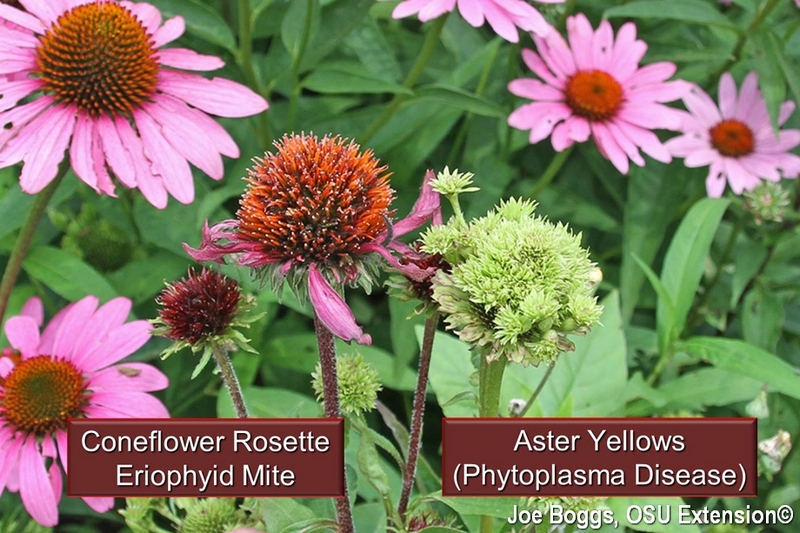 Symptoms produced by Aster Yellows are sometimes mistakenly identified as damage caused by the aforementioned coneflower rosette mite.  Indeed, images can be found on the web that clearly show mite damage but are mislabeled as symptoms of the disease.  The main differences between mite and disease symptoms are the colors of the rosettes.  Aster Yellows produces yellowish-green rosettes while the mites produce rosettes that usually retain some of the original color of the cones.  Of course, the mites do not affect the rest of the plant; their damage is confined to the flower cones.

Aster Yellows wreaks havoc on all parts of the plant.  There are no sprays that will suppress the disease and once plants become infected, they remain both infected and infectious which means they serve as a constant reservoir of the phytoplasma to be spread to other plants.  Thus, sanitation is key to managing the disease.  All parts of the plant including the root system must be removed and destroyed.  As with all phytoplasmas, the Aster Yellows pathogen cannot survive outside of the plant so the bacterium will not remain in the soil.