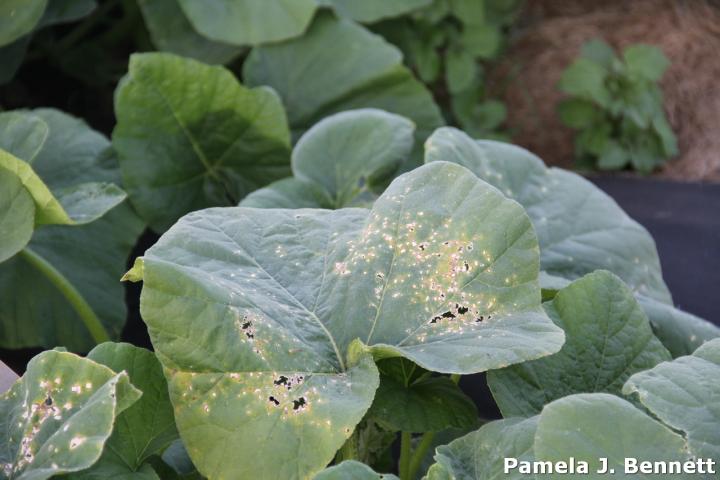 While inspecting my garden the other day, I discovered that my cucumber leaves had some tiny holes in them.  Upon further inspection I discovered a few striped cucumber beetles.  Populations seem to be moderate on my plants at this time in the Clark County area, but I am not taking any chances.

Both striped and spotted cucumber beetles can cause serious damage on plants such as cucumbers and melons.  In addition, I have seen considerable damage to perennial flowers when beetle populations are high.   I tend to have more trouble with the stripped beetle as opposed to the spotted but last night, while doing a Vegetable Garden Workshop, I found a single spotted cucumber beetle on a coneflower.

Striped cucumber beetles are about a quarter of an inch long and are a yellowish color with three slate-black stripes down their back.  The spotted cucumber beetle is similar except it has 12 black spots on the back.  They overwinter in the soil as adults, emerge in the early spring and lay eggs.

Both feed on foliage, flowers, and pollen.  In addition to damaging flowers and foliage, they also transmit bacterial wilt, a devastating disease for plants in the cucurbit family, especially cucumbers and melons.  The beetles infect the plant and the disease quickly spreads throughout the plant, leading to wilt.  Other cucumber beetles are attracted to the infected plants and continue to vector the disease to healthy plants.

There is nothing you can do once the plant is infected with the bacterium.  Remove and dispose of the plants.  The best option is to prevent the spread of bacterial wilt by preventing the beetles from feeding.

Row covers are effective for excluding the beetles in the early part of the season.  Heavy populations of overwintered cucumber beetles can destroy newly-emerging seedlings.  Row covers need to be removed in order for pollination to occur, therefore, since most cucumbers are in the production stages now, row covers are not useful.

Pesticide sprays are the best choice now; they need to be applied on a regular basis during this period of heavy feeding.  This can mean spraying every two weeks during peak activity.

The beetles are good hiders and are sometimes hard to find.  However, their damage is very visible on the leaf surface; tiny holes that turn brown around the outside edges are easy to see.  If you suspect cucumber beetles and can't find them, take a piece of paper and place under the vine.  Knock on the leaves gently and chances are you will knock them onto the paper.  I found mine the other night by knocking them off the plant and onto my black fabric mulch.

Use an insecticide that is labeled for vegetables and says it controls cucumber beetles.  These products would contain permethrins, esfenvalerate, or carbaryl.  If you have had a history with these beetles on your garden plants, next spring start early in the season at planting time using row covers.  Remove row covers when blooms start to appear for pollination and then switch to sprays.