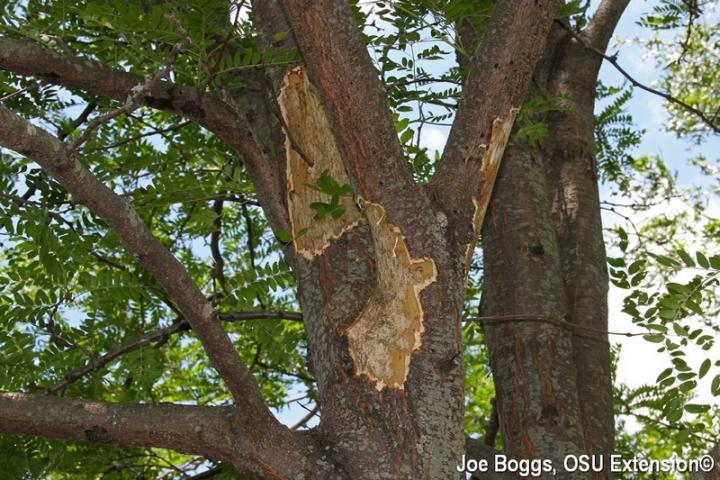 Earlier this week, Dr. Mike Klahr (Extension Agent, Horticulture, Boone County Cooperative Extension) shared photographs sent to him by a homeowner of bark stripping damage caused by squirrels on a honeylocust in a landscape in Boone County, KY.  Thanks to Mike, he and I were able to visit the site yesterday so I could take photos to illustrate this report.  We found that all of the debarking damage seemed to be focused on a single tree; we could not find damage on other trees on the property as well as on trees in neighboring properties including on a large oak that had a squirrel leaf-nest. 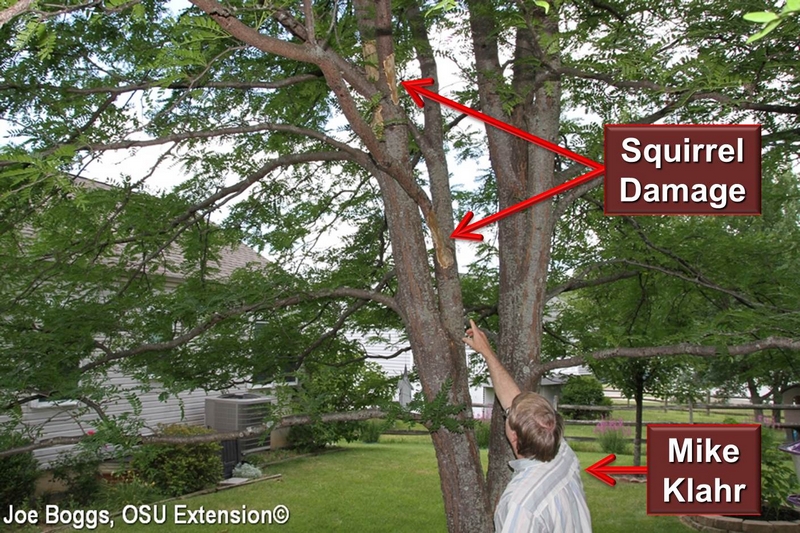 Squirrels can injure trees in two ways:  by stripping bark and by lopping off twig tips.  The twig pruning causes no real damage with the result mimicking tip-pruning done to increase canopy density.  However, as shown in these images, debarking by squirrels can potentially girdle trees.  This behavior has been linked to several squirrel species in North America including eastern gray (Sciurus carolinensis) and fox (S. niger) squirrels as well as two so-called pine squirrels; the red squirrel (Tamiasciurus hudsonicus) and Douglas pine squirrel (T. douglasii).  Gray squirrels target a wide range of deciduous trees although damage in Greater Cincinnati has primarily focused on American beech, honeylocust, and maples.  As with other areas of the country, bark stripping primarily occurs in our region from April through early July.  Thankfully, bark stripping by squirrels remains somewhat rare in North America.

This is not the case in the United Kingdom (UK).  Eastern gray squirrels were introduced to various areas in the UK from the late 1880s through the 1920s.  They are now wreaking havoc throughout the UK producing widespread severe debarking of woodland and landscape trees and threatening biodiversity; gray squirrels have caused reginal extinctions of their native red squirrel (S. vulgaris).  Consequently, much of the research aimed at explaining why gray squirrels strip bark has been conducted in the UK. 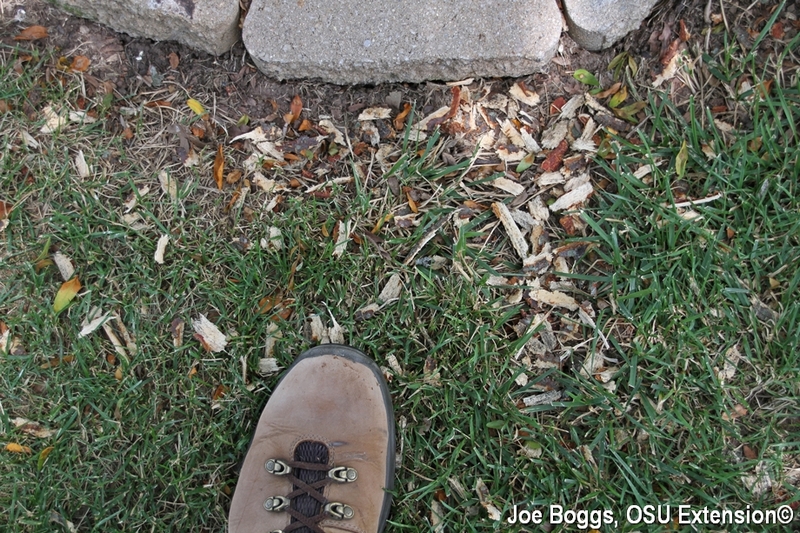 Until recently, reasons posited on both sides of the Atlantic for the odd behavior ranged from reasonable hypotheses such as feeding on the sugar-rich phloem, searching for a water source, gnawing on trees to wear down ever-growing incisors, to the bizarre such as pregnant female squirrels gnawing bark in response to their pain.  However, a paper published in February, 2016, provides a helpful literature review as well as a synthesis of findings in support of a newly emerging explanation known as the "Calcium Hypothesis" [Nichols, C.P, J.A. Drewe, R. Gill, N. Good, N. Gregory. 2016. A novel causal mechanism for grey squirrel bark stripping: The Calcium Hypothesis.  Forest Ecology and Management 367, 12-20]. 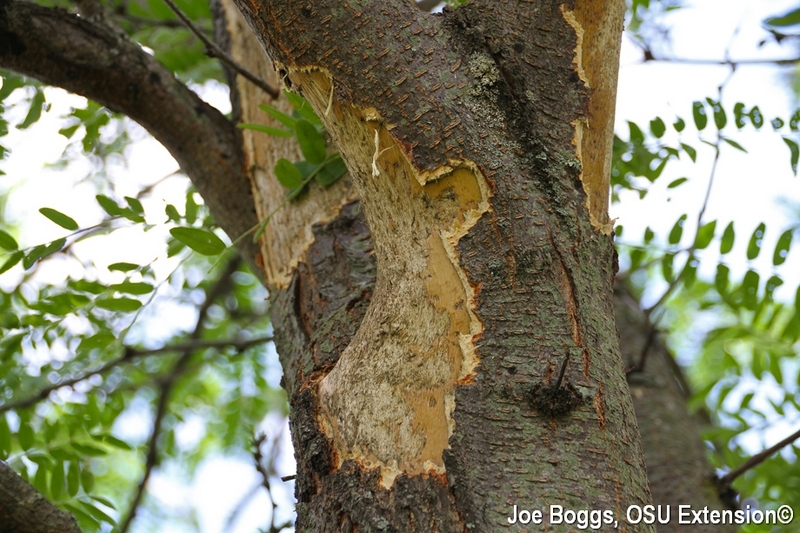 The authors do a nice job of building the case that bark stripping by gray squirrels is driven by their need for calcium at a time of the year when this essential nutrient is in short supply through available food sources; from April through July.  Citing past research, they note it is well documented that gray squirrels will gnaw on calcium rich sources such as bones, antlers, and even limestone.  They also show that debarking is most common after a good mast year supports an elevated population of juvenile squirrels in need of calcium to build bone as well as post-pregnant females in need of replacing lost calcium during pregnancy and nursing.  Finally, they link the need for calcium by squirrels to the elevated levels of available calcium in tree phloem in the spring to early summer.  The authors state, "Calcium can increase in the phloem by as much as 40% in trees in Spring and Summer after Winter dormancy, as it is required for growth."  Indeed, it appears that squirrels may "taste test" trees prior to stripping bark as shown in the photo below.

I've only provided a very short overview of this interesting paper.  As noted by the authors, the exact reasons behind bark stripping by squirrels may vary from location to location.  And, they stress that more research must be done to truly pin down the reason(s) for this odd behavior in the UK.  Although they do not include this caveat, their Calcium Hypothesis may not apply to gray squirrels in their native range in North America.  On the other hand, their findings provide rich ground for further research. 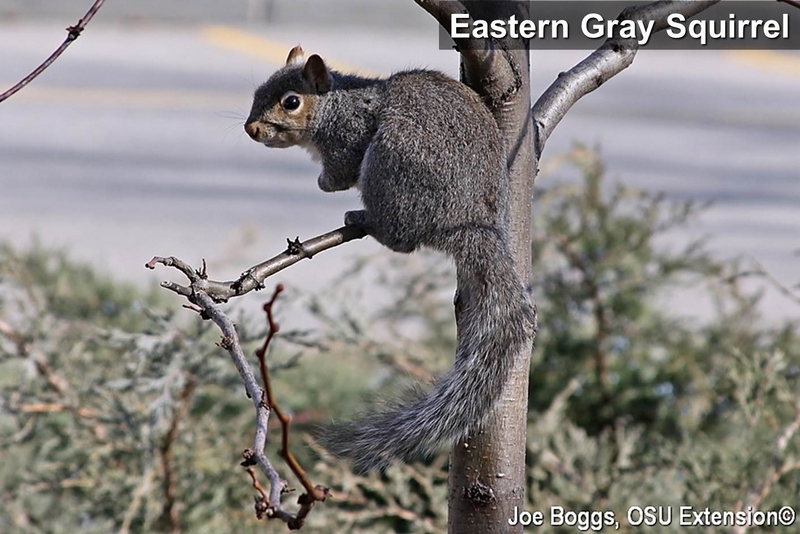 You can read their entire paper by clicking on the hotlink under "More Information" at the bottom of this Alert.