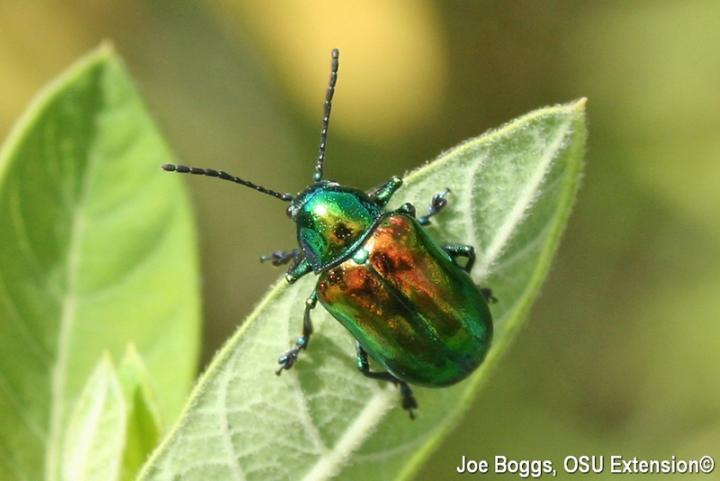 Earlier today, I came across one of the most beautiful beetles found in Ohio.  The beetle lacks a common name, but is generally referred to as the "Dogbane Beetle" because it primarily feeds on dogbane.  The beetle's scientific name is Chrysochus auratus, which loosely translates to "made of gold."  Indeed, these beautiful iridescent beetles may look like gleaming spots of gold on the leaves of dogbane, or they may blaze with an array of other shimmering colors depending on your angle to the beetle.  A slight change in viewing angle will cause the beetles to glisten with multiple shades of green, copper, blue, and red.

The beetles are found during the day feeding and resting on dogbane leaves.  They are not picked-off by predators because of their nasty chemical defense strategy.  Like common milkweed, dogbane has milky sap that contains poisonous alkaloids (cardiac glycosides).  The beetles ingest the cardiac glycosides, store them in glands, and then secrete them when threatened by predators.  This is different from the chemical defense strategy employed by other insects that feed on milkweeds.  However, the results are the same with their bright coloration advertising their ability to wage chemical warfare against predators.