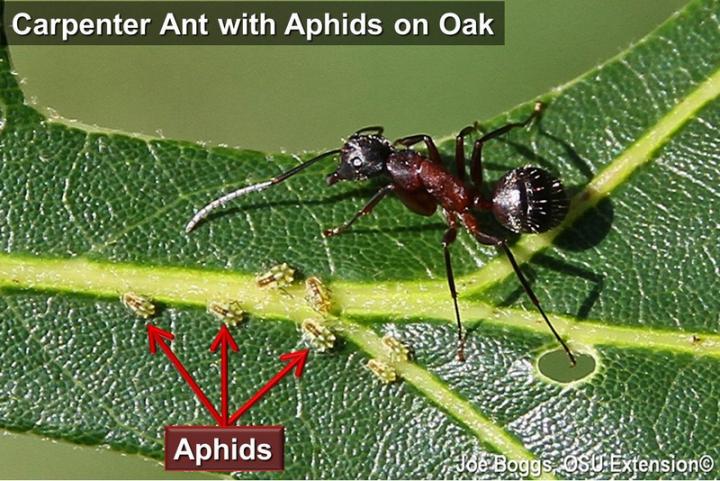 The term "myrmecophile" means "ant lover."  It's derived from the Greek "myrmex" = ant, and "phlos" = loving.  Myremecophile refers to aphids that have a special relationship with ants.

I came across aphids surrounded by carpenter ants (Camponotus sp.) late last week on white oak leaves in Mt. Airy Forest (Cincinnati).  While hiking a trail yesterday, I saw another group of aphids on poplar that were likewise drawing the attention of black field ants (Formica sp.).  Entomologists have long known that some aphids have a special relationship with ants, and vice versa. Popular descriptions of ant-aphid relationships often focus almost exclusively on the role played by the honeydew exuded by aphids. It's often reported that the ant's shepherding services are based on occasional sips of this sweet treat.

However, reducing ant-aphid relationships to being solely driven by a sugar bribe does a disservice to the depth of the connection.  Indeed, ants do sip honeydew which provides small amounts of amino acids (to produce proteins) as well as large amounts of carbohydrates.  But, ants can be predators as well as scavengers, so why don't they not just eat the aphids to get a huge amount of protein?  In fact, they do.

Ants keep their aphid sheep from overpopulating by harvesting a few every now and then.  In this way, they gain protein and keep the aphids from sucking themselves out of house-and-home by killing their host plants.  Ants will pick-up and move their aphids around to re-distribute their flock and they keep their flocks clean by removing cast skins and other detritus; they take out the aphid trash.  Finally, ants defend their aphid-flock against natural enemies.  You can test this by putting a finger near the ants, but not too closely.  We don't have any stinging ants in Ohio, but they can certainly bite!

Aphids aren't the only myrmecophiles; the term also applies to many other sucking insects such as soft scales, psyllids, and tree hoppers as well as certain fungi and bacteria that are cultivated by some ants.  Cherry trees are also myrmecophiles.  The glands on the leaf petioles are extrafloral nectaries; in return for a sip of nectar, the ants protect the leaves against defoliating insects.