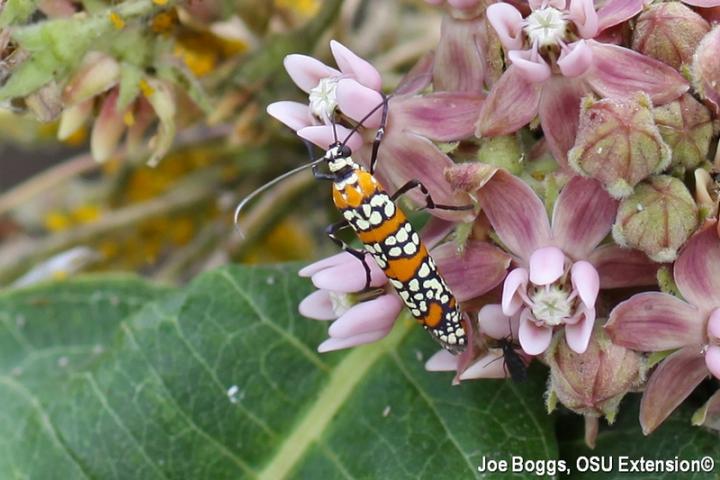 Ailanthus webworm moths (Atteva aurea) are flying to porch lights in southwest Ohio.  In my opinion, this is one of the most beautiful moths found in Ohio both because of their coloration and because of what their caterpillars eat.  Caterpillars of this ermine moth (Family Yponomeutidae) feed exclusively on the non-native, highly invasive Tree of Heaven (Ailanthus altissima).

Ailanthus webworms are native to tropical regions in Central and South America where the caterpillars feed on native trees in the genus Simarouba (family Simaroubaceae).  The moth was originally assigned the scientific name, Atteva punctella, and it was known that the moth jumped from its native hosts to the non-native Tree of Heaven (Simaroubaceae).  It was assumed the moths exploited the ever-expanding range of Tree of Heaven to move north into the U.S. and Canada.  However, research involving DNA bar-coding, moth morphology, and food plant records eventually revealed that while A. punctella and A. aurea co-inhabit tropical regions of the New World, the moth in the U.S. and Canada is A. aurea.

Ailanthus webworm moths are multivoltine meaning that there are several generations per year.  The caterpillars are capable of defoliating their odoriferous namesake host and they may feed on stem tissue once all leaves are devoured.  Unfortunately, such extreme damage is rare on large trees.  Although feeding by this webworm has yet to halt the spread of tree of heaven, hope springs eternal since this is one of only a few insects known to infest this encroaching interloper.