An Oil Beetle is on the move in Lucas County, Ohio 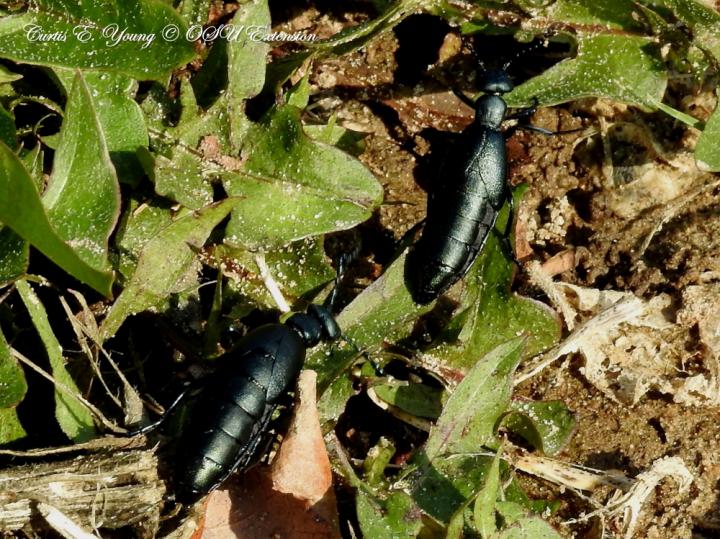 An oil beetle, Genus Meloe (possibly M. campanicollis) has emerged on the scene this fall in Lucas County and possibly elsewhere in Ohio. It is a type of blister beetle belonging to the Coleopteran Family Meloidae. If it is M. campanicollis, it does not have a common name other than the general group name of “oil beetle”.

When threatened, the oil beetles release an orange, oily liquid at their leg joints containing a chemical called cantharidin. Cantharidin is both poisonous and caustic. If consumed in a high enough dose, it can be lethal, especially to horses. There is no known antidote to the poison. If cantharidin gets on the skin and is not washed off quickly, it will burn and blister the skin.

In addition to being defended by cantharidin, they have other intriguing aspects to their lives and bodies. As seen in the images, the abdomens are very large and not covered by the elytra (front wings).  They lack hind wings, thus cannot fly. They must walk everywhere they need to go. Their bodies, legs and elytra are dull black to oily, metallic blue to purplish in color depending on how the sun hits them and how old they are.

Males and females differ slightly in appearance. Males tend to be a little thinner than females. The shape of the male’s antennae is noticeably different from the females’. Midway down the length of the male’s antenna is a c-shaped “kink” in the antennomeres. During courtship activities, the male repeatedly strokes the female’s antennae through these “kinks” in his antennae. You can almost hear him whispering to the female while stroking her antennae, “Baby, you are so beautiful! You and me, we could make some beautiful eggs together!”

The adults are plant feeders and eat grasses and other low growing vegetation. The larvae (grubs), on the other hand, parasitize the nests of solitary ground bees where they feed on the eggs and food provisions of the bees. The way they get to these sites is also unique.  The first instar larvae of the oil beetle are called triungulins. When the triungulins hatch from their eggs, they climb the stems of plants as a group where they cluster together and release a chemical attractant. The attractant released by the larvae mimics sex pheromones of the solitary bees. This draws male bees to the cluster of beetle larvae that grapple onto the bee to hitch a ride to a female bee. While the bees are mating, the beetle larvae transfer to the female bee, that unwittingly carries them to her nest.