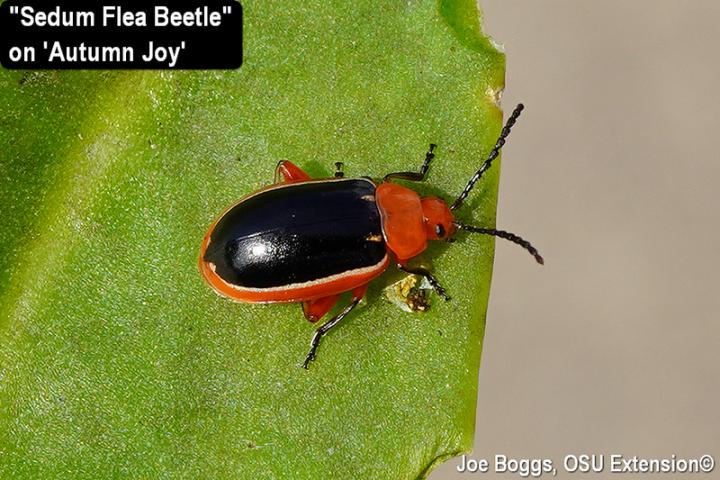 Brightly colored flea beetles feeding on stonecrop (family Crassulaceae) in southwest Ohio were first reported in the BYGL in 2011.  The leaf and stem damage caused by both the adults and larvae was so severe on Orpine (Hylotelephium telephium (synonym Sedum telephium)) ‘Autumn Joy’ it was difficult to identify the plants as sedum. 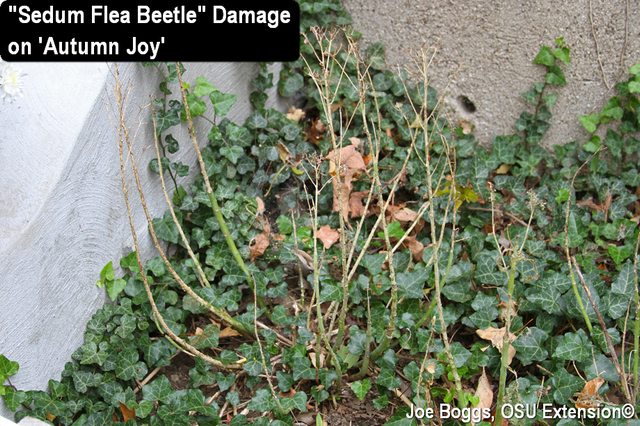 Since that time, the beetles have been observed in southwest Ohio feeding on H. telephium ‘Munstead Dark Red’, H. spectabile ‘Autumn Fire’, and String Stonecrop (Sedum sarmentosum).  Plants were growing in home landscapes as well as public gardens and the beetles were not found feeding on any other plants besides stonecrop. 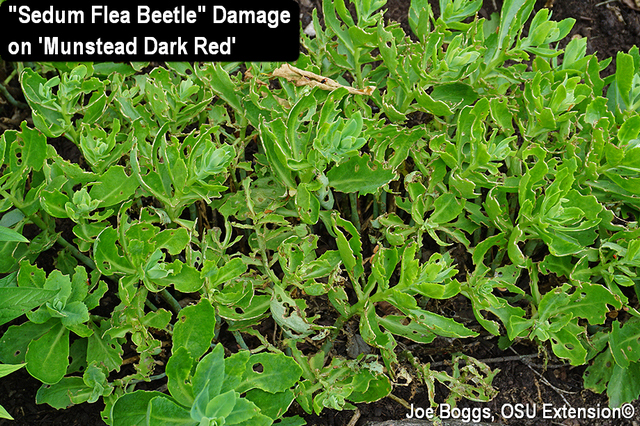 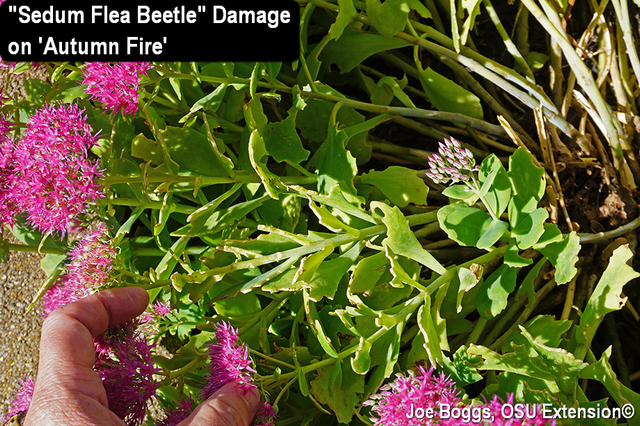 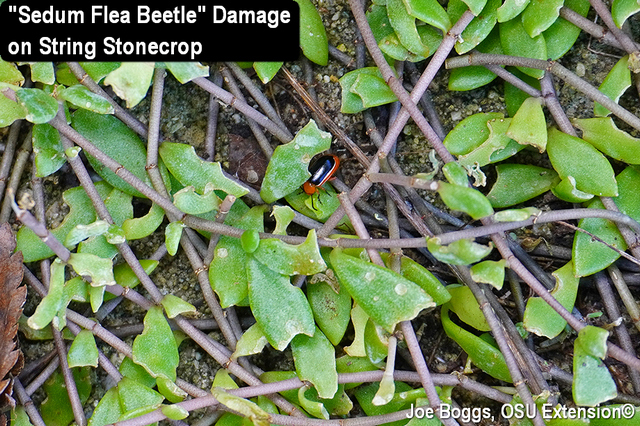 Flea beetles belong to the leaf beetle family Chrysomelidae.  The beetles are so named because of their ability to jump like a flea to flee.  This survival strategy is supported by greatly enlarged, powerful femurs on their hind legs. 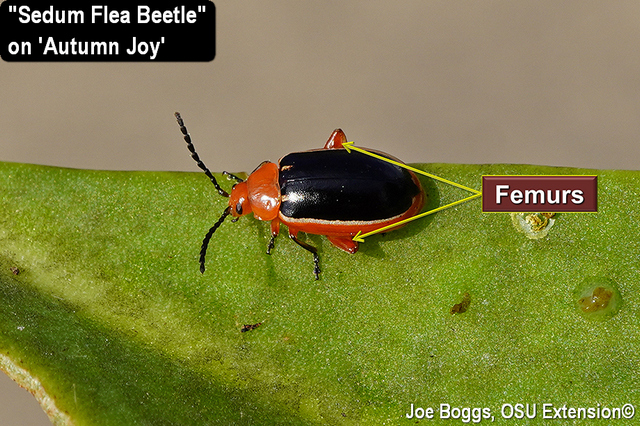 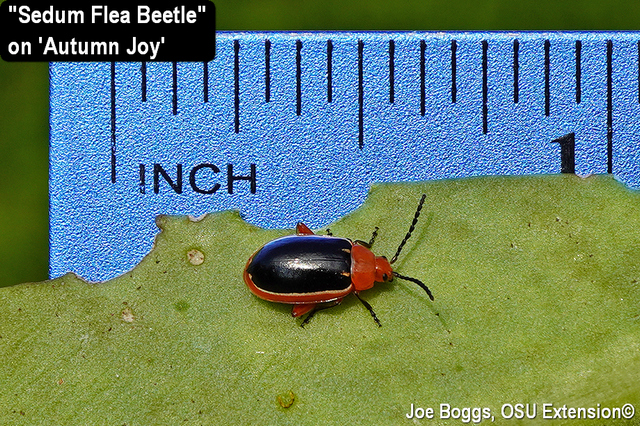 Sedum flea beetles have bright orange to orangish-red bodies and black eyes and antennae.  Their bi-colored legs have femurs that match the color of the body while the tibia and tarsi are black. 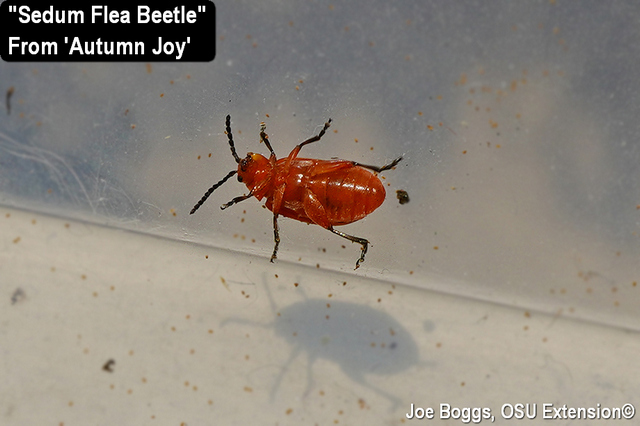 The name of the beetle order, Coleoptera, refers to the hardened front wings (elytra) that cover and protect the hind wings and abdomen (Coleo = sheath; ptera = wing).  Sedum flea beetles have black elytra trimmed along their outer edges in a narrow, mottled band that’s off-white.  The bands expand slightly at the hind tips of the elytra creating a dark pointed marking. 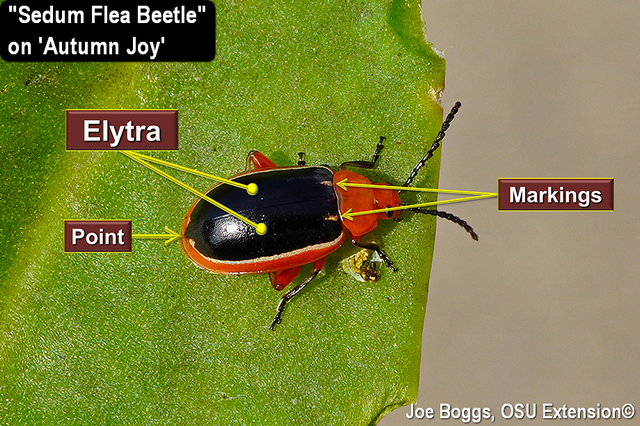 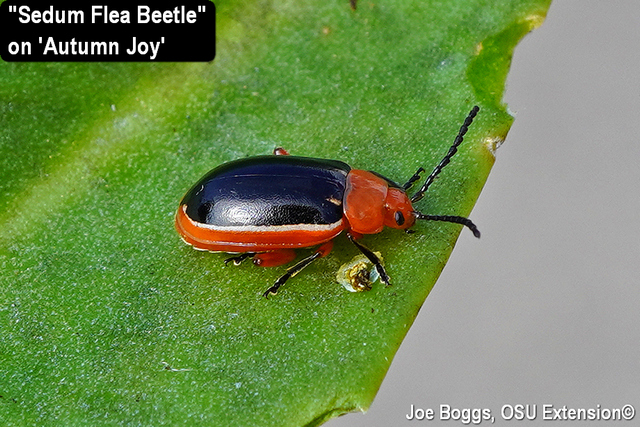 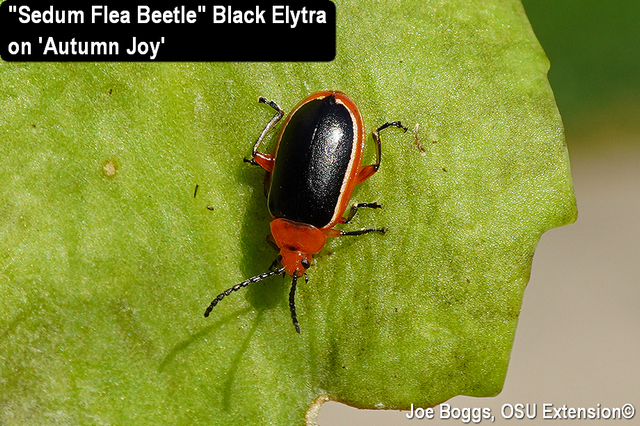 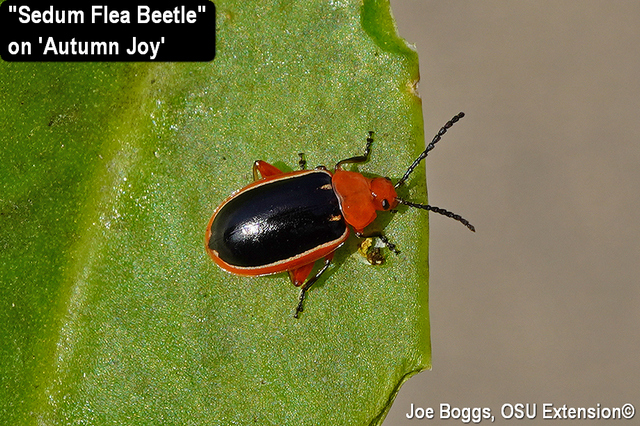 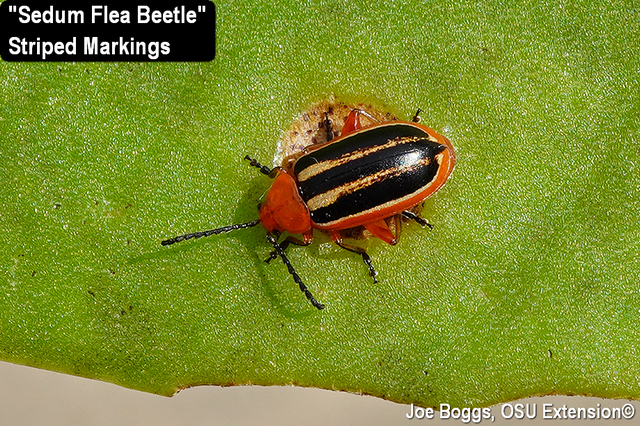 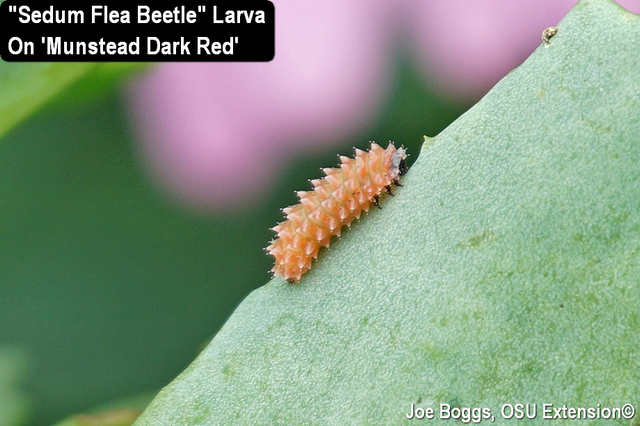 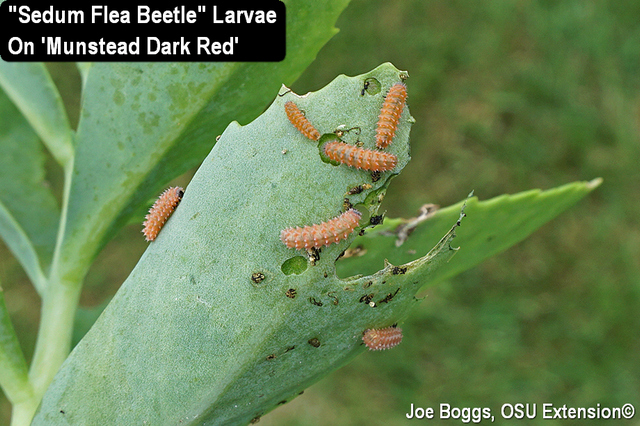 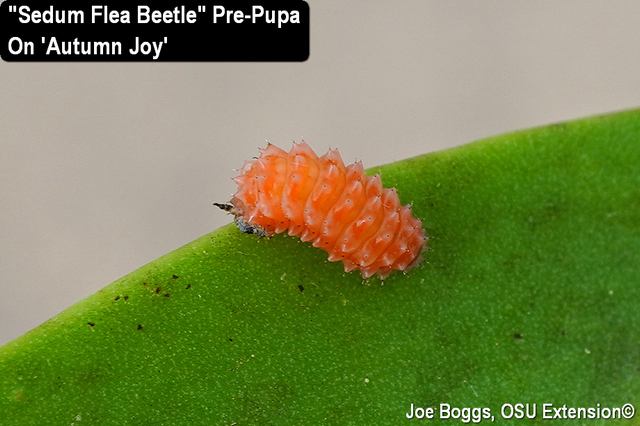 Most flea beetles feed by producing small, distinct “shot holes” in the leaves of their host plants.  Sedum flea beetles produce different feeding symptoms.  Both the adults and larvae remove large areas from the leaves by chewing the upper leaf surface to produce deep furrows and holes or feeding along the edges to produce deep notching. 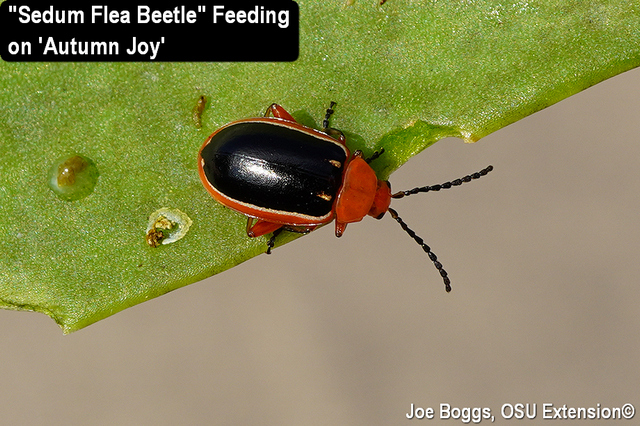 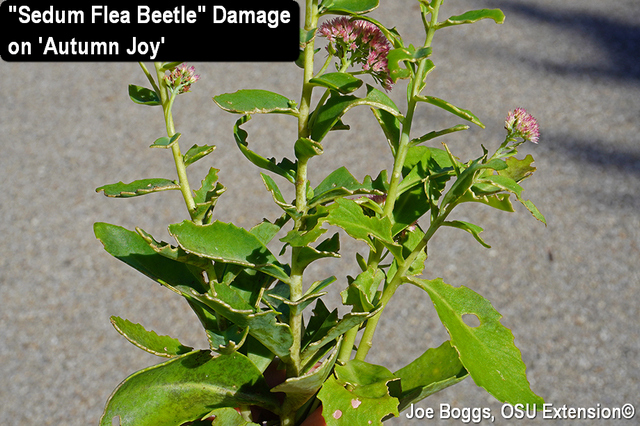 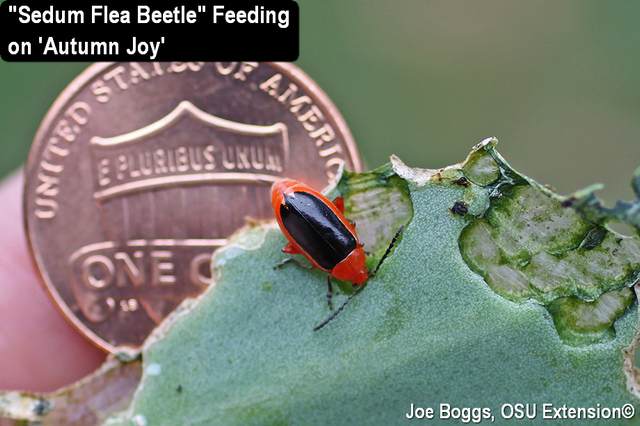 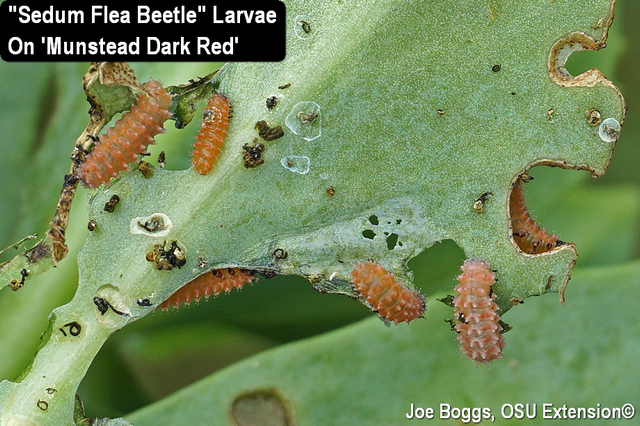 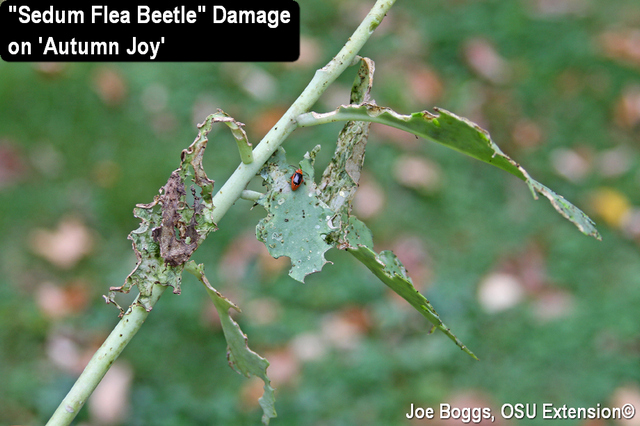 If heavy leaf damage lessens foliage food, the adults will readily move onto the stems removing the outer-most tissue.  This is the most extreme damage produced by sedum flea beetles. 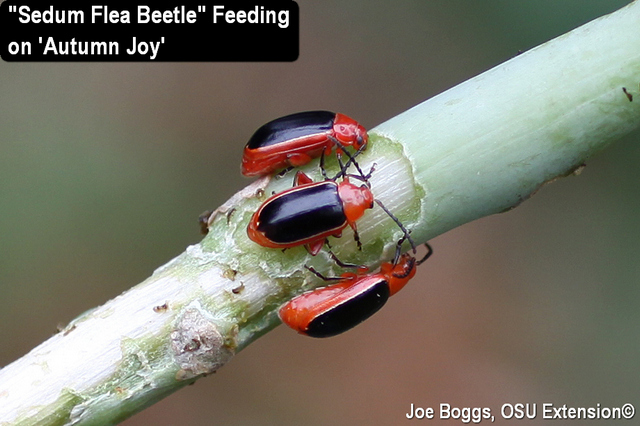 I’ve observed and received credible reports of beetles and larvae feeding on stonecrop from early June through mid-October.  This suggests the beetles have at least two generations per season in southwest Ohio, if not more.  Thus, the damage may increase with each succeeding generation.

The sedum flea beetle is the spitting image of the Passionflower Flea Beetle (Disonycha discoidea, family Chrysomelidae).  You can see pictures of this beetle posted on “BugGuide” by clicking on this hotlink:

However, the authors of Host Plants of Leaf Beetle Species Occurring in the United States and Canada (see “Literature Cited”) note that the passionflower flea beetle only feeds on passionflowers including Passiflora incarnata and P. lutea.  In fact, neither Sedum spp. nor Hylotelephium spp. are listed as hosts for this or any of the 30 other flea beetle species belonging to the Disonycha genus. 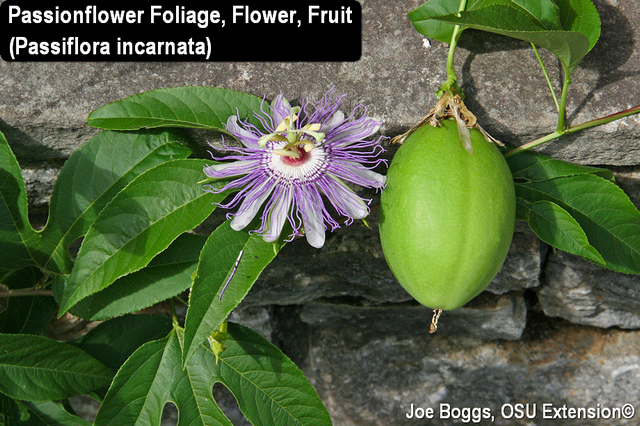 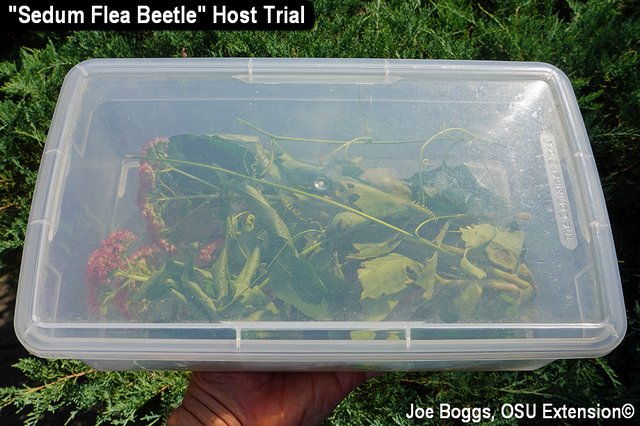 My “quick-and-dirty” feeding trial was by no means a scientifically acceptable host preference study given there were no replications.  Also, the assessment of the amount of feeding between the two hosts was entirely subjective. 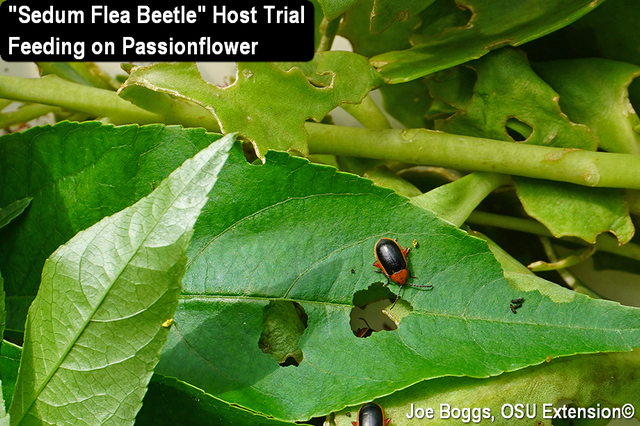 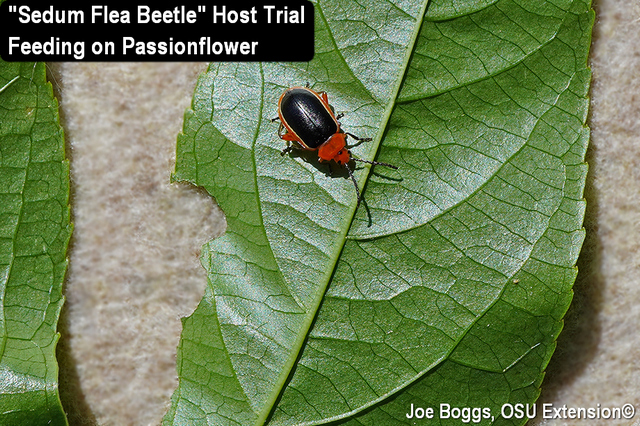 On the other hand, if passionflower is the beetle’s primary host, I would have expected heavy feeding in both cages.  Instead, the heaviest feeding occurred on the stonecrop foliage.  Thus, I’m not entirely convinced the “sedum flea beetle” I’m finding on stonecrop in southwest Ohio is the same species as the passionflower flea beetle.

Regardless of the true identity of the beetle, landscape and production managers should be alert for this flea beetle causing damage to stonecrop.  Although I can find no reports of this flea beetle on stonecrop, the incidence of damage has been increasing in southwest Ohio since 2011.  Management can be problematic given that many types of stonecrop are highly attractive to pollinators, particularly H. telephium ‘Autumn Joy’.

On the other hand, based on personal observations, the heaviest damage occurs on stonecrop growing under challenging conditions.  Although stonecrop has a reputation for being able to thrive under difficult conditions, there is a limit.

For example, the following images show Orpine ‘Autumn Joy’ infested with sedum flea beetles.  However, I believe a vigorous growth rate was masking the severity of the damage.  I only noticed the infestation after pushing the stems over to expose the foliage. 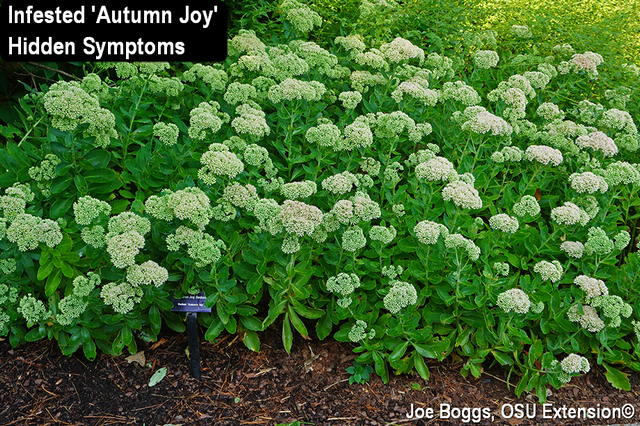 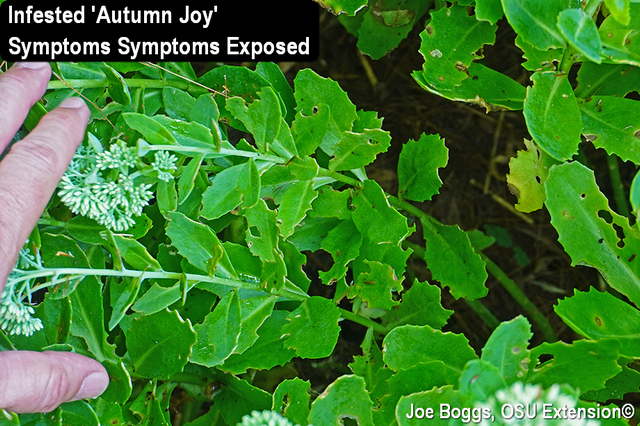 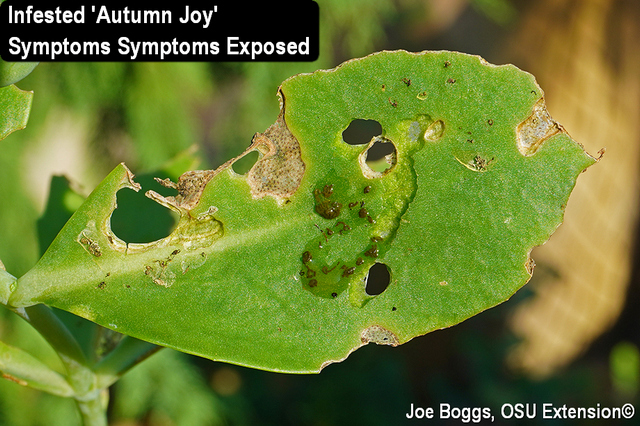