Peonies Have Measles... What The Heck?? 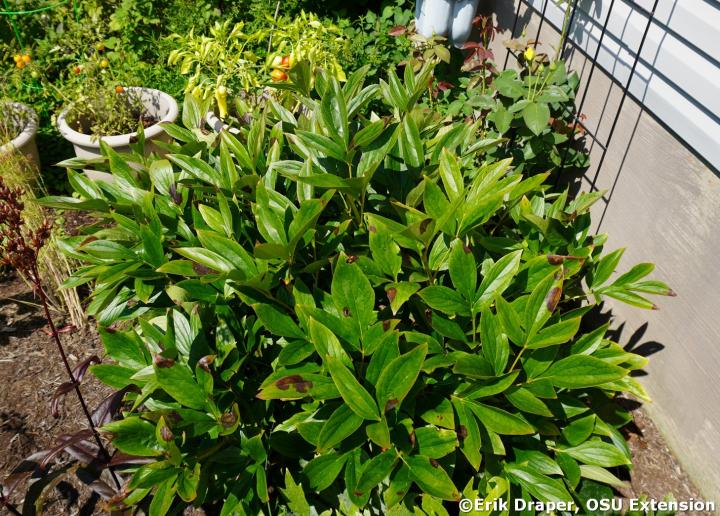 I was outside strolling through the Drapescape enjoying the colors and scents of flowers, when suddenly, I noticed there appeared to be spots on the leaves of the peonies.  I just had to take a closer look, of course, being the plant diagnostic devotee that I am!   The symptoms were so classic and marvelous that I had to take a few moments to just admire them!  This disease is called a plethora of names, like peony blotch, red spot, stem spot, leaf blotch disease and finally, peony measles!  The causal fungus, Graphiopsis chlorocephala, was formerly known as Cladosporium paeoniae.

This fungus begins by infecting peony leaves, resulting in distinct glossy, purplish-brown circular spots or lesions on the upper surface of the leaf.  On the lower side of the leaf, those same spots are more of a milk chocolate brown color.  However, later as more infections on the leaves occur, the spots begin to merge or coalesce into blobs, patches or blotches, as pathologists like to call them!

While most infections begin initially on peony leaves; however, they can also appear on young stems as individual, raised spots.  These spots on the stems will eventually merge and form what appear to be short, elongated, reddish-brown to purple streaks.  These “measly” spots and blotches may also begin to appear on flower buds, petals and can eventually, even show up on the seed pods!

In NE Ohio, peony blotch tends to show up mid-to late in the growing season and one of the best ways to help yourself manage this disease is to use sanitation!  Since this disease overwinters on plant tissue, cut off and remove all the above ground plant growth, right down to the soil line.  Be sure to discard or destroy all plant debris and DO NOT COMPOST IT!  It’s the previous year’s infected plant tissue that serves as the main source of inoculum, releasing those fungal spores in the Spring.

Peony measles more often impact older peony varieties, dwarf peonies and red peonies, which appear to be more susceptible to this fungal pathogen.  Thankfully, this disease of peonies is merely a superficially ugly, aesthetic problem, rather than directly impacting the plant’s vigor or overall health.  Many of the new varieties of peonies have shown increasing resistance to peony leaf blotch.

You can also improve the situation with a few horticultural adjustments of how these plants are cared for in the growing season.  When watering these plants, avoid overhead irrigation or wetting the foliage.  Keep the foliage dry by using drip-irrigation or watering low down near the plant base as much as possible.  If plants are close to one another, create some space for air movement.  You can selectively prune plants to improve air circulation, which will reduce the time required to dry leaf surfaces and stems.

If that doesn’t improve the peony measles presence, fungicides may also be used to manage this fungal disease.  Simply protect the new peony shoots using an appropriately labeled fungicide and typically, just one or two applications of product are required.  Thoroughly read and check the product label to ensure not only the application site (e.g landscape, nursery, etc.) is listed, but also that peonies are not listed as being sensitive to the product.  Now you are armed and ready to get out there and massacre those mysterious measles of peonies!