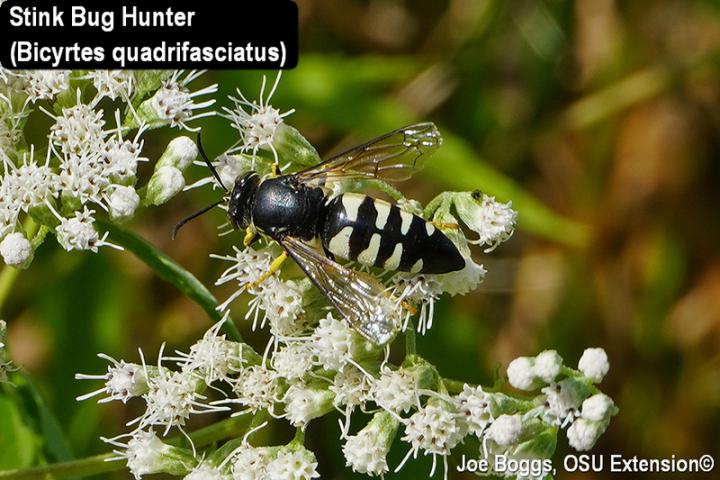 It’s well documented that a wide range of enemies of insect pests are fueled by nectar. Many beneficial insects wear two hats by serving as both plant pollinators and enemies of other insects.  In other words, an effective long-term pest management strategy is to simply plant flowering plants that provide nectar. 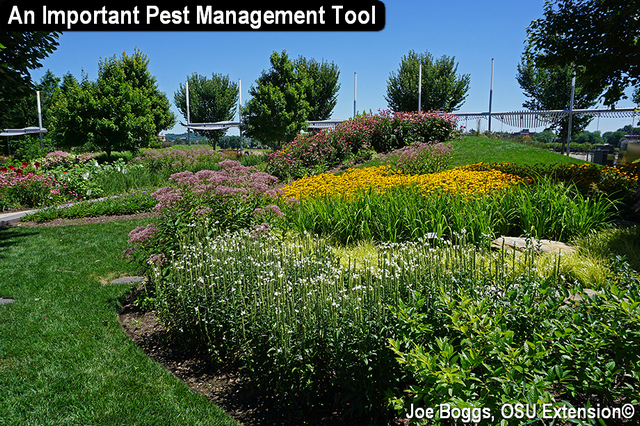 Yellowjackets (Vespula spp. and Dolichovespula spp.), Baldfaced Hornets (D. maculata), and Paper Wasps (Polistes spp.) (family Vespidae) are misunderstood stingers.  They provide a twofer as plant pollinators and predators of soft-bodied insects including caterpillars and sawfly larvae.  Many of their food items are significant plant pests. 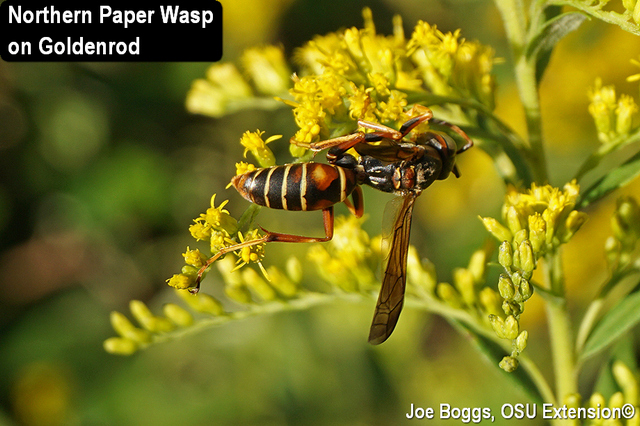 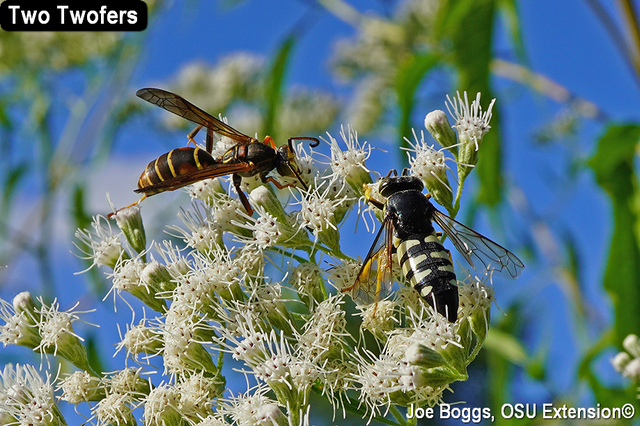 Another example of a "twofer" is the Stink Bug Hunter (Bicyrtes quadrifasciatus) which is sometimes called the Four-Banded Stink Bug Wasp.  The females have four abdominal stripes which are referenced in their specific epithet, quadrifasciatus, which means "four banded."  This native “sand wasp” is an arch enemy of stink bugs including the non-native invasive Brown Marmorated Stink Bugs (BMSB) (Halyomorpha halys). 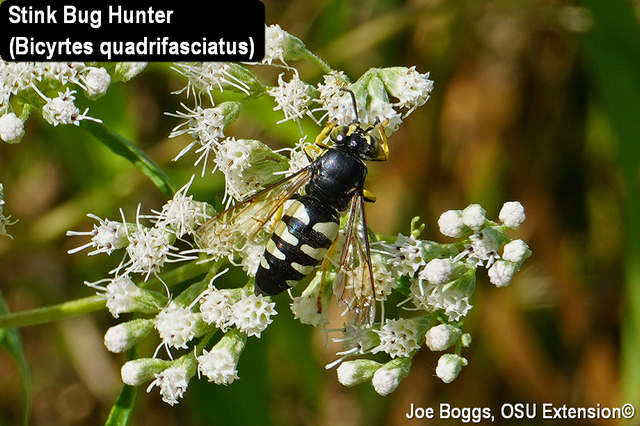 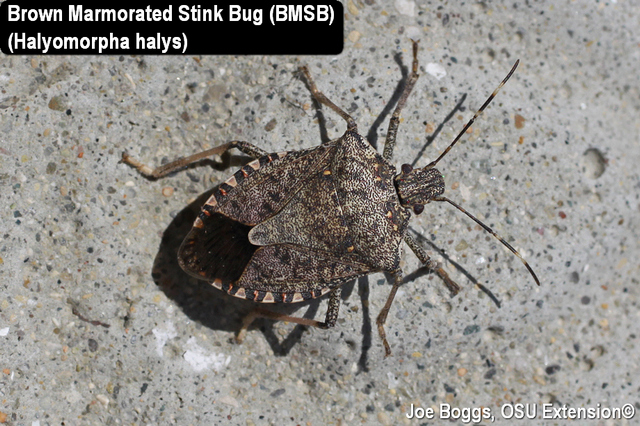 The stink bug hunter belongs to the family Crabronidae which also includes the Eastern Cicada Killer (Sphecius speciosus).  Both of these native wasps have conspicuous cream-colored abdominal markings on a black background; however, stink bug hunters are only about 3/4ths the size of cicada killers. 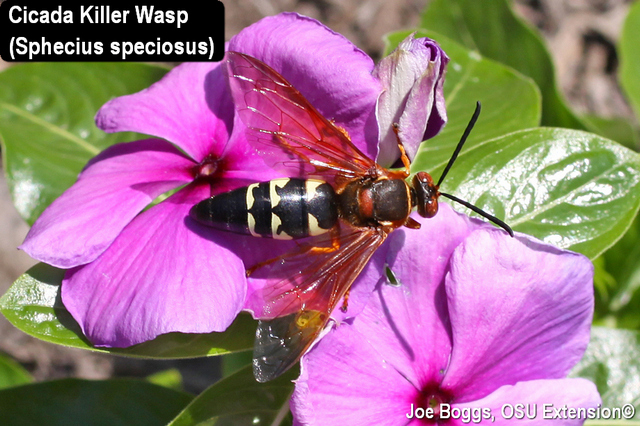 Stink bug hunters dig their burrows almost exclusively in sand which is why they are grouped within the Sand Wasp tribe, Bembicini.  They are fast diggers and look like tiny dogs shoveling sand with their front legs backward between their hind legs.  A close examination will reveal that their first and second pairs of legs are slightly curved inward to support digging as well as grasping their prey. 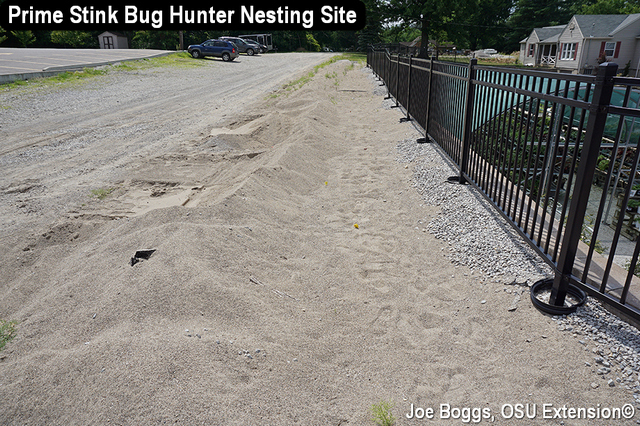 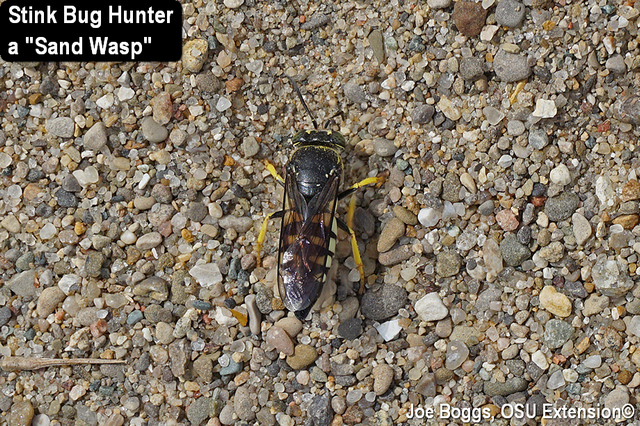 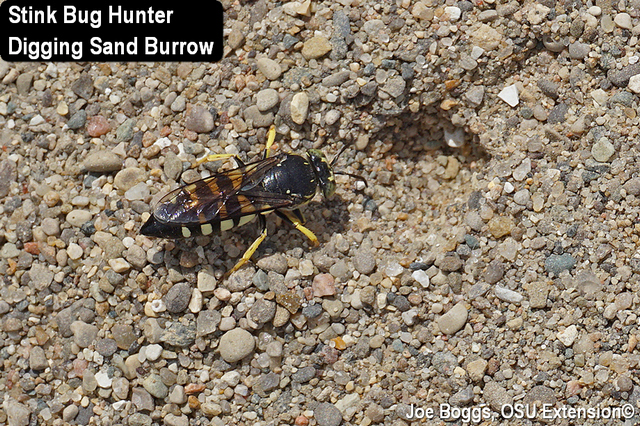 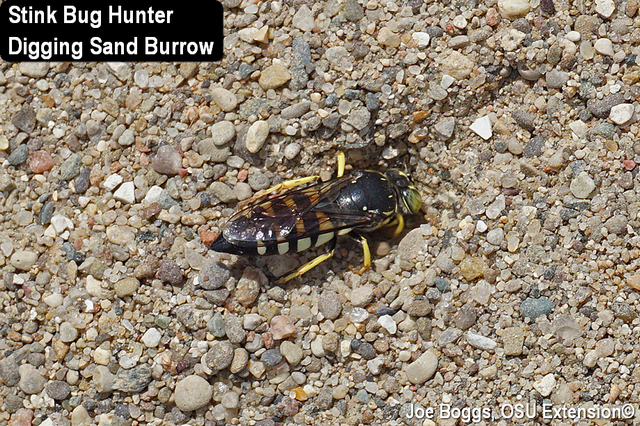 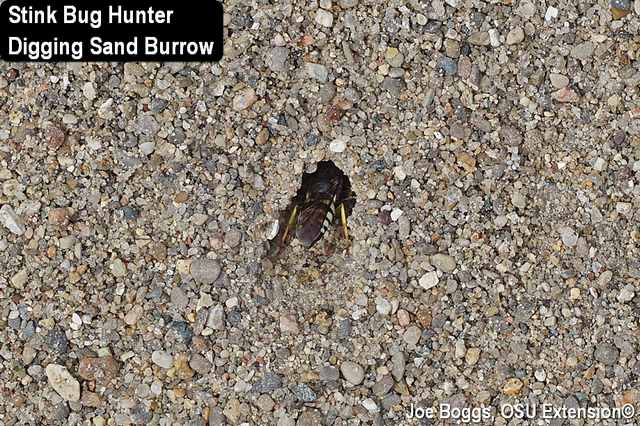 Stink bug hunter females may attack different types of True Bugs (suborder Heteroptera) including leaf-footed bugs (family Coreidae).  However, it's their reliable predilection for stink bugs (family Pentatomidae) that makes them such an important enemy of BMSB.

The females tend to select stink bug nymphs, possibly owing to their smaller size compared to the adults.  She grabs and stings the nymph to paralyze it, then she carries her prize back to her burrow and stuffs it inside. 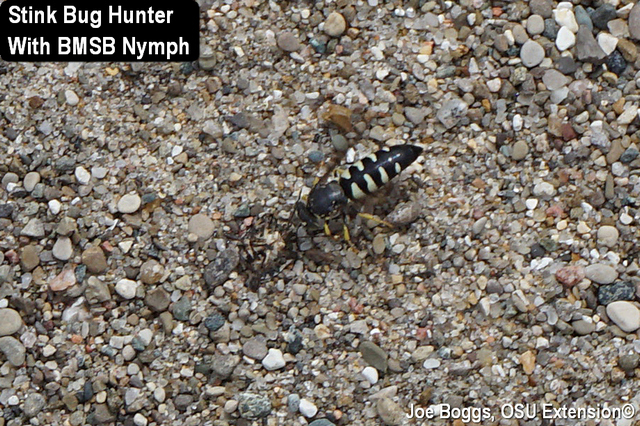 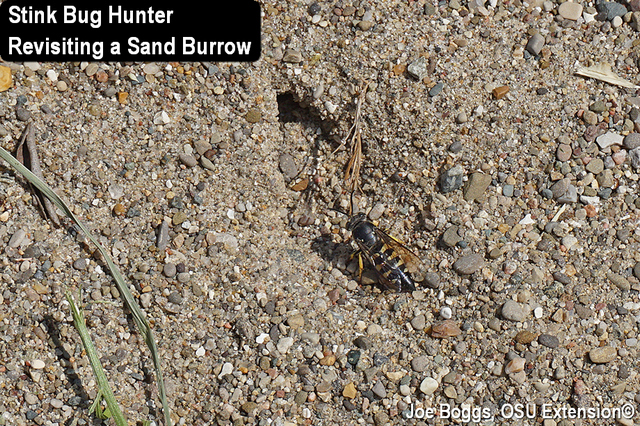 After she has provisioned her burrow with several helpless nymphs, she lays a single egg, leaves the burrow, and seals the entrance.  It's an ingenious way to get around the lack of refrigeration.  The immobilized nymphs remain alive (perhaps horribly aware?) to serve as fresh meat for the soon-to-hatch, grub-like wasp larva. 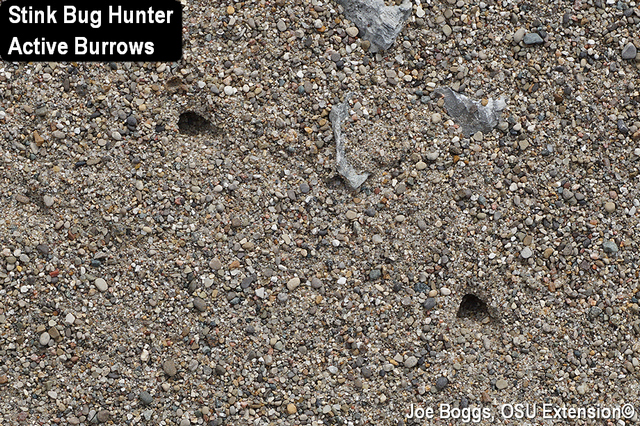 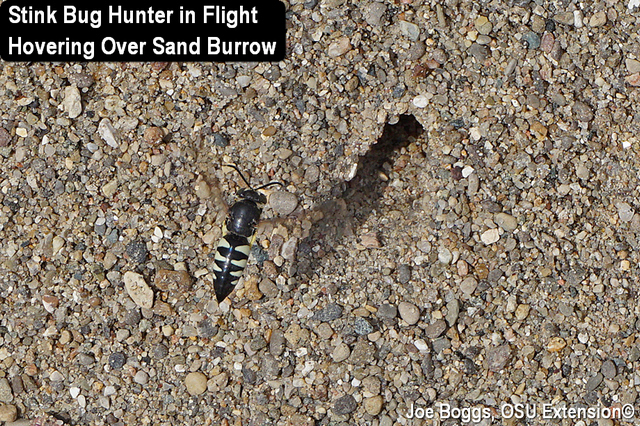 According to the literature, each female digs 5 – 6 burrows during her lifetime.  Each tunnel has 1 – 3 cells and each of the cells contains between 4 and 14 bug nymphs.

The wasp larvae consume their entire cache of paralyzed bug nymphs during their development.  As the larvae entire their final instar stage, they construct cocoons by gluing together bits of sand.  It’s unclear whether or not the stink bug hunters have one or two generations per season in Ohio.  The literature notes they have two generations in their southern range but only one generation in Pennsylvania.  Based on my own observations, I’m beginning to believe we may have two generations in southern Ohio. 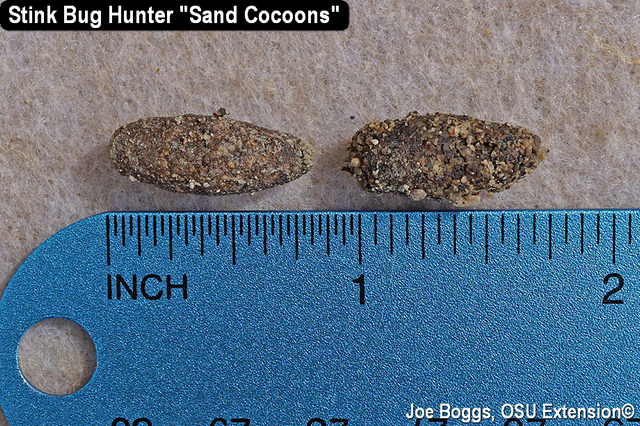 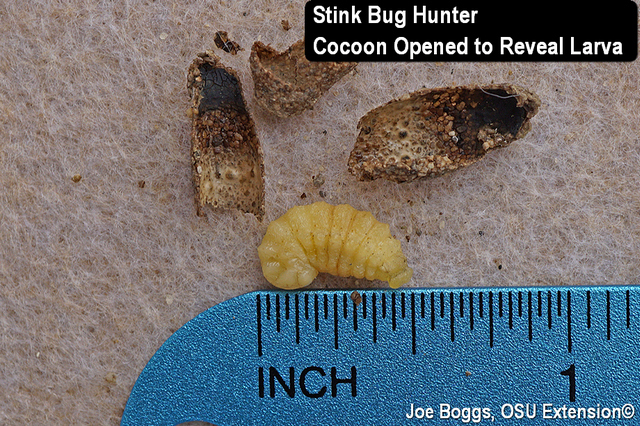 A survey of native biocontrol agents of BMSB conducted in 2011 by Penn State researchers (see “Selected References” below) in fruit orchards and surrounding habitats revealed that 96% of the stink bugs found in stink bug hunter’s burrows were BMSB nymphs.  While the survey was conducted during a "peak year" in BMSB numbers in PA and locations with concentrated bug populations (orchards), the results still point to these sand wasps as being an important bio-ally.

What about the risk of getting stung?  Like cicada killers and the vast majority of solitary wasps, sand wasps were not aggressive.  In fact, I’ve strolled through stick bug hunter colonies to take pictures on several occasions without experiencing any type of threatening behavior despite my close-in photo shoots.

Attracting these wasps to landscapes may be an important method for decreasing BMSB populations as well as several other stink bugs.  The adults feed on nectar; they are pollinators.  This behavior was on full display as I recently photographed Late-Flowering Thoroughwort (Eupatorium serotinum, family Asteraceae) [see the BYGL Alert, “Pollinator Plant of the Week: Eupatorium serotinum”].  Stink bug hunters were one of the most common wasps visiting the flowers. 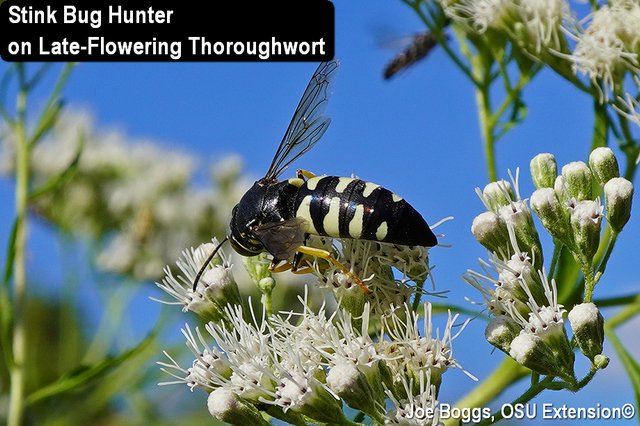 Adding "pollinator plants" to landscapes provides significant support for these and other bio-allies that can play a critical role in suppressing pests without the need to use insecticides.  "Butterfly Gardens" and "Pollinator Gardens" should be appreciated beyond their support of pollinators; they're also Pest Management Gardens. 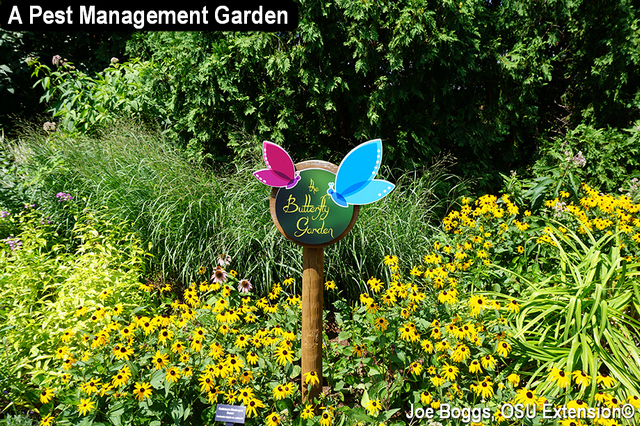