“Bagworm Season” is Wrapping Up but Bags Will Remain 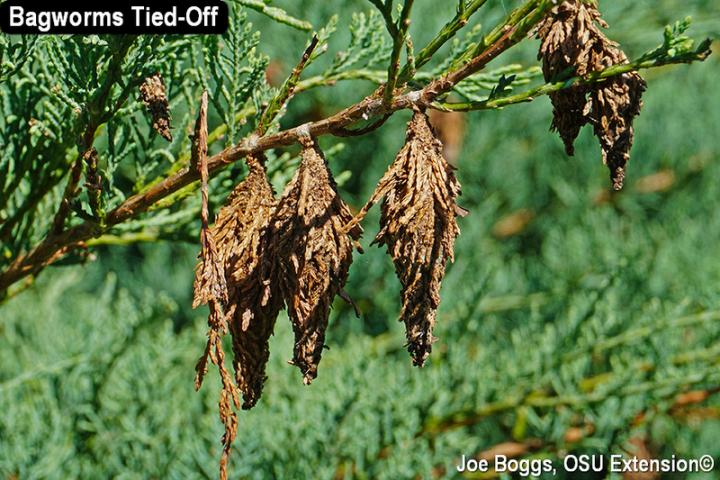 Common bagworms (Thyridopteryx ephemeraeformis, family Psychidae) are so-named because the native moth caterpillars live in silk bags festooned with plant debris.  It’s the perfect camouflage allowing them to remain undetected until their damage is revealed by their voracious appetites. 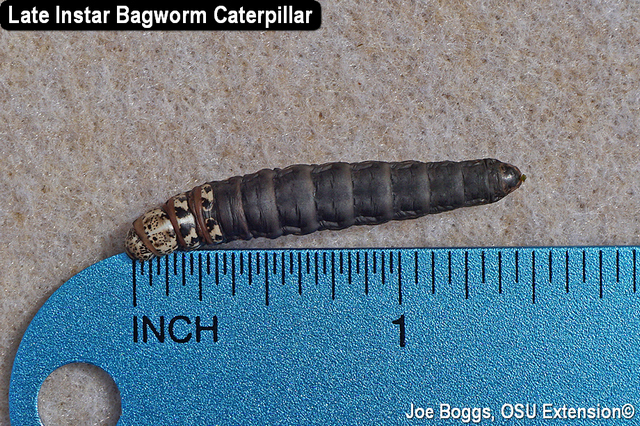 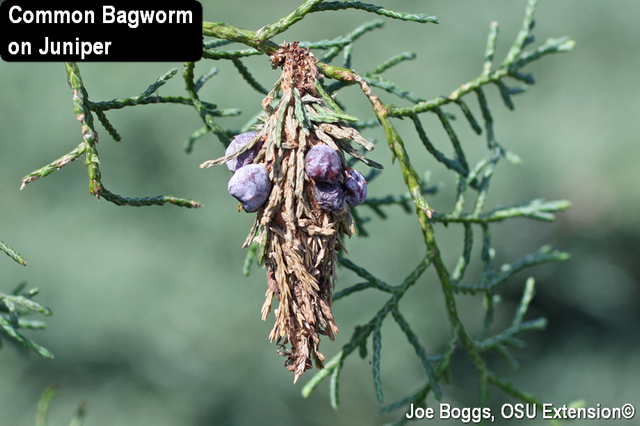 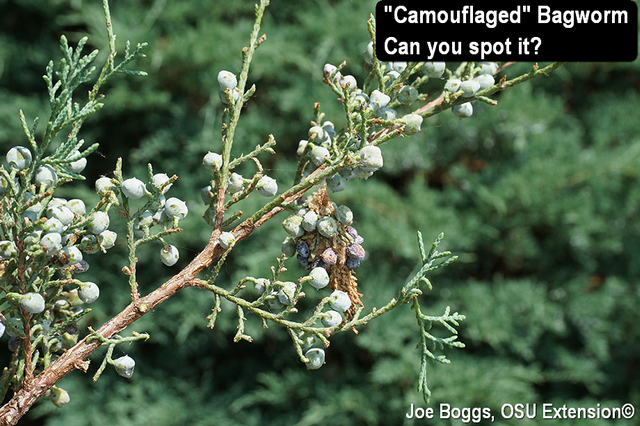 Bagworms were not widespread this season in Ohio.  High populations were scattered and highly localized.  It was common for bagworms to be confined to a single tree or group of shrubs in a landscape.  However, it’s important to locate and respond to infestations this fall because they can serve as a point source for future population expansions. 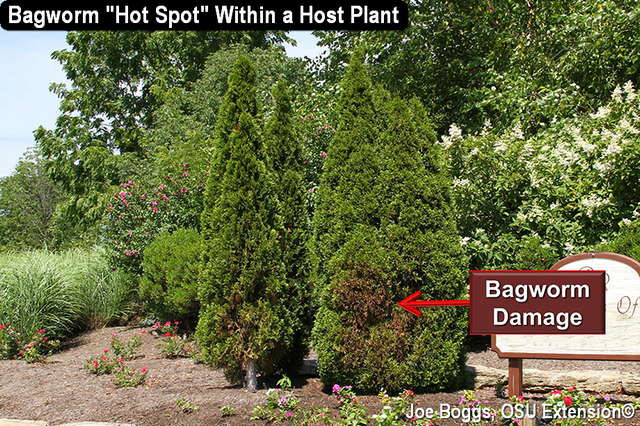 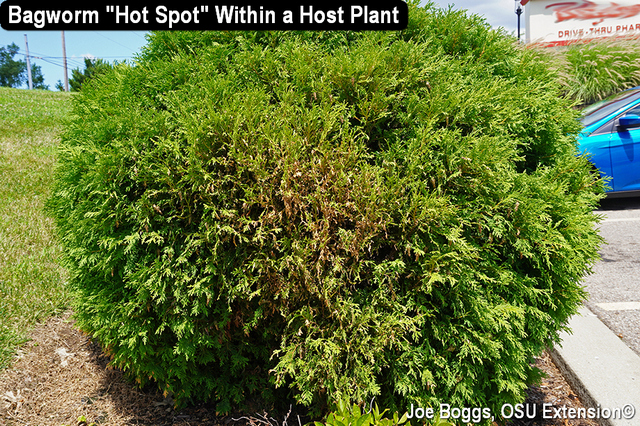 Bagworm moths have one generation per year with the “bagworm season” getting underway when overwintered eggs hatch in late May to early June in Ohio.  The season ends when caterpillars transition from life in a tote bag to life in a sleeping bag. 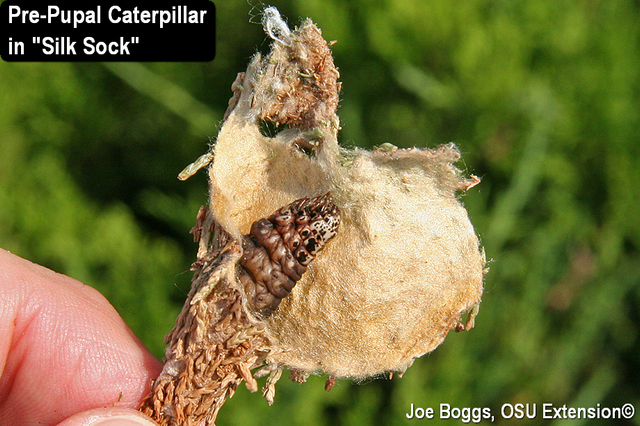 Their seasonal feeding damage ceases once the caterpillars tie silk to a twig or other anchorage points and then close up shop by tightly closing their bags to await pupation.  This is happening right now in the southwest part of the state. 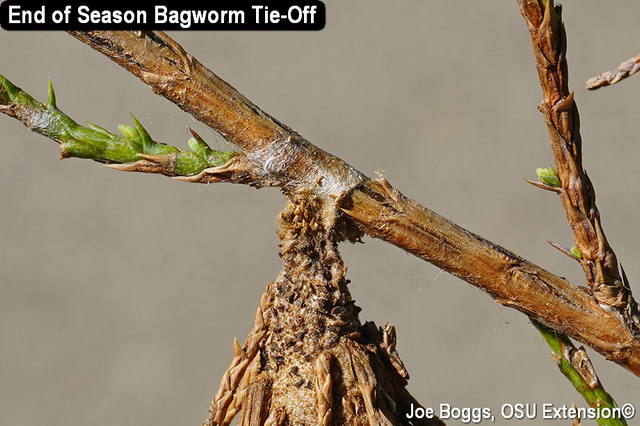 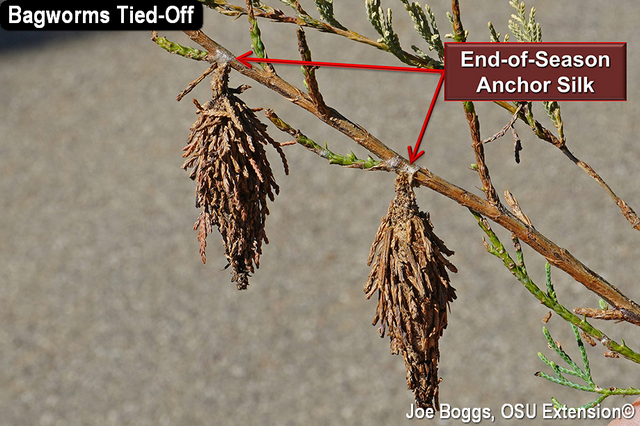 It’s now too late for insecticides to be effective.  However, it's prime time to deplete populations by plucking and destroying the bags containing quiescent caterpillars, pupae, and later dead females with live overwintering eggs.

Bagworms are summer pests; however, their bags remain visible throughout the fall, winter, and spring.  Indeed, old bags can linger for years. 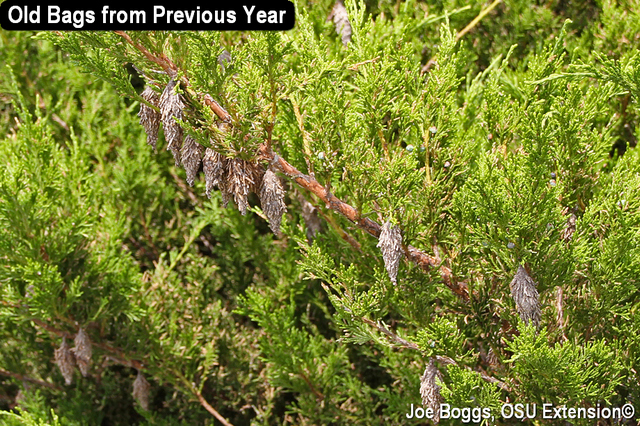 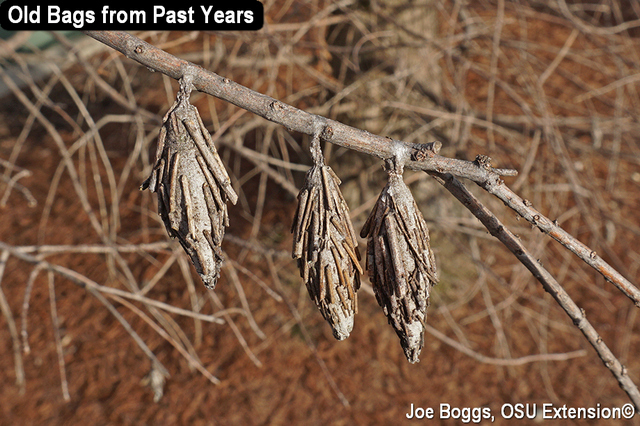 Keep in mind that if bagworms were targeted with a topical insecticide application this season, the bags may remain attached even though the caterpillars are dead.  It’s important to open a few bags to assess the efficacy of the application before assuming the insecticide was ineffective. 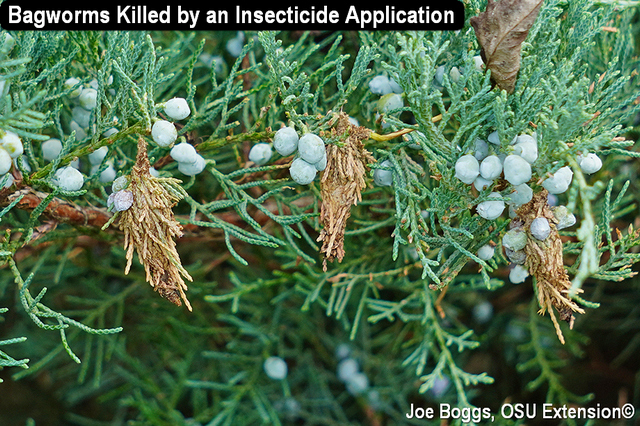 Life in a Silk Sock

Both male and female caterpillars spend their entire larval development inside their silk bags.  The bags have two openings at opposite ends.  The large upper opening is used by the caterpillars to poke their heads out to feed and enlarge their bag abodes. They avoid tumbling from their plant hosts by anchoring their bags to their plant hosts with a small bit of silk. 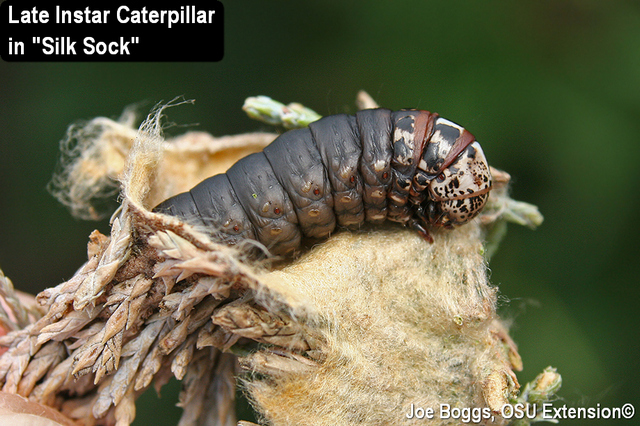 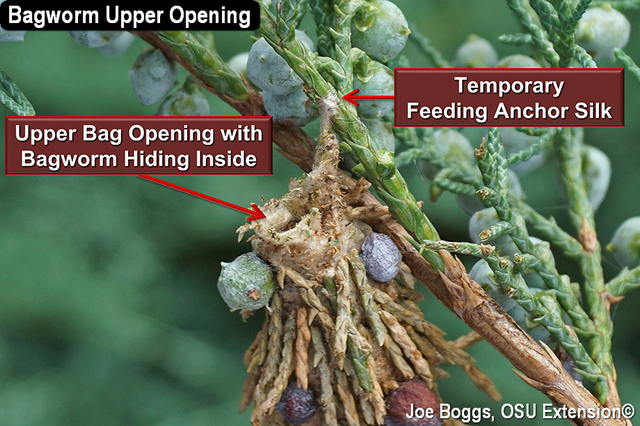 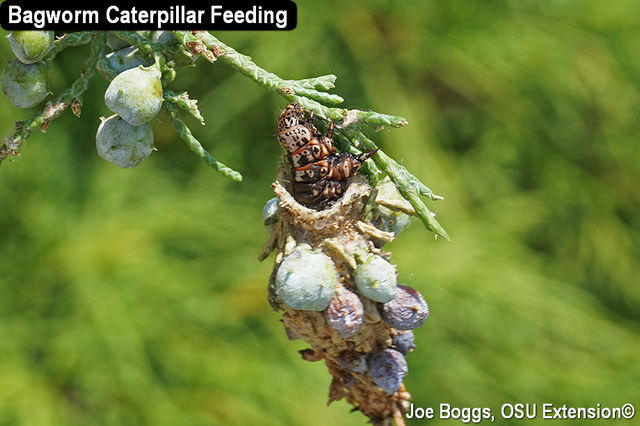 The male and female caterpillars take very different paths in their development.  The females never develop into moth-like insects.  They remain inside their bags which are much larger than the bags produced by the males. 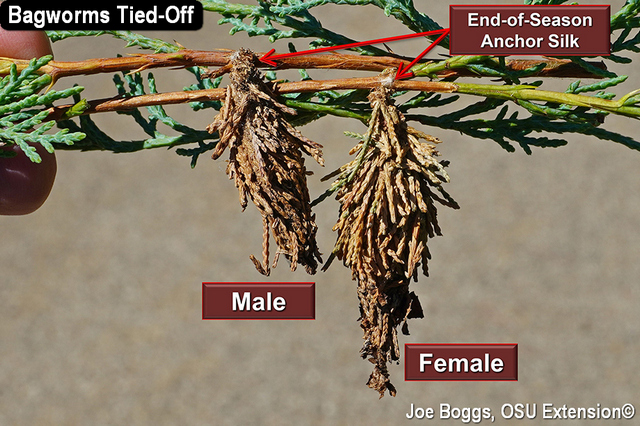 The females develop into something that looks more worm-like than moth-like.  The mature bagworm female moths have no wings, no apparent mouthparts, no antennae, and three pairs of very short, dysfunctional legs.  Her abdomen terminates in an ovipositor (egg-laying structure) used for depositing and packing her eggs into her pupal case.  Since the females don’t leave their bags, they emit a chemical attractant (sex pheromone) that draws in the males. 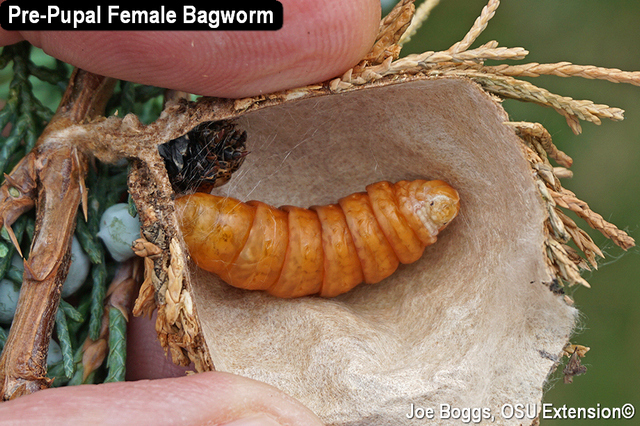 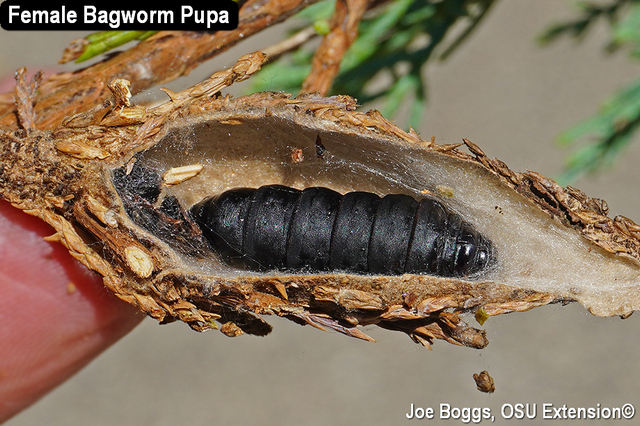 Male caterpillars, pupae, and bags are much smaller compared to females.  Male pupae look much like other moth pupae and the resulting male moths have wings and are capable fliers.  Their wings lack scales causing them to superficially resemble dark-colored flies. 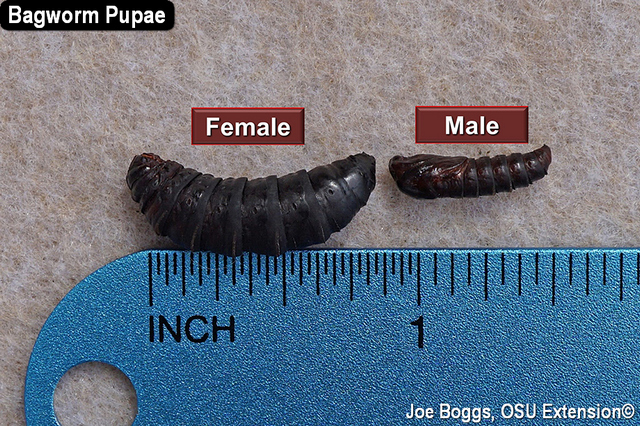 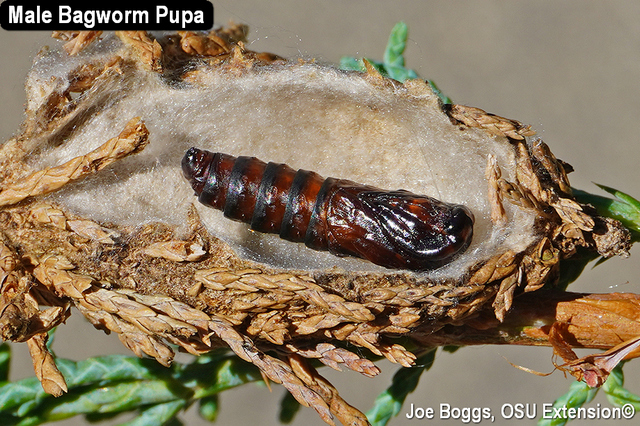 The males also have large antennae used to detect and track the l'amour eau de parfum wafting from the female bags.  Male bags will soon be identifiable by pupal skins sticking out of the bottom of the bags. 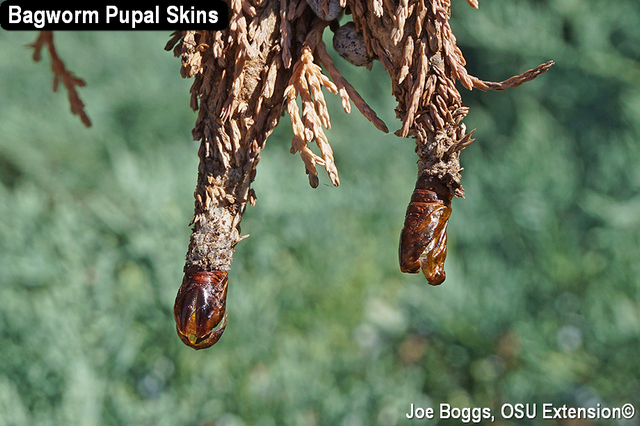 Mating occurs with the females remaining in their bags.  Soon after mating, the female produces overwintering eggs that are laid snug inside of their mother's old bag.  Each female is capable of producing 500 – 1,000 eggs which explains why populations can build rapidly. 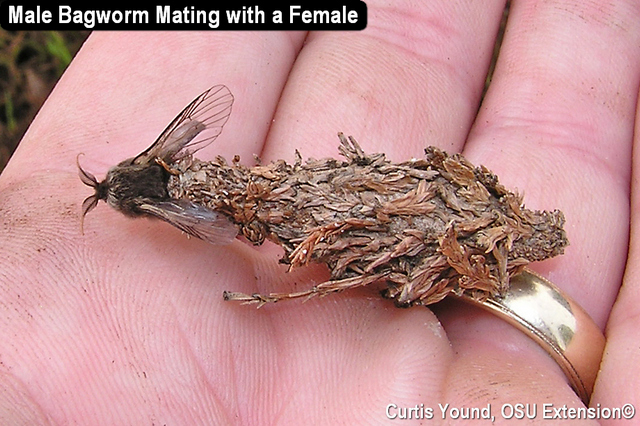 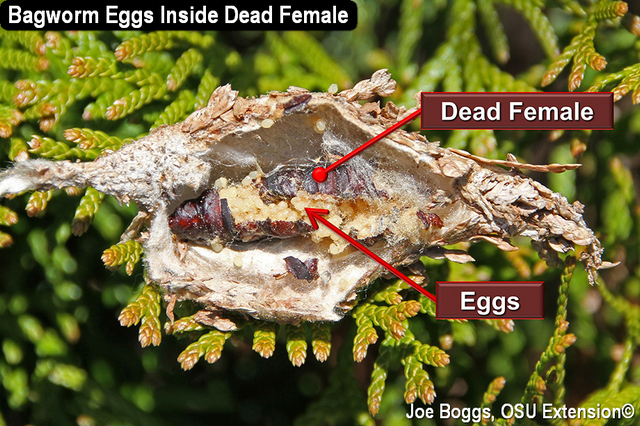 Look Now for the Future

Although common bagworms are sometimes called “evergreen bagworms, it's a common misconception that bagworms only eat evergreens.  In fact, the caterpillars can feed on over 130 different species of plants including a wide range of deciduous trees and shrubs. 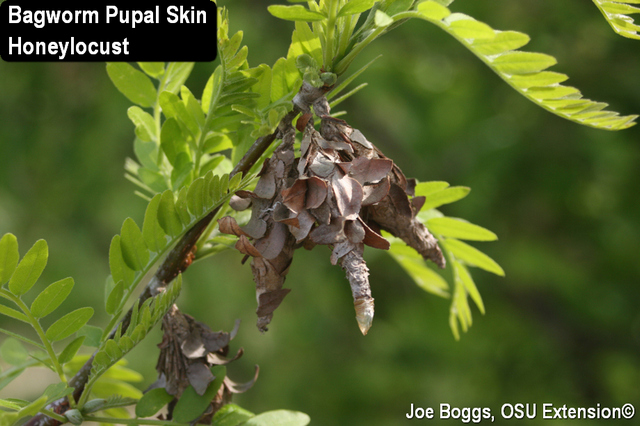 Feeding symptoms on deciduous hosts are sometimes overlooked or mistaken for damage caused by other general defoliators.  However, overlooking bagworms on deciduous trees and shrubs allows the plants to become reservoirs for infestations to spread to neighboring host plants.  Overlooking only a few females in a landscape can result in thousands of new bagworms plaguing the landscape next season. 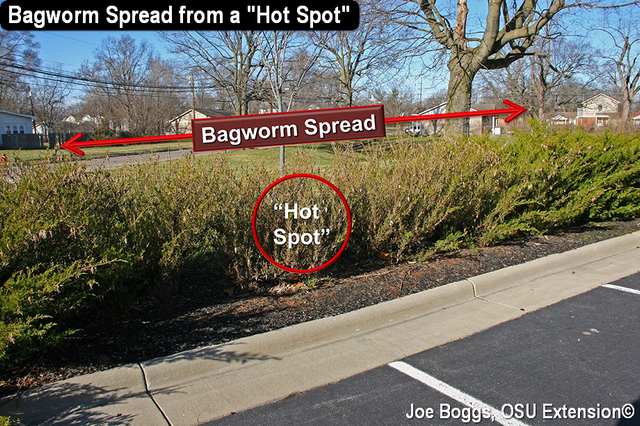 Once bagworms close up shop for the season, the only control option that remains effective is to pluck off and destroy the bags which will eliminate the females and later the overwintering eggs.  This control method remains effective throughout the fall, winter, and spring.  Bags should be destroyed rather than dropped to the ground because eggs will still hatch from bags on the ground. 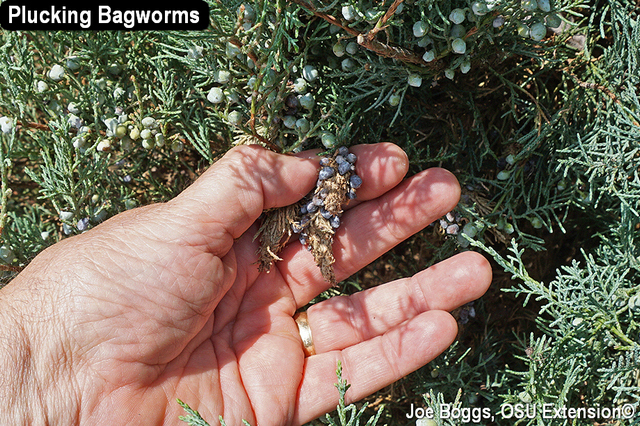 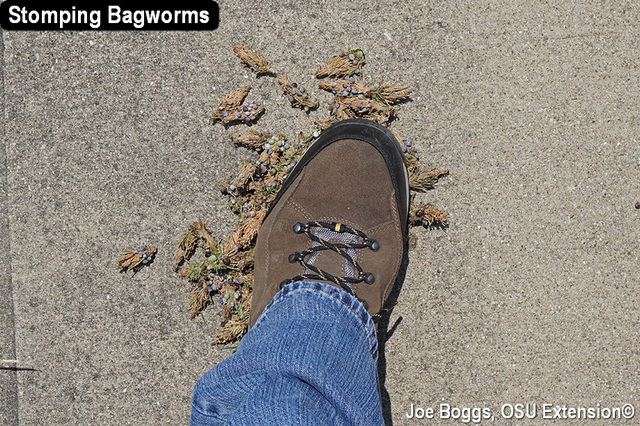 Since females don't fly, early bagworm infestations are often concentrated on a few plants; sometimes just a single plant.  This is why it's important to concentrate your bagworm-plucking efforts on point-source plants, so those plants don't support a much wider infestation next season.  It’s also important to look around to find bagworms attached to structures. 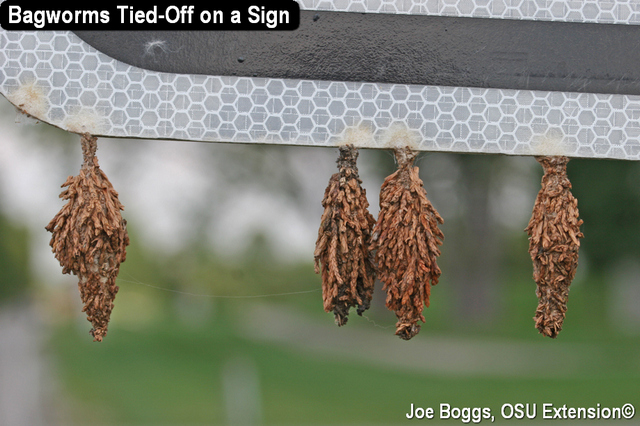