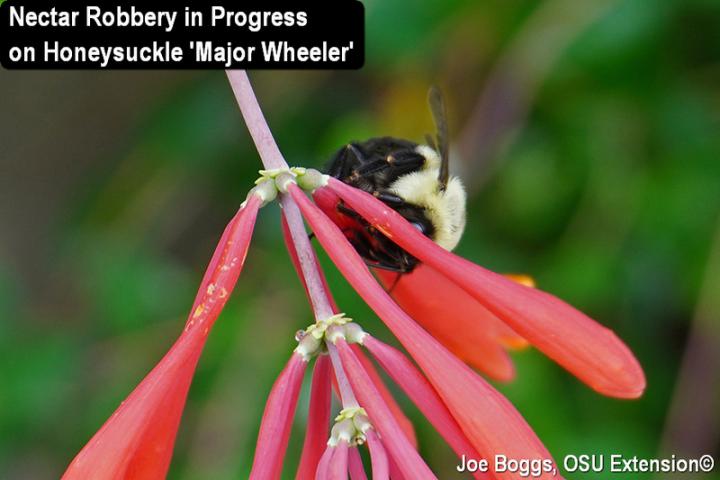 I could give many facts, showing how anxious bees are to save time; for instance, their habit of cutting holes and sucking the nectar at the bases of certain flowers, which they can, with a very little more trouble, enter by the mouth.  Charles Darwin, On the Origin of Species, 1st Edition

Larcenous bees chew holes at the base of tubular floral corollas to practice nectar robbery.  Darwin wasn’t the first to write about it.  According to the literature, this criminal behavior has been known since 1793 when the German naturalist Christian Sprengel first reported observing bumblebees (Bombus spp.) puncturing flowers with their mandibles. 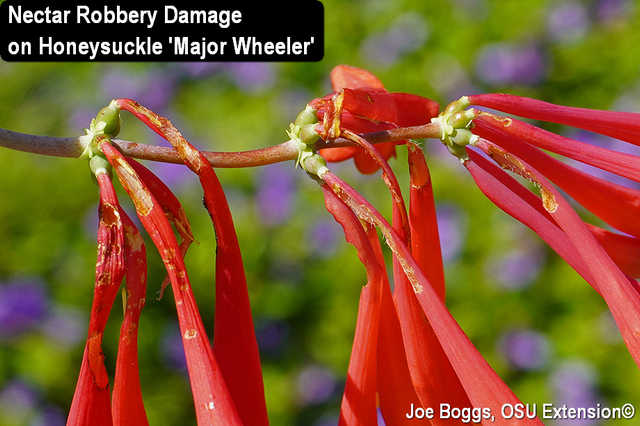 The plunderous behavior was new to me when I first observed the bases of corollas on the native honeysuckle, Lonicera sempervirens 'Major Wheeler' that had been ripped open.  I first thought that a generalist like Japanese beetles (Popillia japonica) had produced the damage, and the bevy of hymenopterans that I observed were secondary plunderers. 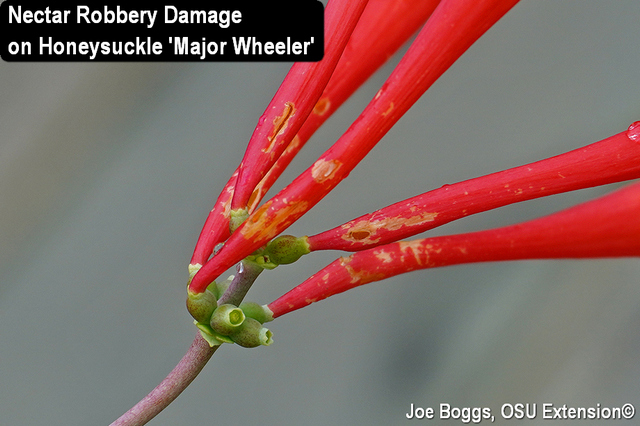 Of course, I soon learned that the bees and perhaps some of the wasps that I observed were in fact practicing some breaking and entering.  Many were primary nectar robbers.

I’ve included a range of scientific papers (see Selected References) aimed at untangling this peculiar interaction between plants and insects that are usually honored as plant pollinators.  The subjects and breadth of the research are evident in many of the self-explanatory titles.  Of course, late-night reading may replace sleeping aids.

The terminology used to describe criminal interactions between flowers and larcenous insects was the subject of a paper published in 1980.  According to the paper, “nectar thievery” should be reserved for another free-loading lifestyle where an insect such as certain moths and butterflies use their long proboscis coupled with long legs to extract nectar without coming into contact with pollen. 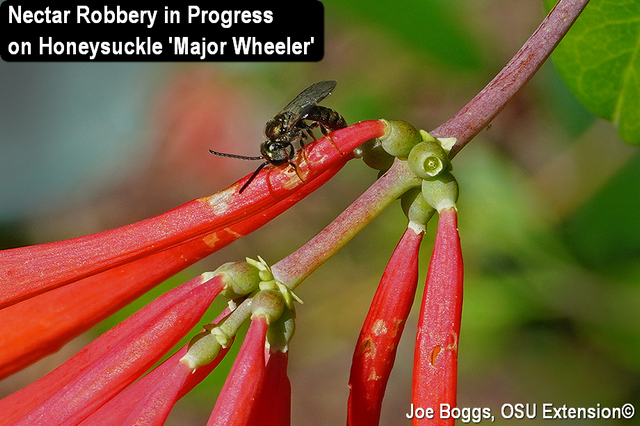 “Nectar robbery” describes the practice of ripping open the flower to expose the sweet goods inside.  A “primary nectar robber” does the ripping and some sipping while “secondary nectar robbers” simply take advantage of the openings to do their own sipping of exposed nectar. 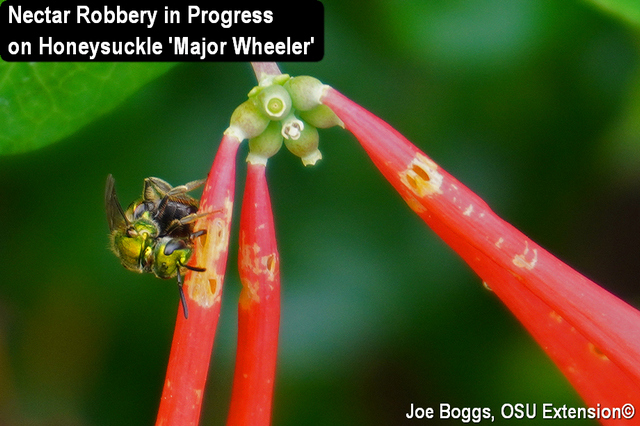 Nectar robbers are most often bees.  However, the literature notes that certain wasps may also get in on the act.  The challenge with catching the actual culprit is that once the corolla is ripped open, secondary perpetrators may take advantage of the exposed nectar bounty. 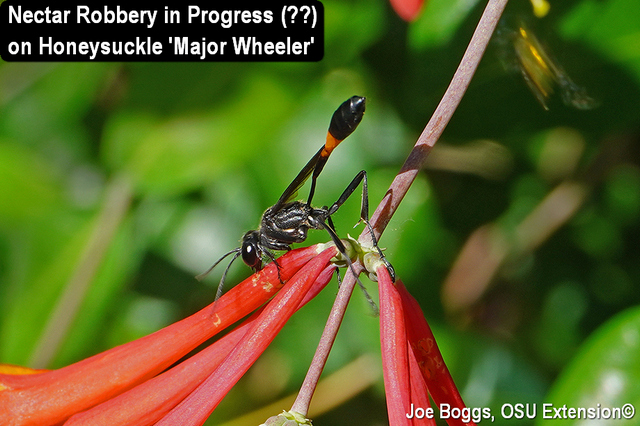 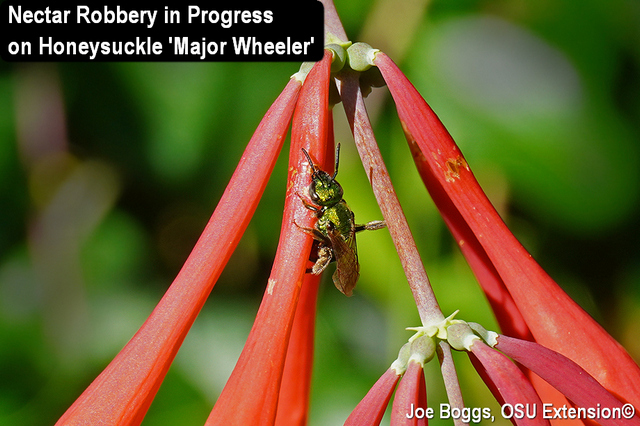 Long-tongued bees have the necessary equipment to penetrate deep into funnel-shaped flowers to extract nectar.  Short-tongued bees come up short, so they just chew holes at the base of the floral corolla and use their tiny tongues to lap up the nectar.  Indeed, the short-tongued bumblebee, Bombus terrestris, is frequently cited for nectar robbery. 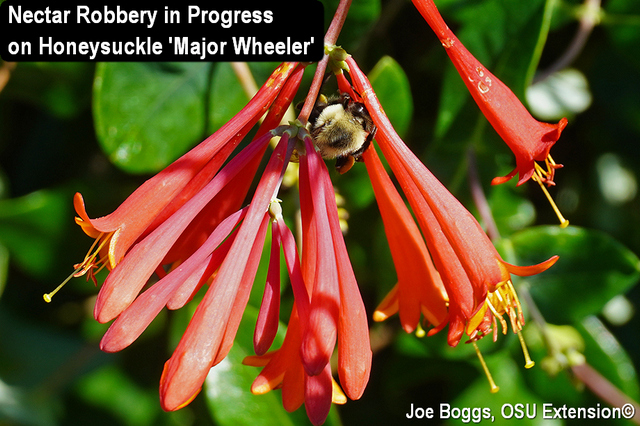 Western honey bees (Apis mellifera) are considered long-tongued.  So, the long-tongued vs. short-tongue logic would preclude honey bees from appearing in a line-up of nectar robbers.  However, this doesn’t explain a recent observation I made with honey bees on fragrant Hosta, Hosta plantaginea. 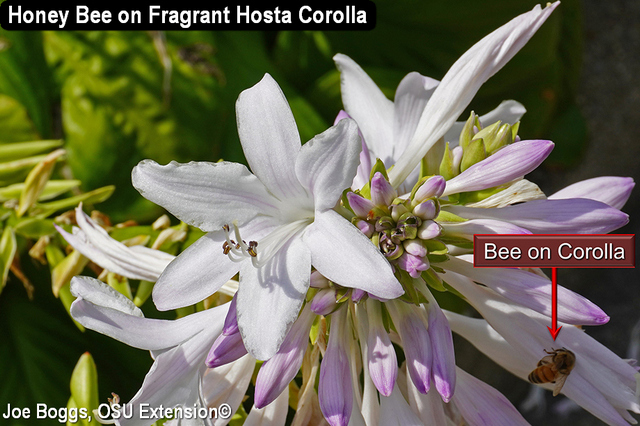 The Hosta flowers were being visited by large numbers of honey bees; I observed few bumblebees or other hymenopterans.  I waited patiently with my camera hoping to capture honey bees crawling in and out of the bell-shaped flowers.  However, the honey bees focused their attention on the base of the floral corollas.  I didn’t spot a single honey bee crawling into the flowers. 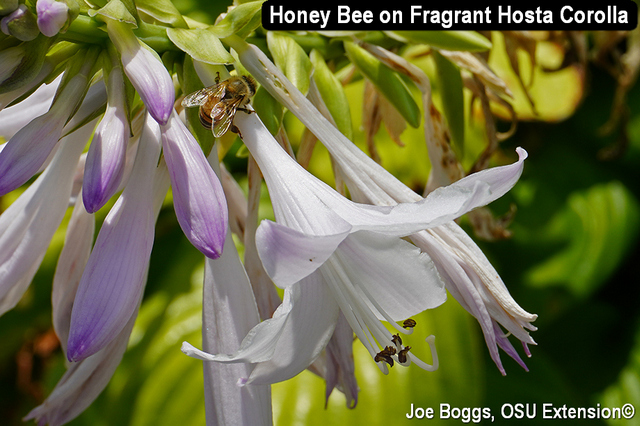 A close examination revealed longitudinal slits cut into the corollas.  Believing the honey bees were secondary nectar robbers, I set up a stakeout to snap photos of the primary perpetrator(s).  However, I failed to spot a known nectar robber working over the base of the flowers.  So, I began to pay closer attention to the honey bees. 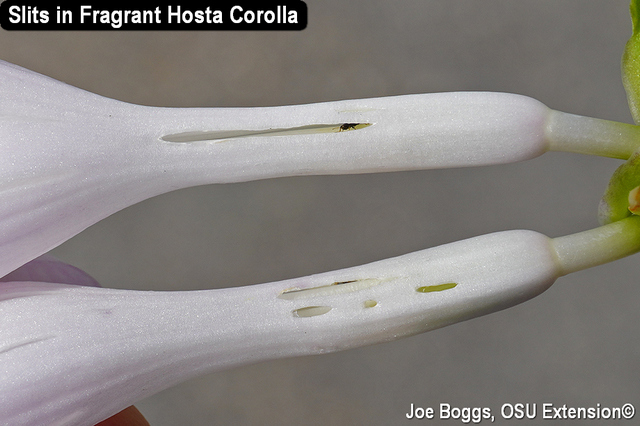 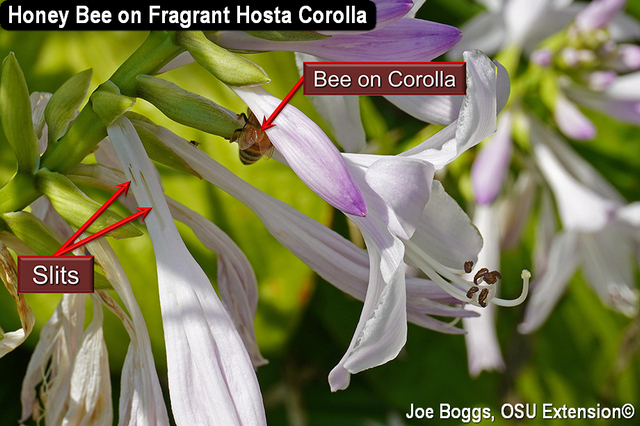 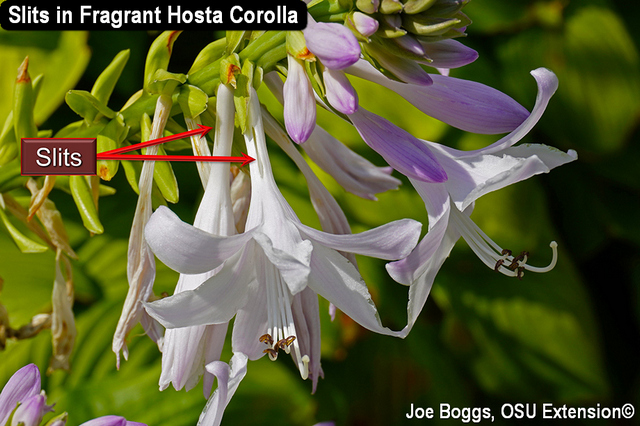 First, I kept my eyes on several corollas with no slits.  The slits only appeared on those visited by a honey bee.  Next, I closely observed several honey bees as they grasped onto a floral corolla.  Their heads were cocked slightly sideways and were rocked up and down as the bees moved along the corollas. 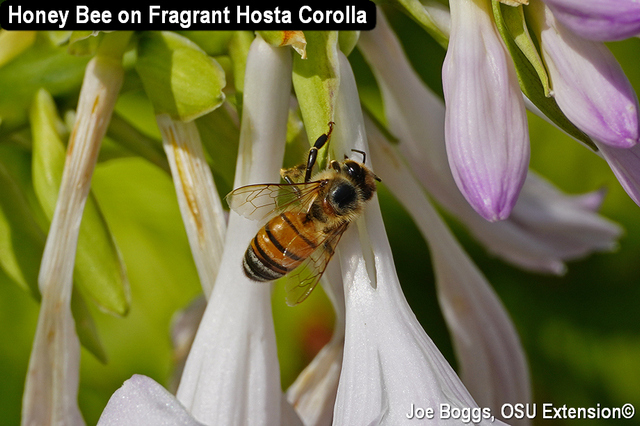 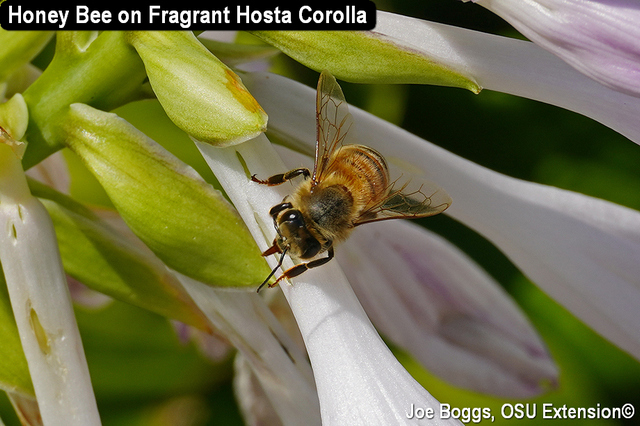 Honey bees have sharp-edged spatula-shaped mandibles.  Various online sources note the shape of the mandibles helps them to shape and smooth wax.  However, I believe that I observed honeybees cocking their heads slightly sideways to use a sharp-edged mandible like a can opener.  This would explain the shape of the resulting longitudinal slits in the corollas.  I found no ragged-edge holes chewed into the corollas.

I believe the honey bees were behaving as primary nectar robbers.  Of course, I remain open to the possibility my conclusion is incorrect as I could find no reports of this behavior in the literature. 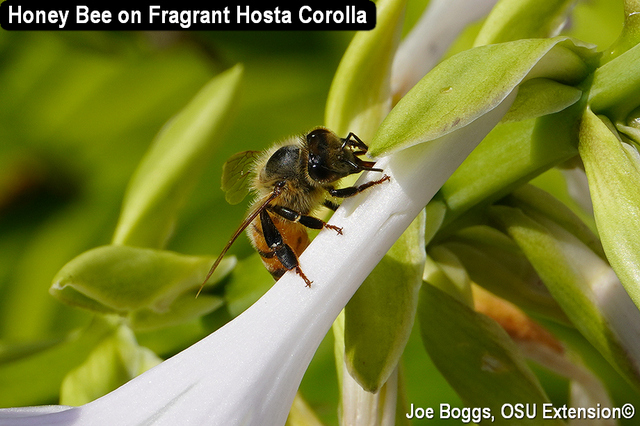 On the other hand, I have no other explanation for slits only appearing on corollas visited by honey bees.  No other nectar robbers visited between my before-and-after observations.  Indeed, few known nectar robbers such as bumblebees were evident over the entire planting.

On a side note, a paper published in 2008 showed that nectar robbing behavior by the bumblebee, B. terrestris, can spread through a population.  The knowledge wasn’t passed directly from one bee to the next.  Rather, the bumblebees that behaved as secondary robbers by sipping from holes created by a primary robber sister would then become primary robbers.  They had sipped the forbidden nectar of knowledge, so to speak.

Perhaps this same method of transmission of an acquired foraging technique was occurring with the honey bees I observed.  Or, maybe the honey bees just passed the information along as they sat around in their hive discussing their latest adventures.

Kohl, P.L., and I. Steffan‐Dewenter. 2022. Nectar robbing rather than pollinator availability constrains reproduction of a bee‐flowered plant at high elevations. Ecosphere, 13(6), p.4077.