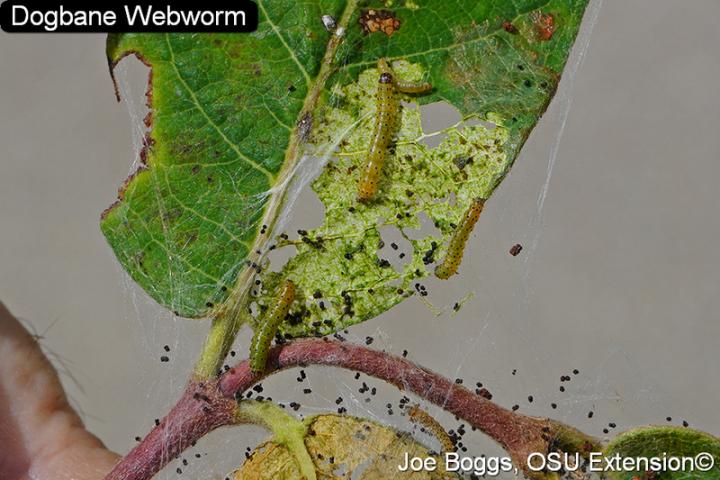 When I first saw the webbed nests of the Dogbane Webworm (Saucrobotys futilalis, family Crambidae) on Hemp Dogbane (Apocynum cannabinum, family Apocynaceae), I thought the culprits were fall webworms (Hyphantria cunea, family Erebidae).  After all, this native moth has a very wide host range and it’s not uncommon to find their nests on herbaceous perennials. 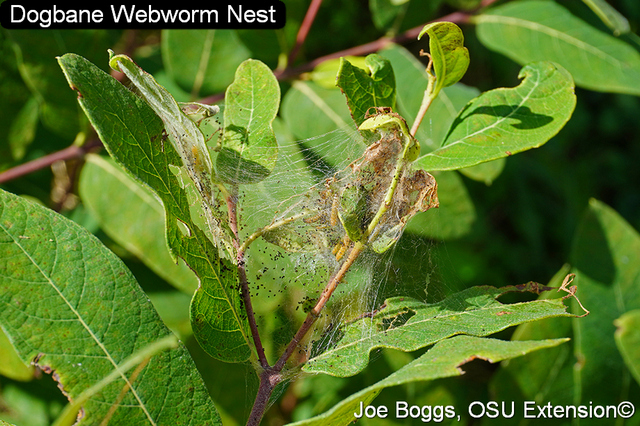 However, I had never seen fall webworms on any member of the Apocynaceae family.  Presumably, the caterpillars cannot handle the alkaloid chemical defenses of plants in this family.  Family members also include milkweeds and other plants that ooze milky sap ladened with poisonous alkaloids.

A. cannabinum is the representative species for the Apocynaceae family which is why it’s called the “dogbane family.”  Indeed, Apocynum translates to "poisonous to dogs," or "dog killer." 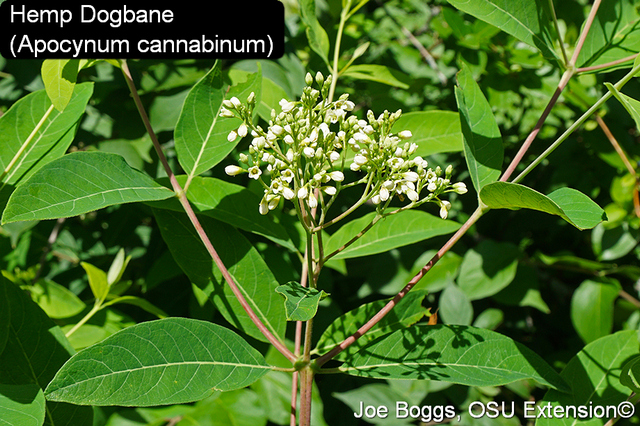 Sap from the plant is reported to have been used against ravenous feral dogs.  However, it apparently does not affect werewolves; that's Wolfsbane (Aconitum spp., family Ranunculaceae).  Yet another example of the value of knowing plant taxonomy and being able to make an accurate plant ID … your life may depend on it.

The first clue to the true identity of nest-making caterpillars on dogbane is the host. Dogbane webworms target their namesake hosts, which include Hemp Dogbane (A. cannabinum) and Spreading Dogbane (A. androsaemifolium).  Online references report that the caterpillars may also feed on milkweeds (Asclepias spp.) including Butterflyweed (A. tuberosa) although I’ve never observed the caterpillars on any plant other than dogbane.

Dogbane webworms produce two types of nests. The caterpillars may use silk to wrap leaves together forming a tight cigar-like nest.  They may also use silk to envelop leaves producing nests that resemble those generated by fall webworms.  Regardless of the type of nests, the caterpillars feed primarily on the upper leaf surface consuming the upper epidermis and spongy mesophyll.  They typically leave the lower epidermis and leaf veins intact with the epidermis turning brown. 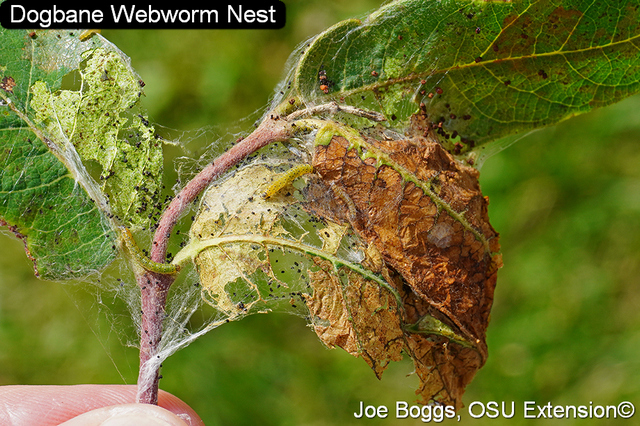 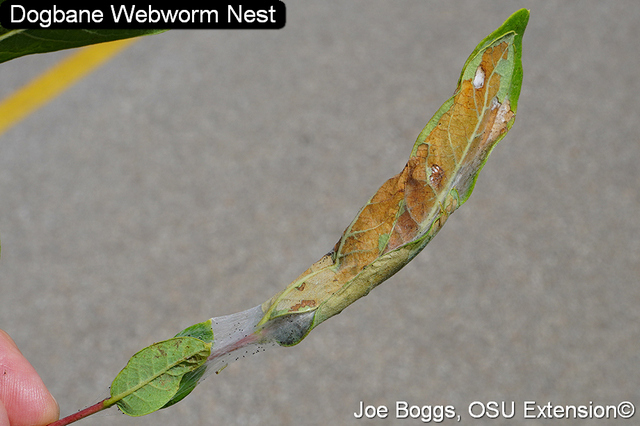 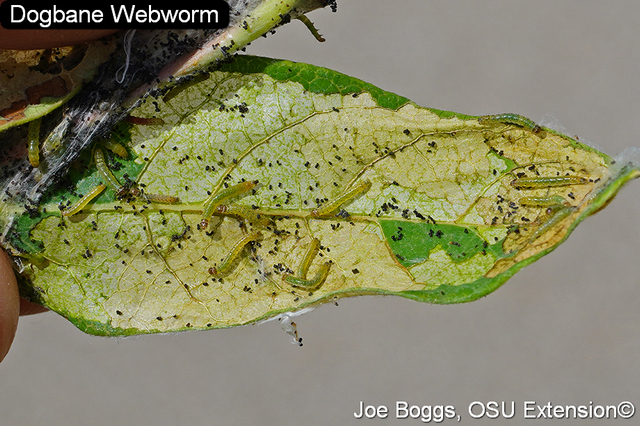 The caterpillars develop through five instar stages.  Unlike other insects that feed on members of the dogbane family, early instar dogbane caterpillars do not incorporate the alkaloid toxins derived from their host into their flesh to ward off predators.  Instead, they depend on the protection of their communal nests with the silk strands imbued with droplets of a chemical deterrent to predators. 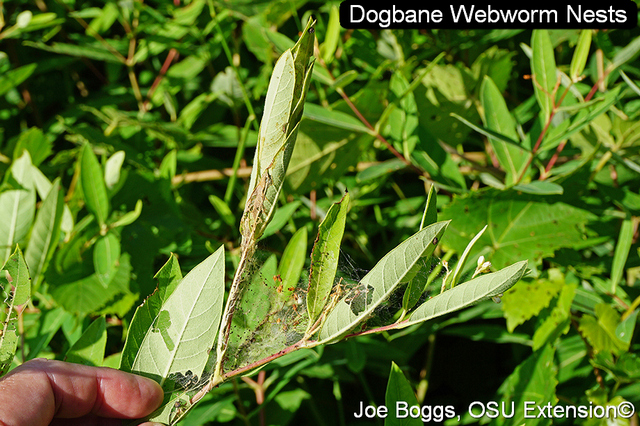 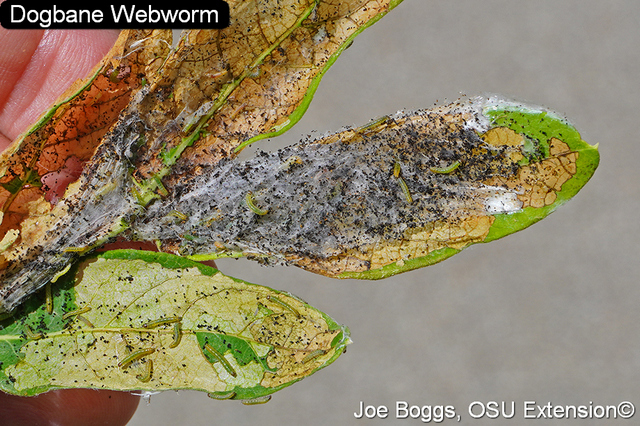 The caterpillars are also protected by “cryptic coloration.”  They change from yellow to green causing them to blend with their plant host.  Indeed, the caterpillars are almost translucent, so their green color motif is the chlorophyll-rich host plant leaf tissue they’ve consumed. 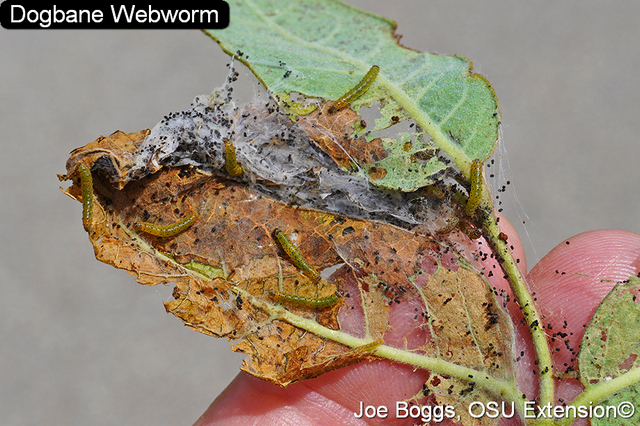 However, as the caterpillars eat themselves out of their silken house and home (literally!), they abandon their protective nests to forage further afield.  This generally occurs as they transition from the third to fourth instar stages.  Although the caterpillars become nomadic, they tend to stay together as they consume entire leaves.

The caterpillars change their defense strategy once they leave their protective nests.  When threatened by a predator, they regurgitate droplets of a nasty brew drawn from their dogbane host.  They direct their puke blobs toward their attackers, or they coat their bodies with an odious glaze.  Either way, predators like spiders release the presumably nasty-tasting caterpillars and skitter away probably spitting and cursing.

The late instar caterpillars advertise their noxious nature by gradually becoming reddish-orange with black spots.  This is called aposematic coloration and lets predators know the caterpillars are a puke threat. 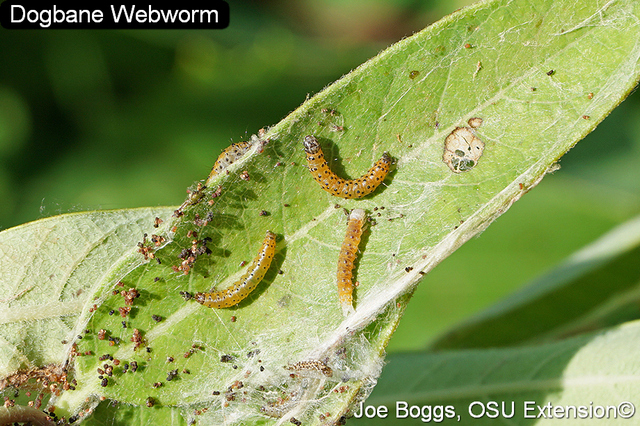 On a side note, you’ll find members of the Saucrobotys genus commonly referred to as “panic moths.”  I could not find an explanation for this common name.  Perhaps it has to do with the caterpillar’s defense strategy of puking when panicked.  Of course, my speculation could be influenced by memories of a childhood friend.