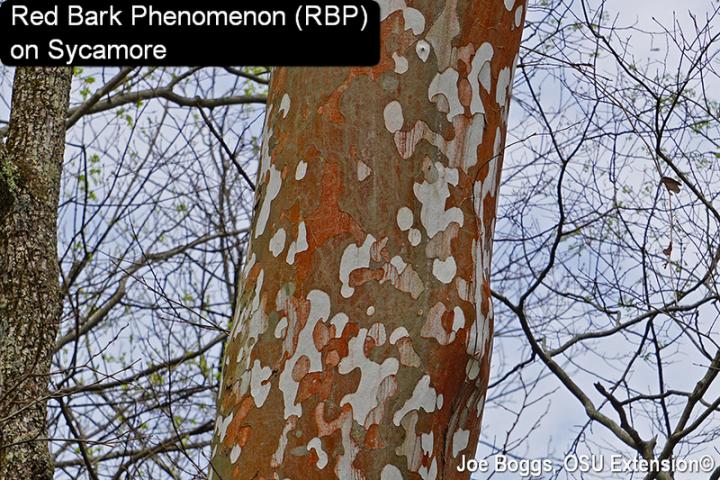 The so-called Red Bark Phenomenon (RBP) is marked by orangish-red to deep red staining on the bark.  Vertical streaks are common making trees look like they’re oozing blood.  It’s something to think about relative to Halloween “haunted trails.” 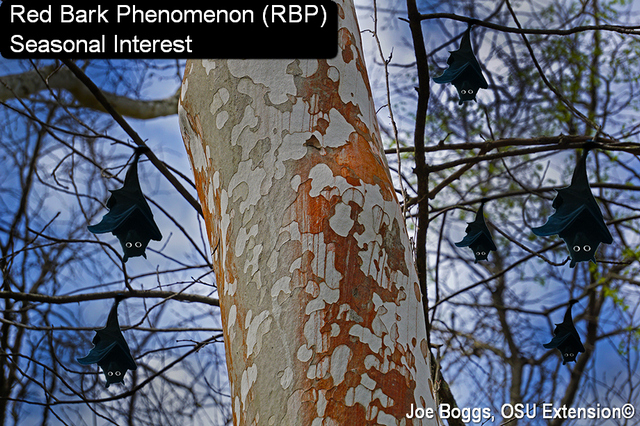 Thus far, I’ve only observed RBP in Ohio on various sized American sycamore (Platanus occidentalis) and London planetrees (Platanus x acerifolia).  However, the condition has been observed on a broader range of trees. 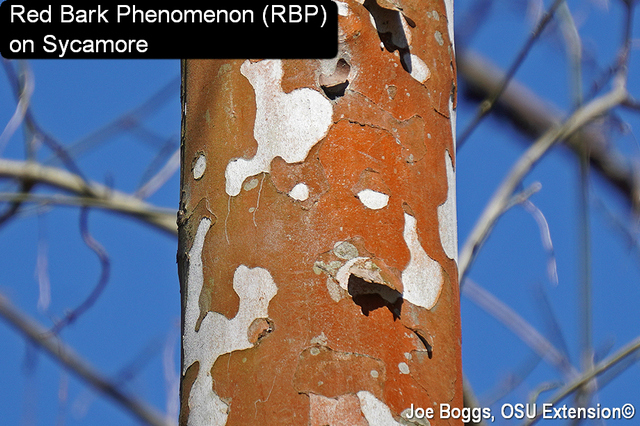 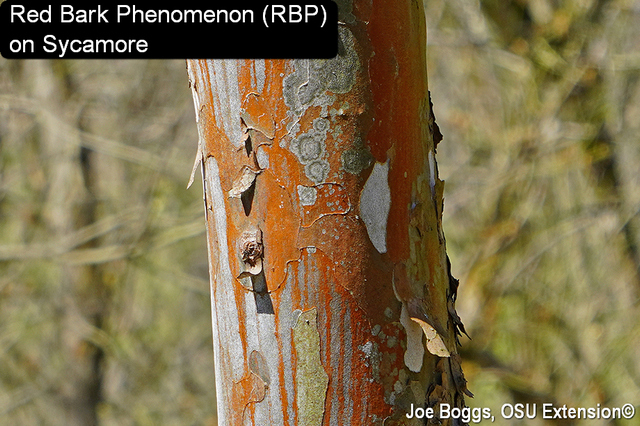 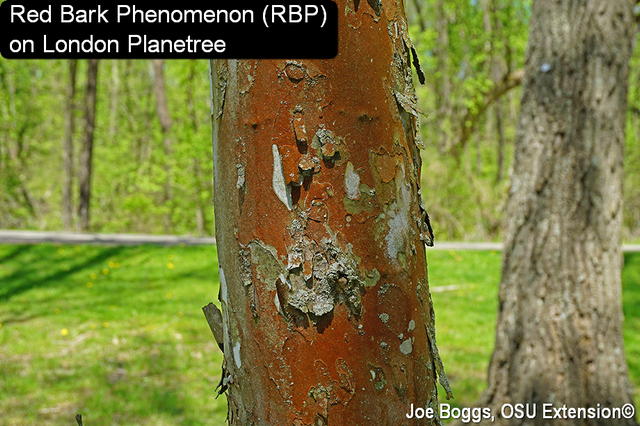 I first posted a BYGL Alert on RBP in Ohio in 2019 after observing the condition on sycamores and London planetrees in a Hamilton County park.  Another Alert was posted in 2020. 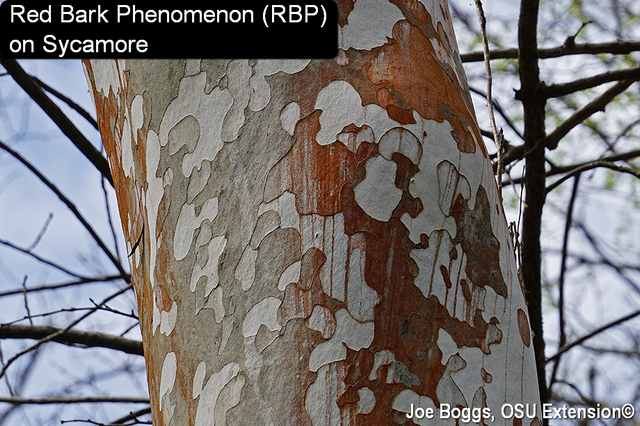 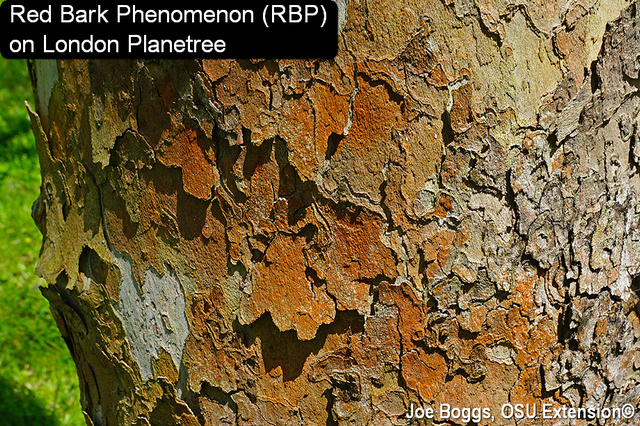 A recent trip with my wife on highways along the Ohio river revealed that RBP can continue to appear on American sycamore.  Unfortunately, every tree we saw was not directly accessible and could not be inspected or safely photographed even using drive-by shootings.  However, they were all easy to spot at highway speeds.

The reddening is a surface condition and does not appear to penetrate the bark or cambium.  There was no evidence of pathogenicity such as discoloration of the underlying tissue.  Although RBP can be obvious and dramatic, the condition does not threaten the health of affected trees.  Perhaps it even added some ornamental value (?). 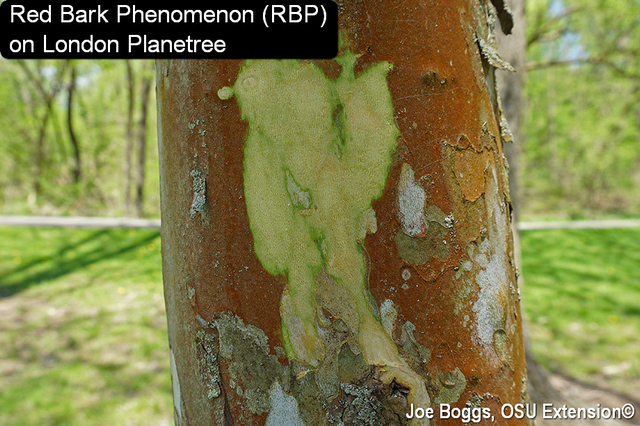 Monitoring previously affected trees revealed that RBP can remain evident on the same trees over multiple seasons although the reddening may vary dramatically in intensity.  This may be connected to variations in the establishment of the causal agent(s), or the effects of heavy rains, or both. 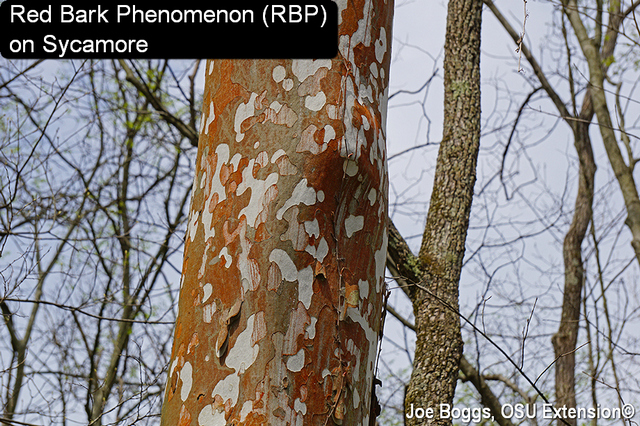 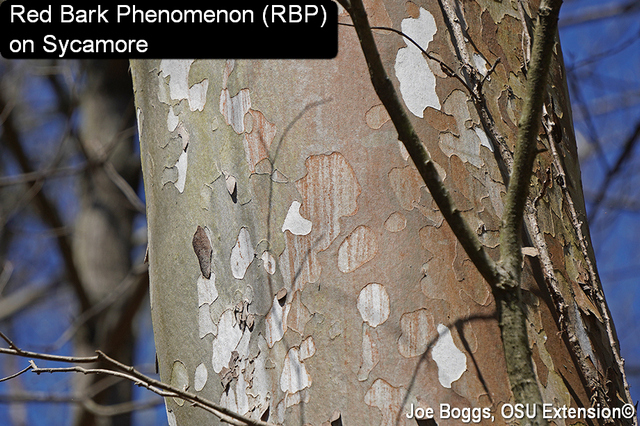 Another consistent observation has been the seemingly random distribution of the RBP among sycamores in forested locations.  Proximity to an affected tree appears to have little influence on whether or not trees showed symptoms. 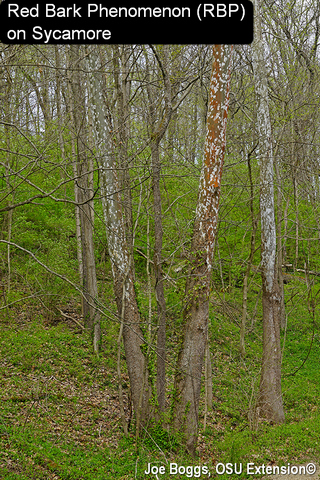 Finally, I have most commonly observed RBP on sycamores near water such as near streams or rivers.  The London planetrees were in a picnic area next to a large stream.  Of course, sycamore is a flood plain tree, so it's hard to say whether it's the trees or the RBP (or both) that's associated with water. 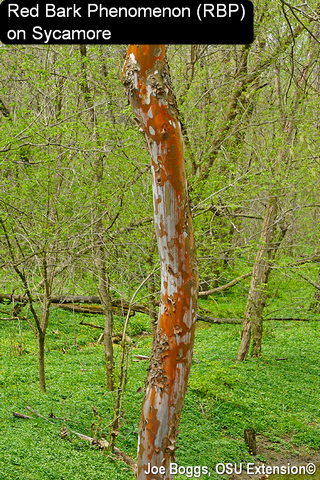 RBP is an unusual condition that was new to me, but it is not a new condition.  A technical report published in 2016 by Carole Cheah and DeWei Li with the Connecticut Agricultural Experiment Station, Valley Laboratory, presented detailed descriptions of RBP based on observations made in Connecticut from 2008-2010 (see Selected Literature below).  Indeed, they coined the term “Red Bark Phenomenon.”  Their report continues to be the most thorough overview that I’ve found on the Web.  You can read their report by clicking the hotlink.

Cheah and Li reported that RBP had been observed in several New England States and their surveys in Connecticut revealed that the condition may be found on over 20 tree species including both conifers and hardwoods.  However, they did not report that RBP can occur on sycamores or London planetrees.

I asked readers of my 2020 BYGL Alert to send their locations and observations.  RBP was observed in Alabama; Indiana; Kentucky; Maryland; Michigan, Mississippi; Ohio; and Tennessee.  RBP was observed across Ohio, from north to south and east to west.

One disturbing report concerned a sycamore that was taken down by its owner because of its reddened bark.  The arborist who sent the sycamorecide report had been called to assist with clean-up and stump grinding.  Apparently, the owner had been convinced by a neighbor that the tree was diseased, and the affliction would spread to other trees in the area.

The vast majority of the reports generated from the 2020 Alert were of RBP on sycamores.  However, observations were also made of red bark on white oak (Quercus alba) and shagbark hickory (Carya ovata) in Ohio and on eastern white pine (Pinus strobus) in Michigan.

Cheah and Li tentatively identified the causal agent behind RBP as a filamentous green alga belonging to the genus, Trentepohlia.  Several members of this genus are known to produce large quantities of yellow, orange, and red carotenoids that mask the green of the chlorophyll.  The aerial or semi-aerial Trentepohlia algae are also commonly found growing as biofilms on bark as well as other vertical substrates.

Cheah and Li microscopically examined the alga associated with RBP and found its morphological and growth characteristics did not match with known Trentepohlia species.  So, they could not make an identification.  They even postulated the species is yet to be described.

Authors of a paper published in 2018 (Rindi et al.) identified aerial corticolous (live on bark) algae in a California state preserve.  However, their pictures and descriptions of the algae do not match with the biofilm I’ve observed on sycamore bark in Ohio.

So, the causal agent(s) of RBP in Ohio and elsewhere have not yet been identified.  Some papers report that colorful biofilms on trees may include cyanobacteria as well as Trentepohlia spp.  Thus, the condition may involve more than one organism.

However, the bottom line is that RBP appears to be an innocuous condition.  There’s no evidence it represents a threat to overall tree health.