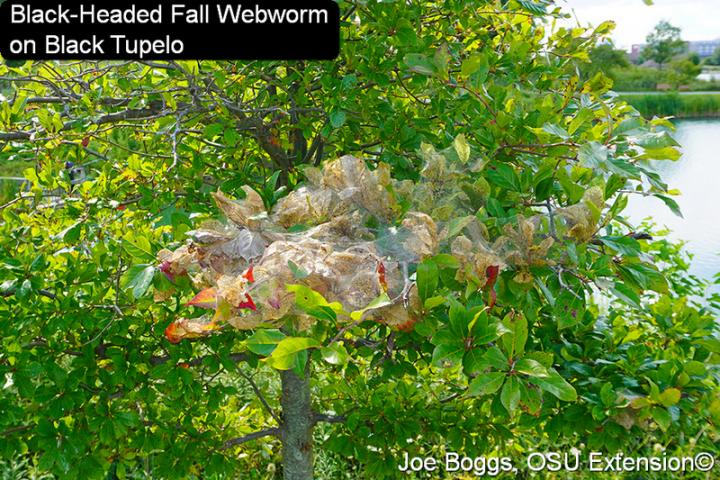 An Alert on Fall Webworm (Hyphantria cunea, family Erebidae) was posted a short time ago on July 27 and titled “Fall Webworms Rise.”  That posting provides a much deeper web dive than will be presented here.  You can access it by clicking this hotlink:  https://bygl.osu.edu/node/2023

Several significant developments have occurred since that time.  First, Curtis Young (OSU Extension, Van Wert County) and others have reported that webworm nests are widespread and becoming very large in and around Springfield (Clark County).  Curtis noted the red-headed biotype dominates and the primary host is black walnut (Juglans nigra). 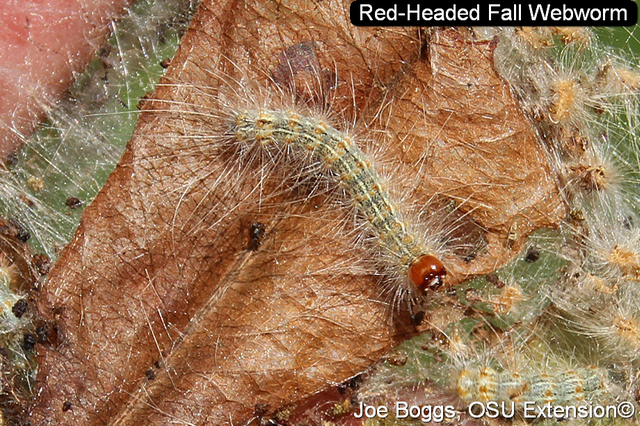 This is not surprising given the extraordinary fall webworm outbreak of the red-headed biotype that occurred in nearby Yellow Springs (Greene County) last year.  You can read about it by clicking on this hotlink:  https://bygl.osu.edu/node/1848 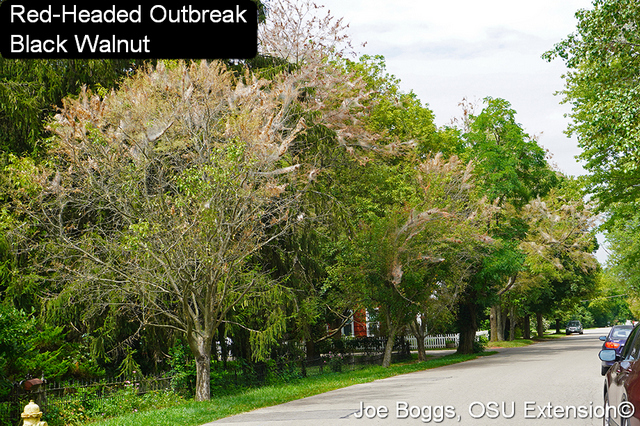 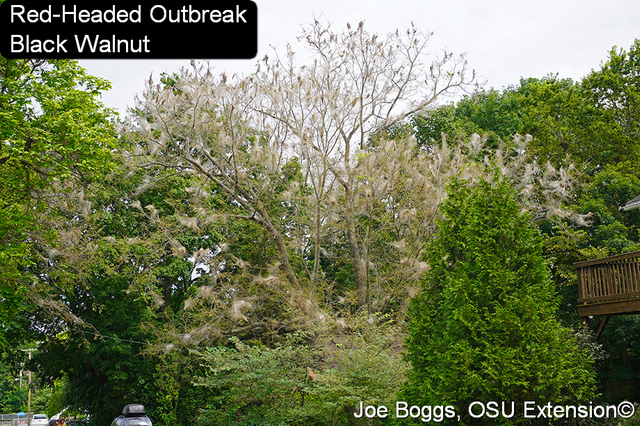 Thus far, I’ve received no reports of any localized outbreaks that compare to what happened last year in Yellow Springs.  However, a recent drive east along the Ohio River revealed widespread fall webworm nests produced by the red-headed biotype.  As noted in my previous Alert, this biotype has dominated this season and produces much larger nests compared to the black-headed biotype. 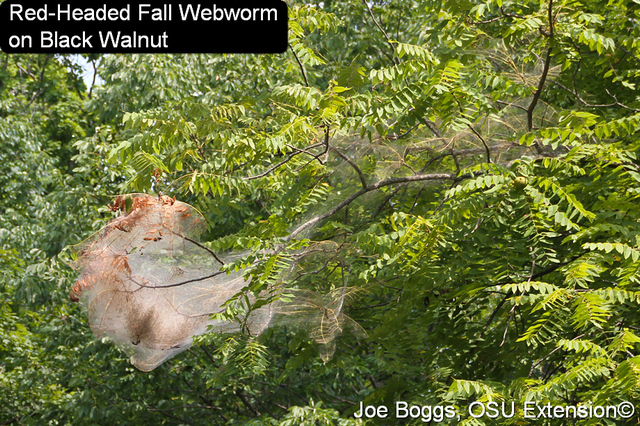 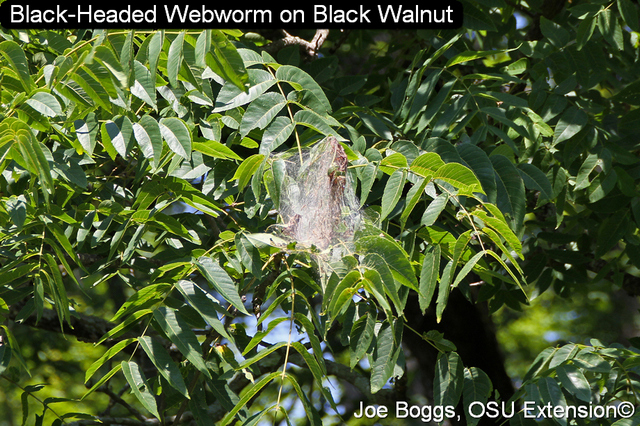 However, I recently came across a heavy localized population of black-headed fall webworms in a park in Butler County.  No red-headed caterpillars were lurking among the many nests. 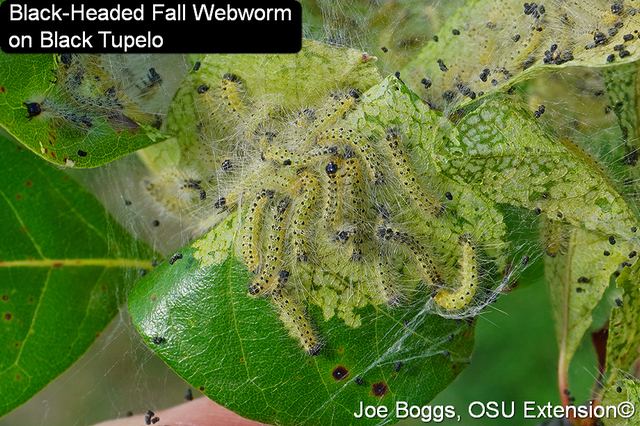 Although both biotypes have a wide host range, it’s become obvious in recent years that red-headed webworms are most commonly found on black walnut in southern Ohio.  However, in keeping with past observations, I found the black-headed biotype on a wide range of hosts from black tupelo (Nyssa sylvatica) to black willow (Salix nigra).  One large nest was near the ground on mulberry (Morus sp.) and resprouting ash (Fraxinus sp.) 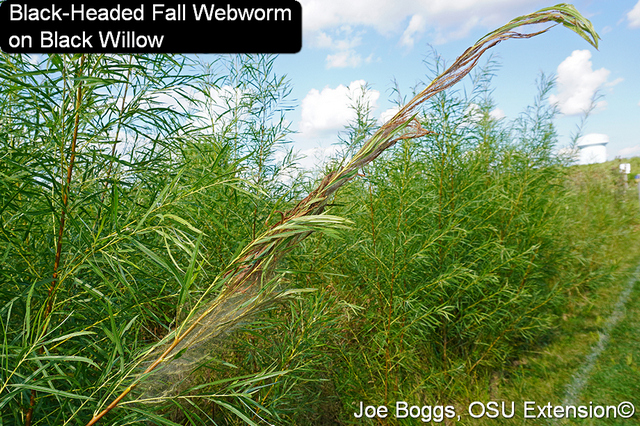 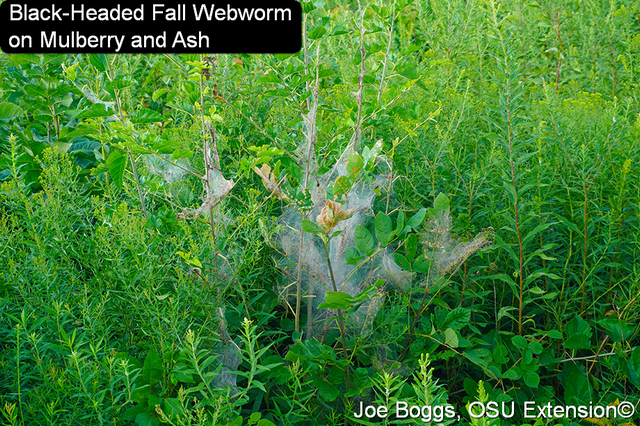 The black-headed webworms in the Butler County park also represented a wide range of instars.  As you can see from the images below, some caterpillars were very early instars. 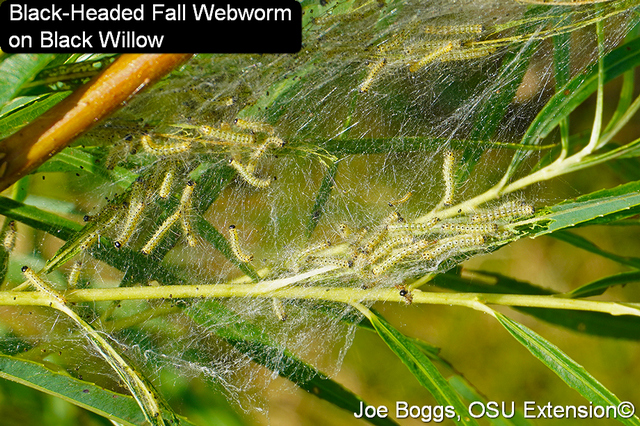 We typically see two generations in Ohio: sometimes three.  Thus, the nests usually reach their zenith in the fall (both astronomical and meteorological) which accounts for the common name.  Although it’s common to see overlapping generations, the webworms seem particularly asynchronous in southern Ohio this season.

Of course, the overwintered eggs of the red-headed biotype can hatch much later in the season compared to black-headed webworms; as much as four weeks later.  This explains some of the asynchronies between the two biotypes, but not within the biotypes.

Now You See Them, Now You Don’t

Fall webworms are native to North America.  Thus, there are many predators, parasitoids, and pathogens (the 3-Ps) that have evolved a taste for the webworms.  Consequently, heavy populations seldom reappear in the same location from year to year meaning that tree and shrub hosts rarely suffer consecutive years of heavy defoliation. 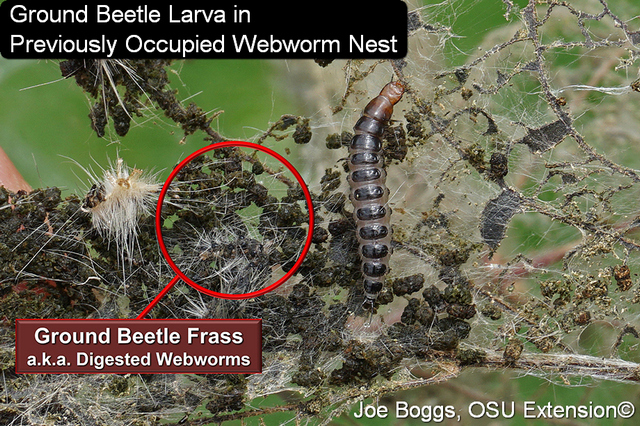 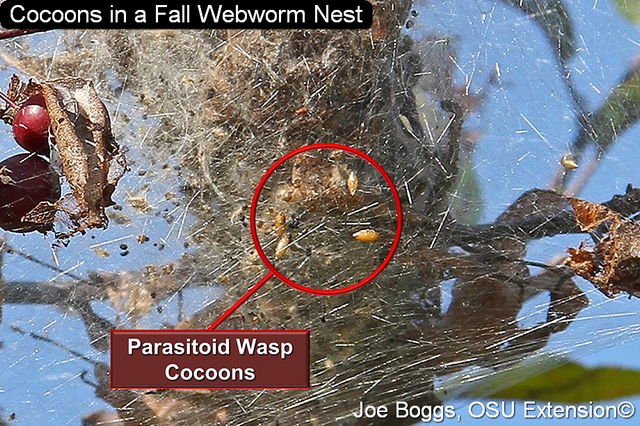 Also, the vast majority of the damage occurs in mid-to-late summer after established trees have acquired and stored enough carbohydrates through photosynthesis to support next season’s new growth.  Despite the tree’s appearance, the caterpillars cause no significant harm to the overall health of healthy, established trees.