A Minor Leafminer with a Major History 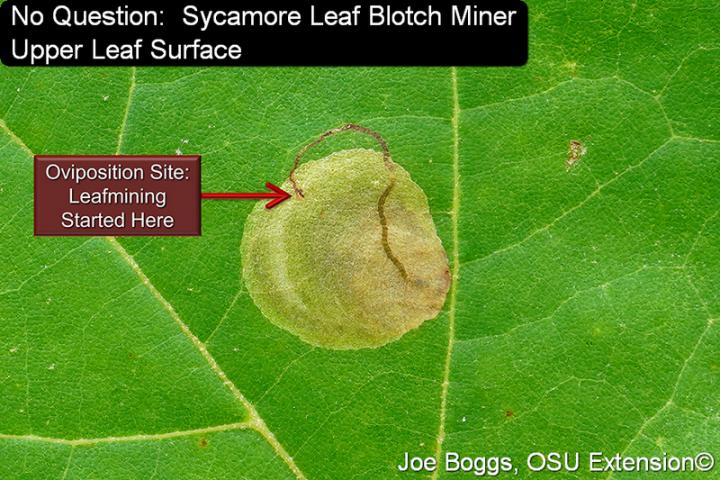 The tiny moth, Ectoedemia platanella (Family Nepticulidae), is generally called the Sycamore Leaf Blotch Miner for the lifestyle of the caterpillars on their namesake host, American sycamore (Platanus occidentalis).  Although various online references indicate the caterpillar’s host range includes other members of the Platanus genus, I’ve only ever found them on American sycamore. 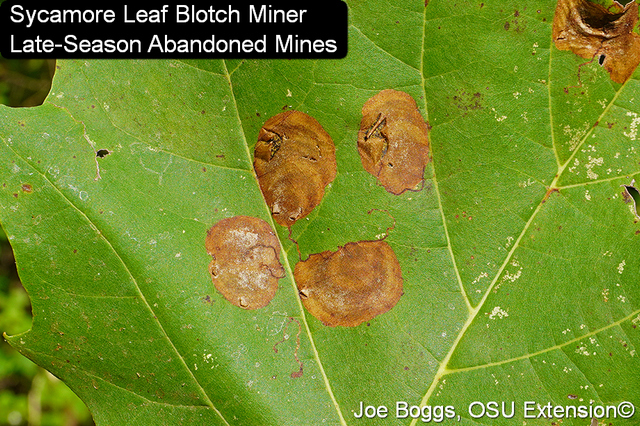 The native moth is grouped into the non-taxonomic category microlepidoptera.  This is an artificial grouping based on the small size of the moths with wingspans under 20 mm.  The micro designation has nothing to do with lepidopteran families although all members of Nepticulidae are micro-moths. 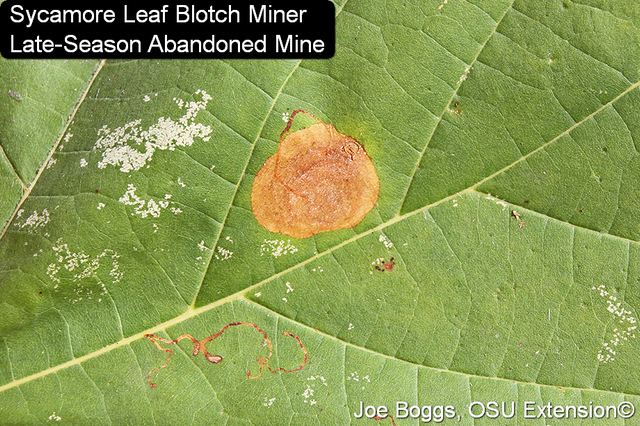 Occasionally, you will find serpentine mines that aren’t connected to a blotch mine.  This may indicate a newly developing leafmine or the development of the caterpillar was halted. 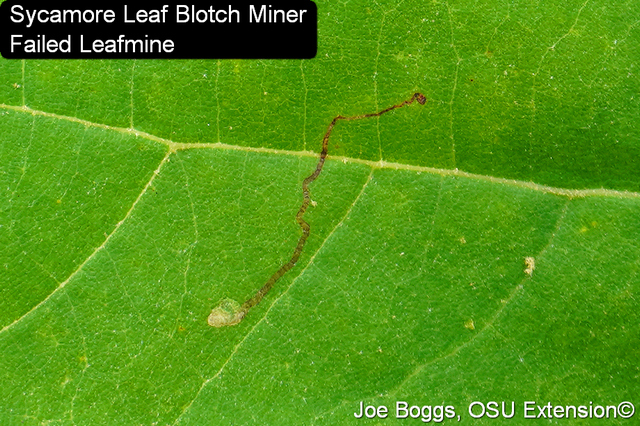 The blotch mines are at first tan to tannish-green and not very evident, particularly on the lower leaf surface.  However, after the caterpillars complete their development, the mines turn reddish-brown making them easy to spot on both the upper and lower leaf surfaces. 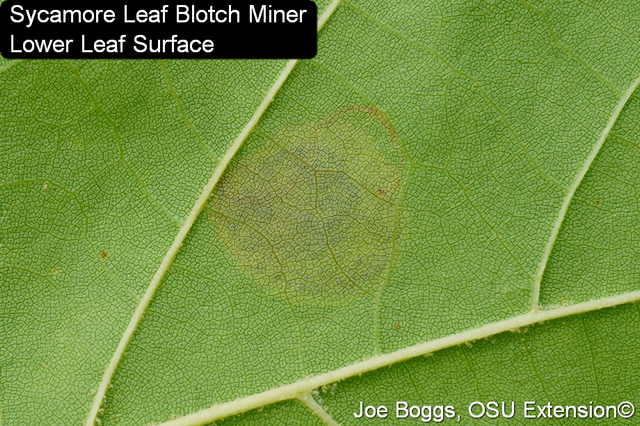 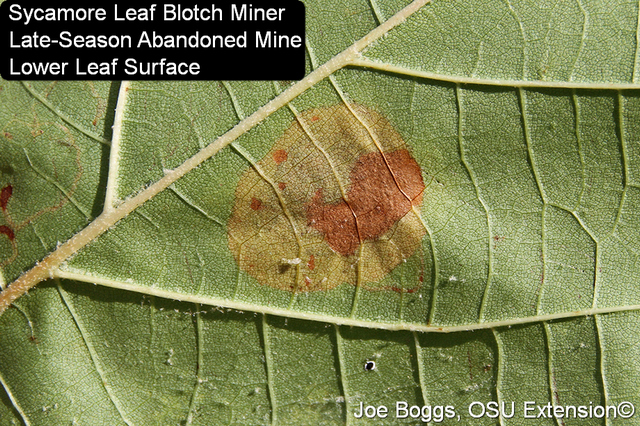 A close examination including carefully opening the mines with a sharp knife will reveal the leafmining structure and the semi-translucent green caterpillars.  However, much can be learned by using the non-invasive method of holding the leaf up to the sky to “skylight” the leafmine.  The light shining through the leaf is like having x-ray vision. 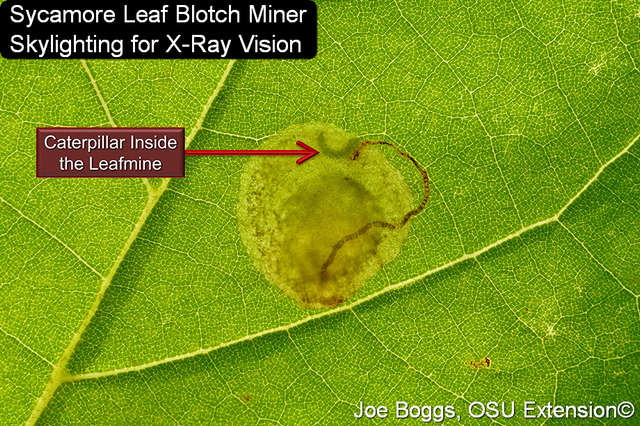 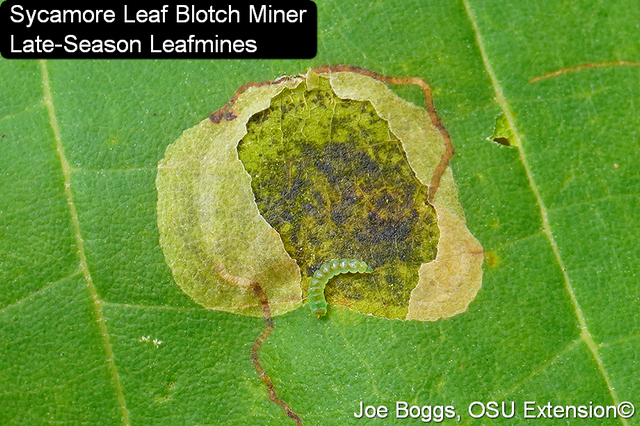 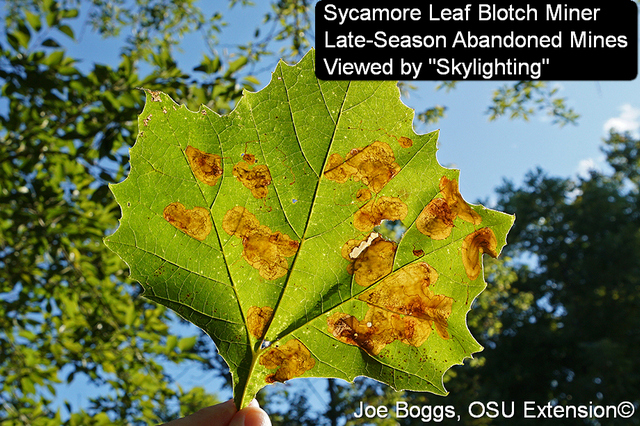 Online references claim that heavy leafmining activity can cause leaves to drop prematurely.  I’ve never observed this and have never seen enough damage across an entire sycamore canopy to warrant concern for the overall health of an infested tree, even on small trees.

However, the leafmines may be mistaken for a leaf blotch disease and I’m aware of one instance where a homeowner had a sycamore sprayed with a fungicide in an effort to halt the leaf blotch symptom.  It’s a good example of the need to seek a correct diagnosis before pulling the spray trigger. 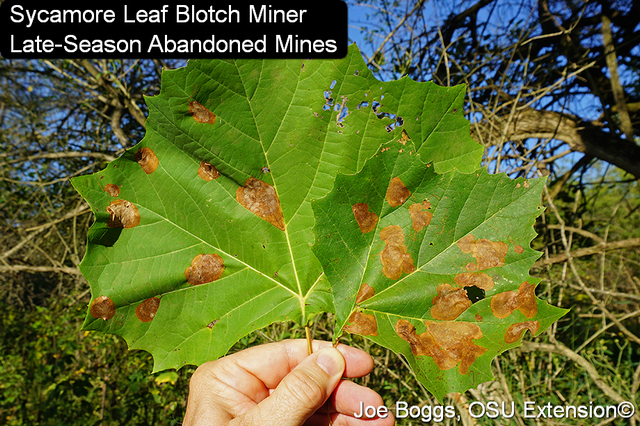 Authors of a fascinating scientific paper published in 1994 found fossil evidence that the leafmining caterpillars belonging to the genus Ectoedemia have been munching on the leaves of Platanus for a very long time.  Here's a direct quote from the paper: “These fossils indicate that within 25 million years of early angiosperm radiation, the organs of woody dicots already were exploited in intricate and modern ways by insect herbivores. For Ectoedemia and its platanoid host, we document 97 million years of continuity for a plant-insect interaction.”

I hope you were sitting down when you read that!

One consequence of this ancient relationship is that members of the genus have had very long time to succeed, fail, and diverge through natural selection.  Although I’ve used the scientific name E. platanella for the moth, the specific epithet is commonly written as the “platanella complex” meaning the taxonomy is still being clarified.